WET WET WET: End Of Part One: Their Greatest Hits 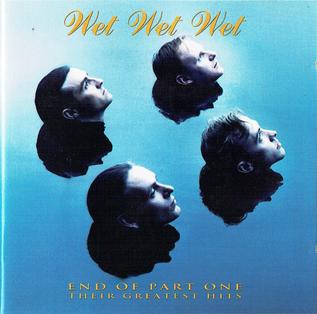 I worry about Marti Pellow. There was a recent interview with the great man in The Guardian where he admitted having in the past been addicted to alcohol and heroin, in that order. In the interview he says, albeit not without qualification, that he has been sober and clean for over twenty years. A brother died of alcohol-related causes in 2000. He is frank about all of this; he became a big star with all the superficial rewards, and the bigness temporarily blinded him.

Yes, I am supposed to be talking about a group, not simply its lead singer. But the man born Mark McLachlan fifty-six years ago in Clydebank has been its inescapable face, even though he left the band in 2017. He is of my generation, grew up a thirty-minute train ride away from me in Uddingston. We had Raw Deal (out of which came the McCluskey brothers, later of The Bluebells), Clydebank had Vortex Motion as its resident punk band. I am unsure whether they ever played as such outside of Clydebank High School but Pellow – his mother’s maiden name; “Marti” was an adaptation of his school nickname “Smarty” – ended up joining them, and after a couple of years’ hard rehearsing the band re-emerged as Wet Wet Wet, which in the Glasgow scene of the mid-eighties was enough to mark them as Not The Jesus And Mary Chain; likewise, their manager, Elliot Davis of “The Precious Organisation,” was Not Alan McGee (let alone Alan Horne).

I was not a fan of the Wets. I held the far-from-unique opinion that Pellow fancied himself so much he’d make himself pregnant. Their music of the eighties proffered little of appeal or use to me. I recognised what they were attempting to do but the overall sound picture was so glutinous and headachy – much more so than the feedback of the Reid brothers – that I saw only cabaret time on a six-monthly probationary period.

Listening to the songs on their first best-of has given me little reason to change my mind. Significantly the standout song, by several stripes, is “This Time” from The Memphis Sessions, recorded with Willie Mitchell in 1987 before they became big; a quite magnificent study in emotional stasis, rather like Little Jimmy Scott rattling bones with The Blue Nile. Otherwise I hear intelligent, finely-wrought but inadequately-expressed songs which reminded me of how sixties Glasgow soul-pop reliable Chris McClure rebranded himself as seventies all-round entertainer, nightclub owner and pantomime stalwart Christian. Less Sam Cooke, more Sydney Devine. Likewise, “Blue For You,” from their dully-finessed second album Holding Back The River, here appears as a live performance, from the Royal Albert Hall in November 1992 (with only three days’ notice to rehearse their entire set with a hundred-piece orchestra), and it is as if compromise has been dusted down and thrown off the yuppie handcart – this is a quietly thunderous performance.

High On The Happy Side, here generously represented, marked the point where the band decided to fuck it and do what they wanted, and again one is witness to the sound of adults, not obedient children having their hair combed back to make the best of impressions at the end-of-term prizegiving ceremony. It didn’t last, however; the two new songs from 1993, recorded with Nile Rodgers – does Rodgers even remember recording them? His sorely candid memoir, Le Freak: An Upside Down Story of Family, Disco and Destiny, which I read while in hospital three years ago this month (well, about a month and a half afterwards; they were too busy trying to keep me alive for me to indulge in any reading), suggests that this might not be the case – are efficiently anonymous, and it was in this form that End Of Part One was initially released, in November 1993.

Then came the movie, and the cover version.

1994 was the year in which Nick Hornby’s novel High Fidelity was published, and despite its very acute passages on mortality, emptiness and the aimlessness of a life spent jumping from island to island, avoiding anything approaching commitment, and despite the high probability that a peripheral character, who makes only one brief, albeit central, appearance in the novel, is based on me, it is difficult to evade the feeling that a desperately wrong turn has been taken; here we have affluent relationships, where nothing, not even parental cancer, is really ever at stake, where people do indeed jump from relationship to relationship as the whim or the desperation takes them, such that a rather unattractive crossword puzzle or abacus of needlessly interweaving connections is formed, where seriousness is invariably shaken off with a wry shoulder shrug, even when the multiple clues which Hornby provides throughout the book leave us in no doubt that Rob Fleming is at best one step away from being Patrick Bateman (and that is one of numerous reasons why American Psycho is the greater book – Ellis allows Bateman to plunge into the bloodied emptiness which Hornby, being an All-Round Good Bloke, can only imply).

Far, far worse, however, is an incipient reactionism which very much resembles the long-held grudge of a middle-aged man given the rejection slip by the NME at an impressionable age and duty bound to take his extended revenge. High Fidelity marks the beginning of the New Anti-Seriousness in Britain, where under a completely misguided misreading of the principles of socialism, the only music now worth considering is that purposely furnished to provide the masses with what they want. It sets its bias in favour of the mass consumers and against the creative individual (since new ideas are now considered de facto Thatcherite) with such matey virulence that any attempt at making genuinely new music – or writing about it, or because of it - will now be routinely scoffed at as elitist and pretentious, an act of treacherous individualism against The People. This way lies the Exhibition of Degenerative Art, not to mention Nuremberg.

At the end of High Fidelity, Sonic Death Monkey – the kind of invented group name which could only have been invented by someone who despises new music with all of his blackened heart – become Backbeat, and noisy experimentation gives way to “Twist And Shout.” This cosy scene is depicted as a happy ending, and to this day it chills my blood to the colour of lapsed vinegar.

The triumph of Four Weddings And A Funeral, and “Love Is All Around,” gave early warning that the Hornby side would win this argument by means of sheer demographic weight. The film is a deviously constructed snakes and ladders board of nothing very much, except finding ways to delay Hugh Grant and Andie McDowell from ending up together. Is it the act of a spoilsport to point out that there is so much more to Auden than having his words traduced to the level of Rent-An-Elegy? Or that Kenneth Griffith’s ancient madman – played by the same man who spends much of the first half of the final episode of The Prisoner delivering an extended lecture on the varying nature of revolt – provides the film’s only spark of actual life? In the end we are presented with a toytown Britain of bright bricks of placid agreeableness; like the Village it looks new and colourful and beneficent, but try straying a millimetre out of its hidden boundaries and see how quickly Rover is unleashed upon you.

“Love Is All Around,” as re-interpreted by Wet Wet Wet, would seem sufficient reason for any Number 6 to want to kick his radio speakers in (only to have them speedily replaced by an electrician five seconds later); as written and recorded by the Troggs in the autumn of 1967, its “feel it in my fingers” mood and dazedly floating music place it as late period pop-psychedelia. Typically for the Troggs, it was slightly out of time – the Autumn of Love was deteriorating into the Winter of Big Ballads – and their slight clunkiness when approaching a ballad was to be expected; but the stylistic conflict works (“Any Way That You Want Me” was their other slow-burning classic, and Spiritualized at least understood its greatness sufficiently to cover it) in such a way that you want to believe Reg and the boys that such peaceful disorientation and rebuilding could still happen. In other words, even with a band of blundering beefcakes like the Troggs, the original works because of its subtlety.

Richard Curtis, who wrote the screenplay for the film, offered the band a choice of three songs to cover; “I Will Survive,” “Can’t Smile Without You” and “Love Is All Around.” It was immediately decided that the Troggs song was the only one with which the band could really do anything.

Nonetheless, you know that disappointment is imminent when the bombastic drums and overwrought rockist guitar which open Wet Wet Wet’s reading give way to Pellow’s utterly shade and nuance-free delivery. Enticement and charm are replaced by robustly ruddy bellowing, everything highlighted in CAPITAL LETTERS just in case you haven’t long since got it. Pellow doesn’t waste time in adding entirely irrelevant asides (“Got to keep it moving!” – but why, if love is allegedly all around you everywhere you go?) and there is a particularly unpleasant Glasgow pub belch of a “Hey!” at 3.02.

Yet it gave off the correct signifiers of Soul and Passion and Et Bleeding Cetera and people were evidently happy for Pellow just to pull the approved faces. Since it became 1994’s biggest-selling single in Britain, spending fifteen very long weeks at number one, the presumption was that Pellow would turn around, give a wry shoulder shrug and genuinely wonder what was wrong; after all, wasn’t he simply giving the people what they wanted, as opposed to giving people things they didn’t know they wanted? Didn’t Reg Presley himself give it his approval? Didn’t it buy at least one band member their house (it did)? But given everything else that was available to the music lover of 1994, it would seem that the success of “Love Is All Around,” a record which appears to argue that Engelbert was the real point of 1967, looks like one of the biggest disasters in all recent music – if we’re talking long-term consequences.

To their credit, the band ended up holding a similar view, deleting the single after those fifteen weeks at the top on the reasonable grounds that they were sick to the back teeth of it. Jarvis Cocker appeared on Top Of The Pops during this period, producing a sign from beneath his jacket proclaiming “I HATE WET WET WET”; Pellow, again not unreasonably, wanted to punch Cocker in the gob. Perhaps he might feel the same about me in the remote chance that he reads this. It would be a shame. The guy clearly loves music. I remember a feature about him on Network 7 back in the eighties where he went through his singles and talked about how much he loved The Clash and Prince (there is a preponderance of Prince-esque vocal gulps throughout the first album). At the same time as High On The Happy Side, the band put out an album of covers entitled Cloak & Dagger, credited to “Maggie Pie & The Impostors,” which demonstrates their impeccable tastes – Todd Rundgren, Tom Waits, Carole King and Smokey Robinson are all represented, as are their Dundee antecedents The Average White Band. We could have a fine natter in the pub, if only I went to pubs any more (I have not set foot in one for over a decade). But even, or especially, then, I kept on thinking to myself; is he happy? I still worry about him.

Posted by Marcello Carlin at 12:19