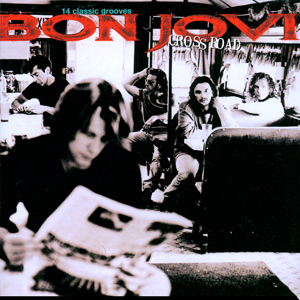 ** Track included only on the “international” (i.e. non-North American) edition

The largest-selling album in 1994 Britain – it went six times platinum – and I understand why Bon Jovi were (and maybe still are) so popular, but that doesn’t mean I have to concur with their strident non-specificity. Nothing here is terrible, but neither is anything here particularly inspiring. One would expect to see this on the CD shelf (there can only be one shelf) of that nice couple with terrible music taste in High Fidelity as evidence that they like to “rock” now and again.

This itself is a hopelessly naïve outlook, I know. I’m not immune to “Livin’ On A Prayer” just as you aren’t. I could tell you about a sunny Saturday sunny evening in, was it 2003, when a procession of some of this country’s most distinguished music writers – I won’t name names; you remember who you all were – ambled down Exhibition Road, SW7, to the distant but very audible strains of Bon Jovi performing live in Hyde Park. Every one of us, including me, roared out the words to “Livin’ On A Prayer.” How could one not? “Don’t Stop Believing” with Peter Frampton voice-box, frighteningly authoritative percussive keyboards, and a call to well whatever it was a call to.

Everything in Bon Jovi’s greatest hits does exactly what you expect it to, at the precise time when you expect it to happen. Well, almost everything; when playing the album yesterday evening, via an ancient charity shop cassette tape, the inevitable happened – the tape snarled up, gurgled for a bit and then ground to a halt. Funny how 100% of the cassettes that we have which we like still play perfectly, some after forty years of action.

The experience wasn’t initially unpleasant; indeed, there was something accidentally revelatory about listening to “Always” and hearing Jon Bon Jovi inadvertently turning into Tom Waits (thereby making it a far better performance). “Bed Of Roses” would also make a great Waits ballad. Nevertheless we YouTubed the rest of the record and yes, it’s efficient, it’s purposely inconclusive politically and sociologically, and “Runaway” is naff enough to pass as a 1979 Toto B-side.

So much of this music could soundtrack those dysfunctional TV movies you used to get, starring people like Brian Dennehy, Judd Hirsch, Tyne Daly and Linda Lavin, which invariably ended with an extended courtroom sequence (inexpensive set, much opportunity for grandstanding acting) – hearing “Never Say Goodbye,” you can immediately see the closing frozen shot of the protagonists emerging triumphantly onto the front steps of the courthouse and raising defiant fists. If that’s how you like your rock tea brewed, then Bon Jovi is for you. Thinking of what I previously said in this tale, I wonder how much better this record might have been had its songs been sung by a fifty-six-year-old Connie Francis.

Posted by Marcello Carlin at 10:54