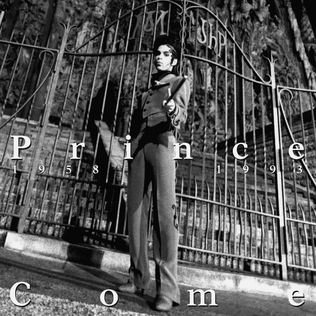 Come is one of the most avant-garde of British number one albums. It works precisely because it doesn’t know just how avant-garde it is. The sell-by dates on the minimalist cover – design-wise, it feels like an official bootleg, or a Kill Rock Stars indie drop – indicate that Prince had had it with being Prince. He owed his record company some product and barely concealed his resentment at having to do so. His suggestion was that Come and what eventually came out as The Gold Experience, material for which was recorded more or less at the same time, be released simultaneously – the former (dark and experimental) under the Prince brand, the latter (bright and commercial) under the Love Symbol/Squiggle/Squidgy alias. Warners were highly dubious about the potential effectiveness and commercial subtext of this and sat on The Gold Experience until 1995.

Yet Come appears here and The Gold Experience, despite including Prince’s only UK number one single as a performer (“The Most Beautiful Girl In The World”), does not (it made number four here in 1995, amid greater competition). That should signify something, even if it were Prince’s least compromising record since The Black Album.

The cover, which sees a marooned Prince contemplating non-existence in the cobwebs of Barcelona’s Basílica de la Sagrada Família, constitutes hospital nightmares, but the music could have been made last year, had Prince survived until 2020. The record’s centrepiece is the eleven-minute title track, which steadily builds up its funk before dismantling and reassembling it in unexpected but logical combinations – bitonality is patiently introduced into the song’s flow and the antiphonal relationship between horns and rhythm would not be out of place in the recent work of Kamasi Washington. It becomes systematically more disturbing as it proceeds.

This necessarily overshadows the rest of the record, or at any rate leads into it, but the diffusely tight funk matrix persists. In “Loose!,” we even glimpse some familiarity with hardcore European rave and New Beat trends. “Papa” begins as a bottom-of-a-rootless-well lament before settling back into a barbed barber’s chair of devant-funk.

Perhaps most extraordinary of all is “Solo,” which features Prince’s voice set against a solitary and melancholy harp. It is like hearing Billy Mackenxie singing the Cocteau Twins’ “Beatrix.” “Letitgo” is perhaps the most “commercial” thing here – with an irritatingly familiar hook (who went on to sample it?) which nevertheless keeps building up until the atonal guitar feedback and Vanity squeals of consummation conclude the record.

Come is a record of tremendous importance, as evinced by how D’Angelo would examine and expand its template two years hence in Brown Sugar – and quite more relentlessly in Voodoo four years thereafter – and how Frank Ocean, the true inheritor of Prince’s mantle (but count in Thundercat, Flying Lotus, Kendrick etc. etc. – why not?), magically put all of the ingredients together and made a new and momentous recipe out of them. The smug indifference lent to Prince's post-1988 work tells us more about the institutional ignorance of (chiefly white) music critics than anything in the neighbourhood of general wisdom. We will not glimpse Prince in this tale again. But in many important ways, we will be unable to stop seeing him. We remain unable to do so; consider how the opening track of the final album released in his lifetime culminates in the chant “If there ain't no justice then there ain't no peace,” consider what happened in Minneapolis the other day, and consider how painfully his time has, albeit posthumously, come.

Posted by Marcello Carlin at 10:58