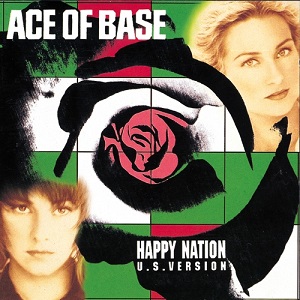 It's the Bermuda Triangle of pop, isn’t it? Here we are, addressing one of the biggest-selling pop albums ever – twenty-one million copies sold worldwide and counting - and possibly one of the greatest pop albums ever made, and you’ve probably never heard it. So do me a favour. Go and buy a copy of this album right now. Order it online because you’re not going to find it in most record shops or even supermarkets. It is as though Happy Nation has been deliberately blotted out of existence.

One potential reason why you might find yourself bemused by the Happy Nation phenomenon is that in the United States, there is an album called The Sign, which is the same as Happy Nation – U.S. Version albeit in a slightly different order and minus four tracks but which still went nine times platinum in its own right. To complicate matters further, an album entitled Happy Nation had been released in late 1992 which did not include “The Sign” or “Don’t Turn Around” at all, but did include two intriguingly-entitled tracks which did not survive transition to the U.S. Version, namely "Münchhausen (Just Chaos)" and "Dimension of Depth" (and if you had the CD edition, you also got the equally intriguingly-named “Moogoperator”).

It's as complicated as the Sister Lovers/Third Album scenario, and emotionally perhaps not that far removed from the demons of Chilton. Yet Big Star, though not unfairly, get the residual critical plaudits and Ace Of Base are shrugged off as a mid-nineties aberration (or ABBA ration?) – and the absence of a definitive album, as such, has helped blinkered music observers to sidestep something which has probably exercised considerably more influence on the subsequent generation of pop musicians than certain other feted albums from its time can command.

There is also the fact that, apart from “All That She Wants” and “The Sign,” none of Ace Of Base’s music gets played on contemporary radio, thus implanting the misconception of the group possessing a rather morose pop-reggae template. This is not a phenomenon which has affected their Swedish antecedents ABBA, nor indeed their Swedish contemporaries, and probable true inheritors of the ABBA mantle, Roxette – what is “It Must Have Been Love” if not a post-ABBA song? And that is not to mention their quieter secret siblings, The Cardigans.

Perhaps the popular Ace Of Base had a few too many shadows to be comfortably resuscitated on today’s deadening “motivational” radio. There is certainly little comfort to be derived from the song “Happy Nation,” which finds the group trolling Enigma to the extent that they convert plastic New Age comfort into a prequel to the apocalypse, complete with nods to Boney M (that doomy bass narrator, the admirably scrambled Scandenglish of “For the people, for the good/For mankind brotherhood”) and a Gregorian Latin template with an acidly tragic glory worthy of Barry Ryan (“Sanctus Sanctus Hallelujah”) or the Pet Shop Boys (“It’s A Sin,” obviously).

Happy Nation itself must be the most ironic of all album titles, and its music perhaps confirms the reasons why, in spite of a six-year run of international hits, Ace Of Base were never going to be Sweden's, or anyone's, new Abba; where the latter always strove to look out onto their world, Ace Of Base gazed gloomily and downwards within themselves, as though having proceeded directly to “The Day Before You Came” without passing “Waterloo.”

“All That She Wants” was their first and biggest hit, and although it presents itself as a warning against a loose woman on the beach, a kind of gender inversion of the Brotherhood of Man’s “Figaro,” it sounds set on Ballard’s Desolation Beach, or Nevil Shute’s post-nuclear beach, all grey whirls of wind, mournfully staccato keyboards, a “Ghost Town” whistle. Linn’s lead vocal is cast as a harsher, depressed Kim Wilde; the tantalising suggestions of a major key resolution in the verses are never followed through; and throughout there is pity and even compassion for a seemingly unlovable protagonist (“She leads a lonely life,” “All that she wants is another baby…she’s gone tomorrow”). The song is sung as though everyone and everything has already gone, and it’s hardly surprising that they later gave “Cruel Summer” a similarly cold treatment, since this sounds like the Bananarama song remixed by an especially dolorous Jerry Dammers.

“The Sign” offers more apparent cheer to that template, but is actually a break-up song as vituperative as anything on the preceding number one album (“How could a person like you bring me joy?” is a rhetorical question worthy of the late Ms O’Riordan). “Get into the light where you belong,” Linn sings over a major harmonic arch, which then quite unexpectedly dives into minor gloom – “But where do you belong?” And the group’s harmonic recasting of “Don’t Turn Around” – everything moved from major to minor like shameless furniture trucks – is inspired in a way which actually provides a link for Diane Warren, who co-wrote the song with Albert Hammond, and went on to compose the chilling “Numb” for the Pet Shop Boys’ 2006 album Fundamental.

Much of this work was inspired by the fact that the group, while putting the album together, were inspired by an unnamed Jamaican reggae band recording in the neighbouring studio (who cheerfully referred to the resulting work as “China reggae”). Prior to that, they had mostly been working in the fields of techno and House music – although the name Ace Of Base had been inspired by Motörhead (“Ace Of Spades”), and the rest of Happy Nation reflects that to a degree which is not represented or much glorified today.

This has led to a fundamental misunderstanding of the group’s work. Get past the “China reggae” and we find some magnificent dance music. “Young And Proud” thrusts Italian House, that least understood of musics, back into the limelight. “Voulez-Vous Danser” is irresistible pop entirely worthy of the Pet Shop Boys. Had New Order produced “Living In Danger” or “Waiting For Magic,” both would have been lionised to this day. “Fashion World” is the most fabulous of “What Time Is Love?” knock-offs; euphoric but with a purposely empty essence. “My Mind” is genius minimalism (“Everyone…EVERYWHERE!,” “Dance…or…FADE OUT!”). Even the remixes bear fruitful exploration – the “Banghra Version” of “All That She Wants” sets the song’s key phrases against a fulsome drone and a backdrop strongly suggestive of the Human League's “Being Boiled,” making it an unwitting neighbour to Transglobal Underground.

But we have been trained not to trust pop, and so Ace Of Base have seemingly evaded our grasp (even though the fact that they are primarily a family group, incorporating two sisters and one brother, does go some way towards explaining their approach to music). And yet, impressionable young girls heard Happy Nation, or The Sign, and loved either, and remembered them as they grew up. Listen to the Lady Gaga of “Eh, Eh (Nothing Else I Can Say)” and “Alejandro,” or to most of what is on the third Katy Perry album, or to “Dancehall Queen” by their Swedish heiress Robyn, or to “Closer” by Tegan and Sara, or to “Rockabye” by Clean Bandit – if you want a memorial to Ace Of Base (which, since they still exist as a group, albeit only occasionally, is a somewhat premature thing to do), look at all of the pop around you. Is Happy Nation one of the greatest of pop albums? Oh, definitely – no maybes about that.

Posted by Marcello Carlin at 11:32