The BEATLES: Live At The BBC 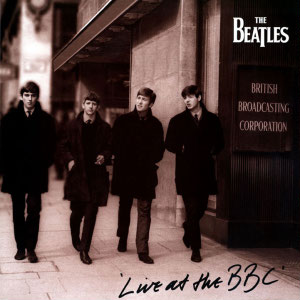 (Author’s Note: All tracks marked in italics are speech only)

For the sort of devotees whom the late Brian Matthew habitually termed “avids,” the appearance of this unreasonably generous double-disc package must have been a welcome Christmas present, but since it ended up going double platinum, its reach extended beyond Beatle buffs.

There may also be a nice logic in the fact that, in a year which had already seen number one albums by Pink Floyd, Clapton and the Stones, the Beatles should effectively close it, on the precipice of what would turn out to be the year of a chimera called “Britpop.” They haven’t appeared in this tale, as a group, since 1977, and as with the Hollywood Bowl set (and, indeed, Let It Be), there lurks a certain determination to beat the bootleggers; an exhaustive, and frankly exhausting, nine-CD set, entitled The Complete BBC Sessions, had appeared in Italy during 1993 (where copyright protection for the music had by then expired) and featured many complete radio performances.

There’s a certain level of knowing too much about certain things and people, and I can’t imagine anyone religiously sitting down and regularly listening to all sixty-nine tracks of Live At The BBC in succession; then again, that’s not what this is really about, and if you do your best to forget the “myth” of the Beatles – and Lord knows that we should try – then this is quite an entertaining album, or albums.

The performances were selected by George Martin, and Abbey Road engineer Peter Mew did his meticulous best to clean up the original tapes. Happily this is not a joyless “document,” orchestrated in stultifyingly chronological order; the selections, all taped at various BBC locations between January 1963 and June 1965, are mixed up with greater attention paid to dynamics, musical/emotional continuity and maintaining the listener’s interest.

If anything, the spoken links on Live At The BBC – studio chat between the band and the various presenters of the various shows on which they dutifully appeared, both famous (Alan Freeman – who knew, as so many people didn’t, how to deal with John – and Brian Matthew himself) and long-forgotten (the James Mason impersonator Lee Peters? Rodney Burke?) – are the highlights insofar as they remind us that no pop group has ever been as relentlessly funny as the Beatles. So much of their attraction lay in the fact that they didn’t, at this stage, chew over making music for themselves and if anybody else liked it, that was a bonus; they were young, smart, sharp and hilarious in ways that their parents’ light entertainment domestic stalwarts of the fifties could never have hoped to equal. The absence of combed obeisance here is refreshing, even a lifetime away. Kids loved tuning in for Pop Go The Beatles. It certainly beat the kind of studiously unfunny “comedy” dominant on the radio at the time (even after Hancock and the Goons) which can still be heard, or endured, on Radio 4 Extra.

But, at the end of a year in which Dookie by Green Day appeared to zip open the curtains of post-Cobain mourning and permit the readmission of sunshine and fun, there is something bracingly basic about the Beatles’ music here, from a period which many still consider their finest. At this point they didn’t have too many songs of their own to offload (“I’ll Be On My Way” was given to Billy J Kramer and the Dakotas for a B-side) so most of what we hear on Live At The BBC consists of covers.

Typically we hear much Chuck Berry (at whom John predictably exceeds – sounding prematurely fatigued by the subject matter of “Too Much Monkey Business," pensive on “Memphis, Tennessee” as though he still had the then three-month-old Julian on his mind), Little Richard (Paul is scathing on “Lucille” and the “Kansas City” medley) and Carl Perkins, but also cherry-picks whose genuinely eclectic bent, even nearly sixty years on, is still quite staggering and unpredictable – who else would have known of, let alone elected to tackle, “Clarabella,” a 1956 single by Bill Haley and the Comets splinter group The Jodimars, or Ann-Margret’s pre-emptively fuzzed-up 1961 Billboard top twenty hit “I Just Don’t Understand,” or for that matter Mikis Theodorakis’ “The Honeymoon Song” (from the almost completely forgotten 1959 Michael Powell movie Honeymoon)? And there are the known show tunes, too. Such a departure from the typical mid-nineties rock band’s narrowed staple diet of Fabs, Jams and Smiths with a sprinkling of Gibb Brothers. The Beatles would listen to, and take on, anything, and I don’t think that Paul, recently observed browsing in the Sounds Of The Universe record store in Soho, has ever lost that magpie-level intensity of curiosity.

There are uneven bumps – George doesn’t really get the Coasters (“Young Blood” with its disastrously-mispaced drawl of an opening line) and does better with the Dorsey Brothers (“Nothin’ Shakin’”) than he does with Berry (“Roll Over Beethoven”). But the inquisitive enthusiasm of the band remains palpable throughout. The live cuts (from a show called Easy Beat) include scorching readings of the Merseybeat staple “Some Other Guy” (a hit of sorts for The Big Three, whose bassist, Johnny Gustafson, would subsequently appear on records by Roxy Music) and “I Saw Her Standing There”; if the screams obviously don’t reach the nuclear levels of At The Hollywood Bowl, this all goes a considerable way to demonstrating just how big their reach already was.

Elsewhere they are practically trolling their rivals – Ringo gulps out “I Wanna Be Your Man” and their “Carol” also helps to remind the Stones who, then, were still modern pop bosses. Their “Hippy Hippy Shake” demolishes Swinging Blue Jeans, The (although it should be noted that the “Glad All Over” featured here is the old Carl Perkins tune, and has nothing to do with the Dave Clark Five). The more emotionally generous (than the original album version) reading of “Baby It’s You” offered here demonstrates just how softly compassionate John could be when he put his mind to it.

But we are, at times, also reminded of how much the Beatles needed George Martin to knock new shapes into their scruffy sculptures. This “Hard Day’s Night” is jokey and energetic but would not have changed anybody’s world (and Martin’s original keyboard solo is cut and pasted into the performance anyway, since nobody in the BBC studios could replicate it). Similarly, “Can’t Buy Me Love” and “I Feel Fine” (with intact stuttering feedback intro) as performed here come across as eager and reasonably febrile rockers but no more than that. This is not necessarily the band’s fault – the BBC studios were not Abbey Road, and all of these recordings were made in mono, with no overdubbing – but one does notice the difference between proficiency and greatness.

Nonetheless, their own shapes and strategies gradually mutate. Paul does a great take on “She’s A Woman,” the fadeout of which suggests that he has already gone ahead into the seventies. But yet, but yet, but yet, it is very evident by 1965 that they have lost something, even as (for so many) they peak. “Ticket To Ride” is here to help invent the next twenty-five years of guitar-based music, but their “Dizzy Miss Lizzy,” from the same 1965 session, sounds etiolated, slightly at one remove, already packaged, at a distance, as though the band are slowly retreating from their audience. We are nowhere near finished with the Beatles here. However, Live At The BBC is a salutary reminder of the time when their fun was transmissible. “John, go away,” a benignly exasperated Fluff Freeman exclaims at one point. But we don’t really want the Beatles to go away. Do we?