The CRANBERRIES: Everybody Else Is Doing It, So Why Can’t We? 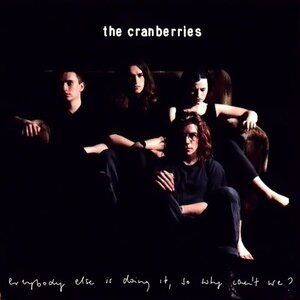 The only time I ever saw The Cranberries live was at what used to be called the Town and Country Club in Kentish Town, on Saturday 31 August 1991. They were third on the bill behind Moose and The House Of Love, and played a full set of songs, few of which turned up on their first album (although both “Linger” and “Dreams” were performed, the latter as a set-closer). I didn’t really register what they were doing; they appeared unassuming and slightly distant as though positioned behind an invisible screen of peasouper. The practised ecstasy of the music press costermongers failed to transfer to reality, as so often occurred.

The distancing was also a defining characteristic of The House Of Love. This was the second of three gigs that they played on the same evening, with a different set of songs each time. With the untrustworthy shield of Captain Hindsight it was evident that this was a PR stunt and that the group were on the crest of a dying fall; Terry Bickers was long gone, and Guy Chadwick was manfully struggling to hold the whole crumbling precipice together, despite regular assaults by an uncaring major record label seeing nothing but chart Playdoh. In any case, any observer in possession of the gift of perception would long since have recognised that Chadwick was not made of pop or rock star stuff; there was a similar gauze boundary in (in)action. He was reticent, modest, not given to the type of portentous gesture typical of stars. He murmured in the middleground; you had to try to catch the emotionalist gist.

There was certainly nothing in The Cranberries’ performance to suggest that their singer would become one of the richest and most troubled of Irish people in the ages to come, and by the time Everybody Else Is Doing It stuttered out, in March 1993, it was met with cordial indifference, as were the four misproduced E.P.s which preceded it. The shoegazing ship had long since left dock – not that The Cranberries were ever part of that self-celebratory scene, but they were lazily bracketed in as Sky Bet League One shoegazers, having failed to become the Smiths-with-Elizabeth-Frazer-singing cocktail which the music press had craved (then again, so had The Sundays before them).

Nothing happened with the record until somebody at MTV had the bright idea of incorporating the video of “Linger” (one of them, anyway – a total of three different videos were made for the song) into their rotatory schedule. The group went to the States to support Suede on tour, but halfway through it became clear that the order of bands had to be reversed; Suede, who for legal reasons had to be known in North America as “The London Suede,” meant as much to American audiences as the Dave Matthews Band do to British ones, whereas the crowds, as such they were, could be immediately transfixed by the sense of being communicated by Dolores O’Riordan, the sister of the girlfriend of the band’s original lead singer (the latter, one Niall Quinn, was on extended furlough from his own band Hitchers, to which he eventually, and amicably, returned) who could sing before she could talk, was head girl at her school (Laurel Hill Coláiste FCJ, in Limerick) and cycled to her audition with the band wearing a tracksuit. Despite being something of a musical prodigy, she left her strict Catholic household at eighteen to pursue music as she believed it should be pursued, and had a tough time of things – sleeping on floors, sub-existing on bags of chips, etc. – by the time she tried out for The Cranberries.

Anyway, interest in the band accumulated following MTV’s espousal of them, and by the time “Linger” was given a second chance they became unexpectedly popular, bought by the sort of people who didn’t even know that Slowdive was the title of an old Siouxsie and The Banshees single, let alone the name of a band. Hence the album ascended to number one here, some fifteen months after it had been released.

It's a cunning album, and leave the obvious pun out of here. Initially it seems so…reserved and restrained, and those who purchased the record thinking they were going to get lots more MTV-friendly “alternative” ballads must have been taken aback by it. “I Still Do,” despite a residual U2 determination in its rhythmic undertow, is one of the least demonstrative of album openings. Yet a closer listening will reveal that the singer is already leaving her lover. Feargal Lawler’s cymbals hiss like unexpelled snakes.

“Linger” itself is an unlikely predecessor of Alcatraz’ “Crying At The Discotheque” insofar as it is about being stood up and humiliated by a boy in the disco, as actually happened to the seventeen-year-old O’Riordan. And if “Dreams” is the album’s “happiest” song, its happiness is qualified by the refrain “it’s never quite what it seems” and the remark “Then I open up and see/The person falling here is me” – not to mention that the main backing vocals on this song are provided by O’Riordan’s former boyfriend, Mike Mahoney.

The remaining songs are about an extended and painful break-up. O’Riordan’s anger is usually contained but can explode if not watched too closely. In “How” it is difficult to discern whether she is laughing out the words or crying them. “Pretty” subsists on an immaculate stop-GO alternating dynamism with guitar and voice abruptly striking out into the foreground like the cobra missing its lion.

Not, as was lazily assumed by too many at the time, that O’Riordan was simply recycling or watering down Sinéad O’Connor since any such comparison is as predeterminedly absurd as attesting that Neil Tennant sounds like Morrissey. Female voices in early nineties rock did not emerge from a common conveyor belt; Tori Amos was different from Polly Harvey was different from Kathleen Hanna was different from Liz Phair. There is the occasional hint of Björk about O’Riordan’s singing – and her occupational hiccup actually puts me in mind of Alma Cogan - but the latter stems from a different and pronouncedly Irish tradition entirely (listen to Clannad again, and then to Mary Coughlan, and who was Ruby Murray again?).

Stephen Street produced, so of course “Waltzing Back,” “Still Can’t…” and “How” were going to sound like The Smiths (a string section periodically raises its head at strategic points throughout the album, but is neither mentioned nor is its arranger credited in the album credits). But it is remarkable, particularly on a second listening, how bitter and angry this record really is. O’Riordan cries out “Waltzing Back” as though the GESTAPO have raided her home (as opposed to her lover’s old flame popping up on their doorstep). Eventually, and regretfully, she departs the treacherous Other, and “Put Me Down” is as ambiguous and rootless a close to the album as was its beginning.

Then the anger took centre stage, and O’Riordan’s art became less focused. A second album, No Need To Argue, appeared in October 1994, and despite being hugely and globally successful (if not critically so), was kept off number one, and therefore kept out of this blog, by entry #514. Much of what she had to say became more bombastic and reactionary, and not just on that or other albums (Cranberries and solo). She was not diagnosed with bipolar disorder until 2015, by which time a marriage had collapsed and she became victim to depression and alcoholism. Perhaps she would have been happier singing to the echoes of Glenstal Abbey, to which her mother, an Elvis devotee, took her as a child. Her mother was the last person with whom she spoke, in the early morning of 15 January 2018, at the London Hilton hotel, Park Lane. Seven hours later her body was found in the bath; she had accidentally drowned as the result of a sedative cocktail of mini-bar alcohol and prescription drugs. She was forty-six. “But I’m not sorry if I do insult you,” she sings on “Not Sorry,” possibly to herself.

“If this is not profitable business with a vengeance, I challenge all the enterprise on earth for success. I often think that I was born to live on cobwebs and rainbows, and to have accounts nowhere only in Jack Delay's Bank, where I never get principal or interest; but there's good times coming, as the sailor said when he was drowning, ‘I might catch a spar of the wreck yet.’”

(From the introduction to the 1880 anthology The Lays And Legend Of Thomond by the Limerick poet Michael Hogan, a direct ancestor of Noel and Mike Hogan of The Cranberries)

Posted by Marcello Carlin at 13:09