Eric CLAPTON: From The Cradle 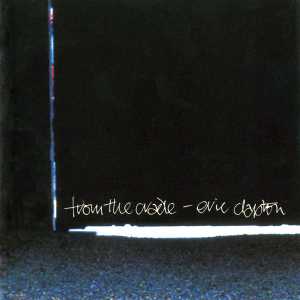 It's quite fitting that Clapton’s only solo UK number one album is his most determinedly purist, even though the record thrives on strands of impudent impurity. I think his focus on electric blues far outstrips his overly polite forays into “classic” blues. It acknowledges and underlines the absolutist importance of modernism.

Look at Martin Scorsese Presents The Blues: Eric Clapton, a perfectly decent 2003 anthology which doesn’t go beyond 1970, though does reference John Mayall’s Blues Breakers With Eric Clapton album from 1966, a great album which I didn’t realise was great until I unknowingly heard it through the speakers at Ray’s Jazz Shop. It is such a great record because, while faithful to the concept of the blues, it doesn’t forget to be a pop record too, and perhaps also an experimental jazz record on the side – the young Alan Skidmore pops up now and then to make some rather barbed, stern comments on tenor.

The anthology includes nothing from From The Cradle, but starting with the ferocious Hubert Sumlin roar which announces “Blues Before Sunrise,” one realises that this represents Clapton back in his element for the first time in nearly thirty years. And yes, he is perhaps trying to be Elmore James vocally, and that may be unnerving for people familiarised with the placid stupor of “Wonderful Tonight,” but this is unavoidably vital music. Or at least tries its best to be.

The invention carries on throughout the lengthy “Third Degree,” in which Clapton attempts to justify his protagonist being a 100% shit. “Bad luck is killing me,” he intones, as though about to consume his last packet of prawn cocktail crisps on Death Row. But there are also subtle jazz guitar chordalities out of Jim Hall. We have to recall that this may all be symptomatic of premature parental bereavement – though there is too much unclenched anger here for something like “Tears In Heaven” to feel comfortable. “She had the nerve,” he attests four times in “Five Long Years” – four rhetorical bangs of the judge’s gavel, the fourth deliberately slower-paced – before proceeding to the blindly outraged payoff: “…TO PUT ME OUT!”

Things otherwise become a little too comfortable. Nothing here is terrible, but too much of it is too damned reverent. With Clapton’s “Hoochie Coochie Man,” one is slightly reminded of Craig Douglas essaying Sam Cooke. It all starts to get a little samey, a little so-what-this-is-1994-for-heaven’s-sake.

But then, on “Sinner’s Prayer,” something happens. Something in Clapton wakes up, realises that the blues are not all about textbook reproductions but about pouring one’s self into the music, letting whatever “everything” is come out. He maybe remembers what attracted him to the blues in the first place. From the patient launchpad of “Lord have mercy…Lord have mercy on me,” he leaps up like an abruptly-aroused jaguar – “if I’ve done somebody wro-HONG, LORD!,” “I used to HA-HA-HA-HA-HAVE plenty money,” sung as though slashing his chest with barbed wire, or laughing at his own damnation.

“Motherless Child,” a Barbecue Bob (Robert Hicks) song, not the old spiritual, is a surprisingly successful acoustic jug band exercise in the manner of McGuinness Flint – not that far-fetched a comparison, since the drummer on Blues Breakers With Eric Clapton was Hughie Flint – but “It Hurts Me Too” is startlingly modern, with near-atonal punk guitars from both Clapton and Andy Fairweather Low and piano from Chris Stainton which in places recalls John Cage. “I WON’T STAND TO SEE YOU PUSHED AROUND!” roars Clapton, telling that Jon Spencer Blues Explosion and G Love & Special Sauce who’s blues-at-one-remove boss. Clapton’s solo at the climax of “Someday After A While” is strangely exuberant but sounds liberated; note the throat-clearing coda.

In “Standin’ Round Crying” he sounds a reborn child (“yew-aynt-nuthin-LAAIKE you used to be!” “When I was DEEP in LOVE with ya!”). And, while the concluding “Groaning The Blues” doesn’t really touch the hem of Otis Rush’s garment – not that it doesn’t try – Clapton’s is quite a spectacular rendition, topped and tailed with rippling, wall-smashing guitar codas which not only remind us specifically of Hendrix, but also of Pete Townshend’s comment that, much as he liked “Layla” as a song, he preferred Derek and the Dominos thrashing it out rather than politely, acoustically crooned on MTV Unplugged. Electricity, dynamism, life. Note Clapton’s stentorian growls, the parched earthquakes that he makes of “STARVATION” and “DESERT SUN,” Stainton’s tremulous piano responding to “shake down in my bones,” and the final, gnarled shout of “MURDER!” which is more than worthy of Nick Cave. Blues out of the country, from the cradle, and into the city, where no obviously palpable grave awaits. But perhaps a second, conscious childhood is to be witnessed.

Posted by Marcello Carlin at 12:28