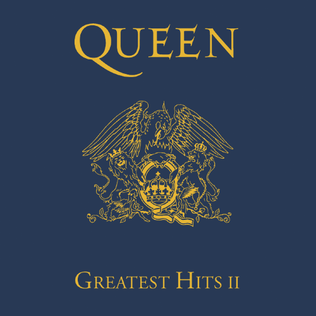 The album was not scheduled or designed as a memorial to Freddie Mercury, who was still alive at the time of its release. It was intended as a tenth-anniversary sequel to the band’s original Greatest Hits volume – Queen: The Second Ten Years, if you would – and pulled off the same simple trick as its predecessor, namely making one listen to these songs in a new and perhaps more refreshing context.

Given my generally glum reviews of those other eighties and early nineties Queen albums which did make number one, and my pointed commentaries on various NOW entries, I wasn’t expecting too much from Greatest Hits II. Yet I found it an engaging and compelling listen – so much more fun than ploughing through the albums, as such, which again indicates how Queen really excelled as a singles act (although some of the early 45-edit fades here make one impatient to hear the full-length album versions of these songs).

As with their first Greatest Hits, it astutely avoids dull chronology in favour of a more balanced menu of songs. Hence “A Kind Of Magic” works as a hi-there/come-on-in/welcome-to-our-world introduction: we are Queen, we cannot help but be big, or sound big, and we want everybody and everything to get along. Then we are introduced to special guest star David Bowie, who appears on the only track here to be extracted from their problematic (the opinion of others) or most intriguing (my opinion) Hot Space album. Who was responsible for what in “Under Pressure”? Was Bowie using the concept of Queen to push his vision along, or do the band fundamentally own the song? Chris O’Leary has given us a fuller picture of the song’s genesis (and I agree that the performances of both singers propel the song from the land of cliché into something approaching greatness). In that momentous month of November 1981, the record just seemed right, and its anonymity (the single cover was plain black with white lettering, as with “Anarchy In The U.K.” half a decade before, and the record’s cut-and-paste stock footage video was edited by Top Of The Pops to exclude footage of explosions in Northern Ireland. Moreover, the song was pointedly not included on the band’s first Greatest Hits volume, probably because of EMI’s anxiety that if people bought the album with the song on it, they wouldn’t buy the single) was as effective in its genially monochromatic way as the second side of Low. Sadly there was no room on Greatest Hits II for “Body Language” or “Back Chat,” but the non-specific utopia described in “The Miracle” from eight years later perhaps explains precisely why Bowie was needed – he moves the band’s outlook from a bucolic “oh why can’t we all just get along nicely with each other?” to a (vocally) more focused “we need to do better or we will die.”

But the band came back in 1984 with The Works, an album which indicated that they had been listening carefully to what had been happening around them. I have little to add to what I previously said about “Ga Ga” or “Break Free” – two sad electronic laments sung by a boisterous fellow endeavouring to escape from robot status – but “It’s A Hard Life,” with its Pagliacci and “Bohemian Rhapsody” quotes, is a surprisingly affecting, and in parts doomy, ballad, and “Hammer To Fall” reminded us that, when they put their minds to it, Queen could really rock. The atomic bomb versus Freddie Mercury? No contest, darlings!

“I Want It All” (1989) and “Headlong” (1991) are also exceptional rockers – were the band checking out Van Halen? – while “Breakthru” and “The Invisible Man” (both 1989) are entertaining electro-rock romps. In this company, even “Friends Will Be Friends” (1986) reveals itself as the band’s own “Everybody Hurts” (more to follow on the latter when we get to entry #462), a moving, arm-linking singalong.

I’ve said enough about Innuendo – the album following which this blog went into long-term hibernation – already, but here “I’m Going Slightly Mad” sounds even more in keeping with what was going on in that other Parlophone compilation released in the second half of 1991, Discography: The Singles Collection by the Pet Shop Boys. Actually, the band sound as though they’re having fun – including the title song, perhaps the least-played UK number one single of the nineties - that with time and circumstance being as and what they were, they no longer felt any pressure to be “Queen” and could do whatever they liked.

But I wonder how Freddie felt. Here was someone who, to my knowledge, never voted in an election – he was always abroad, on tour with the band, when elections came around – yet lived quietly in one of the most Conservative parts of the Royal Borough of Kensington and Chelsea. Queen wisely never pushed party politics (although Brian May’s subsequent support of the Green Party is well-publicised) and, putting on my day job hat, I can attest that Freddie did many important things with his legacy, with particular reference to subsidising healthcare in west London.

He may, however, have become a little bored with being in Queen, and it is in this context that a song like “The Show Must Go On” makes perfect sense. This, along with “Who Wants To Live Forever,” is one of two songs on Greatest Hits II which seem to point directly towards their singer’s eventual demise, but just as the latter was commissioned and written for a movie, “The Show Must Go On” (with another subtle Pagliacci quote at song’s end) sounds like the lamentations of a man having reached the end of his tether; he wishes he were somewhere (or someone) else, but no, the brand’s too big, he’s got to go out there and give the punters what they want (if not what he wants).

I am almost certainly projecting here, but it is a major relief to discover that Greatest Hits II closes, not with that soaring demolition of the rock wall, but with the celebratory “One Vision..” How much more adventurous this song now sounds – its rock is hard and solid and the various electro/industrial tropes deployed throughout the record approach Yello/Tackhead realms of adventure. And the song, and thus the album, ends with a winking wisecrack. Be seeing you?