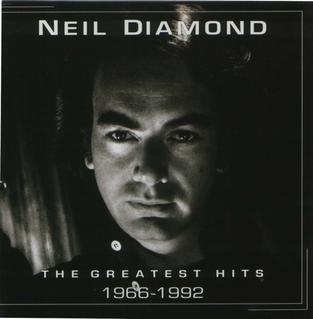 While listening to the song “America” in particular yesterday evening, Lena and I wondered aloud whether Neil Diamond was his country’s chanteur, a performer who represents his country just as surely and symbolically as, say, Charles Aznavour did France. His “America” is a country which welcomes and embraces everyone, all cultures, excludes no one, stands for everything that humanity should be.

Diamond does represent something immense in popular culture, but I idly imagined a bootleg mash-up of “America” and “Born In The U.S.A.” – it could work; the tempo and key in both songs are broadly compatible, and the rhetorical pauses more or less occur at identical moments – and thought of him as the benign other side of the Springsteen coin, the musician who appeals directly to, and seems telepathically to understand, women, just as Bruce does with the guys. He is something larger and happier than the promises of a chimerical Christmas, but also has the necessary guts to persuade his followers that he means it. He is about two-and-a-half years older than his fellow Brooklynite, Barry Manilow, and has an equal, if parallel, understanding of his audience and what they want, or need, from him (hence “All I Really Need Is You,” a 1991 song which here is represented by a 1992 live recording, to make it clear that he is singing about, and to, his fans; it is his “The Wonder Of You”).

The immensity of Diamond is one which some eyes would prefer to avert. He is fully aware that he is not, and never will be, fashionable; his hair, his clothes, are always a little out of date, perhaps could be seen as rather naff. This nails his appeal, though; the affable neighbour who abruptly soars to become larger than life while making you aware that he is singing only to you, and for you.

The cover of “Heartbreak Hotel,” that song which stopped every musician of Diamond’s generation dead and made them imagine and conjure a new world into being, also suggests the question; is Diamond the new Elvis, or a substitute for him? Does he fulfil a role which the King has obviously been unable to do since 1977? I know people who have been to see Elvis at Vegas, and Diamond at Wembley (and Edinburgh), and without exception or qualification they talk to me about how spectacular and transcendent these performances were, and always, but always, Diamond’s specific ability to address one member of the audience when there are 70,000 people in the arena.

Possibly we should speak of Diamond as a more approachable and forthright Jimmy Webb – Brooklyn toughness superseding Oklahoman reserve. Listen to “Hello Again” or “Do You Know What I Mean” and realise that he holds nothing back in his vocal projection. Had Webb penned “Cracklin’ Rosie” and Glen Campbell sung it, everybody would be talking about it as they do “Galveston.” Meanwhile, the cheery goofiness of songs like “Crunchy Granola Suite” reveals a good humour seldom sensed even in Webb’s best work (which is in itself profoundly substantial).

All of this suggests that a definitive, career-spanning Diamond retrospective would be a mighty thing indeed. As with most of his audience, he stems from the sixties; with Manilow, he was among the last of the Brill Building pros to cross seamlessly over into the pop performance mainstream. He has been everywhere and seen it all, and his followers respect that.

Unfortunately, The Greatest Hits: 1996-1992 isn’t quite that, despite its 140-minute, two CD-spanning length. Although his original Bang hits from the sixties are present and correct, as obviously is the cream of his Columbia/CBS output from 1973 onward, it was not possible to license the crucial songs he recorded between 1969-72 for Uni/MCA – which encompass most of his really famous songs – and so they are represented here by latterday live versions or studio re-recordings tailored to sound like live versions (“Song Sung Blue” in particular suffers as a consequence).

This renders some uncomfortable imbalance within the collection, so much so that one was tempted to dig out a decent compilation of the original Uni/MCA recordings – in our case, 1994’s The Best Of Neil Diamond, which I may even have bought to supplement The Greatest Hits, with its liner note by John Howard. What it means is that the grittily light sixties folk-bubblegum sides (produced by Jeff Barry and Ellie Greenwich) are abruptly succeeded by growling live performances from a generation later. Diamond is clearly having a lot of fun playing around with his own songs – he does “Red Red Wine” as reggae, a year after UB40’s cover had belatedly gone to number one in the States, complete with the toasting section – but these renditions are not definitive and their incessant accumulative nature makes me think of Samuel T Herring, the chest-beating frontman of Future Islands.

Then again, they do demonstrate the amiable power of Diamond as a stage performer, and the version of “I Am…I Said” included here does not fade out on the chorus, as the 1971 original does, but focuses on a mournfully enraged coda of repeated and incrementally intense “Oh, no”s, as though Lear has been faced with the abyss of emotional and spiritual emptiness (but think of the fact that Diamond had a top five hit with a song essentially about existentialism – “to no one there…not even the chair”; do I sense Cohen’s “Dress Rehearsal Rag” on the other side of that wall?). I have seen him perform the song on ITV’s 2008 special An Audience With Neil Diamond – and it was powerful and unsettling.

From there we drop back to 1973 and the Jonathan Livingston Seagull musings – in Jimmy Webb terms, not that far away from “The Moon Is A Mistress” et al – indicate a general and very patient slowing down of Diamond’s muse. He is now happier to contemplate life than to rush and bustle through it. “Beautiful Noise,” produced three years later by Robbie Robertson, is synth-pop before the latter quite happened. Then, three further years down the line, producer Bob Gaudio fashioned some delightful pop which recalled the vitality of the Bang/Uni years, including the ode to anti-capitalism that is “Forever In Blue Jeans.”

The essence of melancholia persisted, however; “September Morn” is a quite superb torch ballad which suggests alternate paths which both Tom Waits and Scott Walker might have pursued. “You Don’t Bring Me Flowers” – an original bootleg mash-up of two separate but complementary readings of the same song – reminds us of a stilted semi-conversation between two old Brooklyn hands (both Diamond and Streisand attended Erasmus Hall High School in Flatbush at more or less the same time, though didn’t especially know each other back then).

If “September Morn” bears an underlying Continental feel to its gait, that is because Diamond co-wrote it with Gilbert Bécaud – and “Love On The Rocks” was their other major joint composition. By the time the eighties came around, some figures suddenly found hat commercially things had become very hard going. Not everyone made the transition, though the gulf was noticeably less wide than that in turn-of-the-eighties Britain, when so many sixties and/or seventies chart regulars abruptly fell by the wayside. Nevertheless "Love On The Rocks" might serve as a useful barometer of people fallen from grace, desperately attempting to stay afloat.

The song was the centrepiece of a 1980 remake of the film The Jazz Singer, in which Diamond stars. That film is not very good, and like its 1927 predecessor it allows things to happen which should never have passed. Unlike its 1927 predecessor, it has nothing to do with jazz. Laurence Olivier plays Diamond's stern cantor father as though he were Peter Sellers playing Olivier. There are religious and familial conflicts, but all comes good at the end.

In the film, the song is played as heard, in the studio. Needless to say, the only person in the studio not moved by Diamond's performance is the composite bored, jaded Britrock star played by Paul Nicholas, who, aware of his function in this story, glumly delivers the I-just-don't-get-it verdict.

However, the song itself is striking. Bécaud was a veteran French chansonnier (whose 1975 hit "A Little Love And Understanding" is one of the most fourth-walling songs to have made our top ten) and its melancholy cadences are immediately identifiable as French. Gaudio produced what is a largely quiet but intermittently stormy performance of a song which could be about a dying affair or the relationship between artist and audience ("First they say they want you...."). Diamond gnaws down on and stretches the four syllables of the line "Gave you my heart" as though clinging to the edge of a cliff, like a suddenly reluctant lemming. The Philip Glass keyboard arpeggios which underscore the song from its second verse onwards are as potent a symbol of a distant New York as anything in "I Am...I Said."

Yet it is as if, finally, Diamond is grievously lamenting the end of an era, gone to herald a new age which may not have room for artists like him, might leave them behind. Few pop songs end in so exhaustive a fashion as the exhausted Diamond intoning that yesterday's gone, and all he wants is a smile. It is like a door closing on things good, where the future is potentially full of egocratic space-wasters wanting him to push off and take those four clowns with him. Happily, Diamond found a way out ("Hello Again"). But so many people did not, and not all of them voluntarily.

And it is almost impossible not to listen to the song’s cadences (“Pour me a drink and I’ll tell you some lies/Yesterday’s gone…and all I want is a smile”) and not imagine the slowly-dying Agnes Bain – I would imagine that this is exactly what she is hearing on her cassette player as she stubbornly allows her own life to drain away.

Then there was the E.T. tribute “Heartlight,” the catchy (and much played by Terry Wogan at the time) “Yesterday’s Songs,” and 1986’s unfortunate Ferris Bueller theme song wannabe “Headed For The Future” where it can only be noted that Diamond is trying very hard. But he persisted and continued to prosper as a live performer, and as one approaches the end of this marathon collection – 37 Golden Greats? – and listens to the sign-off of “All I Really Need Is You,” it is instantly easy to perceive and comprehend the symbolism of Neil Diamond. Sixteen years from now, his autumnal rebirth will be noted.

(And that is IT from Then Play Long for this year. I’m taking a break for the holidays and so should you. Our very best wishes to you for the season. The tale will recommence on 4 January 2021. Let us hope and endeavour to ensure that next year is kinder to us than this one proved to be.)

Posted by Marcello Carlin at 11:02