WET WET WET: High On The Happy Side 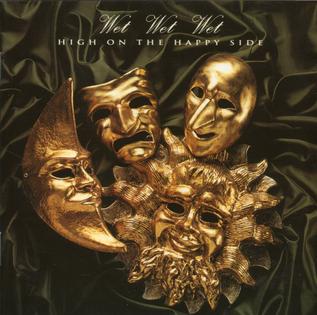 High On The Happy Side; who knows how many jangly indie bands from Glasgow could have released records under that name in the early eighties, and perhaps something of that gleeful chutzpah was sustained by the Wet Wet Wet of the early nineties. I wrote a somewhat bad-tempered review of their first album here some years ago; it seemed to me unnecessarily glossy and opaque (if that is not a paradoxical juxtaposition). My view is that Wet Wet Wet themselves came to a similar conclusion – particularly The Memphis Sessions, released in 1988 and recorded with Willie Mitchell (before their first album), had given us an idea of the band they really wanted to be – and elected to prove to us that they were not robots.

Hence High On The Happy Side sees the band stretching out, playing together, giving the impression that these are real, breathing, interacting human beings. It isn’t a perfect record by any means – there is still a little too much by-the-Radio 2-book AoR here (“Make It Tonight”) – but it is a pretty decent and inventive one, within the band’s parameters. “More Than Love” is a very fine if somewhat acrid ballad, while “Lip Service” conjures up a mythical conference between late eighties Love And Money and early nineties Primal Scream. “Maybe Tomorrow” is agreeably screwed-up lovers’ rock. “Celebration” is aptly boisterous and largely acoustic (including some flamenco flurries) while “Put The Light On” moves from mid-eighties Elvis Costello pastiche to full-throated, seafaring folk singalong (which, seeing as Donal Lunny and Davy Spillane guest on the track, is not surprising).

Even “Goodnight Girl,” the album’s big single and the band’s first non-charity number one, works quite beautifully in this context – aided to no small extent by Fiachra Trench’s sympathetic string arrangement - and illustrates just how out of kilter it was with anything else going on at the time. Its best ballad, however, is the quite spellbinding “Brand New Sunrise,” which recaptures some of the pained stasis of the Blue Nile at their most concentrated (“From A Late Night Train”) and makes me think – well, of what? It might be the musings of a moody midnight wanderer, or it might be a despairing patient, or pensioner, hoping that they can wake up again on the next day.

The band’s lyrics remain unclear. “With each song,” says the liner note, perhaps remembering Lexicon, “you will encounter a diversity of music which will tug and pull your soul in every direction. They are placed here on this album for one reason and one reason only. TO ENJOY!” And yet, in the printed lyrics, we find capitalised signifiers – “LIES,” “LET THEM COME ON IN,” “LOVE ‘N’ BITTERNESS,” “THESE ARE DIFFICULT TIMES TO BE CELEBRATING.” You don’t have to be Kevin Rowland to know that this record is not quite what it presents itself as being.

I don’t really know if anybody could understand this album fully and not be Scottish, or at the very least (or most?) Glaswegian. When Marti Pellow asks the taxi driver to take him to the station, you’d better be sure that he’s going to Glasgow Central (through which underground section the trains to Clydebank run). The predominant repeated theme in Wet Wet Wet songs seems to be the Sisyphean concept of leaving Glasgow, then returning to it, again and again, with all the confusion and indecision that stance engenders. There are private codes in their lyrics, remarks which only they (or we Glaswegians) would “get.” “2 Days After Midnite” – note the spelling, and the continuation of that American ambition – is an odd but logical closing song, rumbustious and abruptly faded out, just as Pellow cuts loose from the song’s polite straitjacket and starts angrily yelling and shrieking – punk rock? Don’t sell us out just yet?

Posted by Marcello Carlin at 10:51