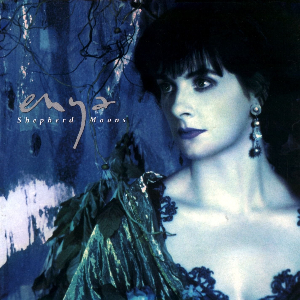 There is really nobody else in music like Eithne Pádraigín Ní Bhraonáin, or, if you must, Enya Patricia Brennan. Austere, uncompromising and formidably committed to exploring and expressing her own interior vision – one could be speaking of the Aphex Twin (there are certain sonic overlaps between Shepherd Moons and Selected Ambient Works Volume II; a nocturnal ice-skating sense of darkening infinity) or Derek Bailey (to whom Ian Carr applied the above description in his book Music Outside).

And yet Enya is not really alone, except perhaps on her music, with only discreet additions here and there (clarinet, cornet, uilleann pipes). For her music is a product of true collaboration, with her manager and producer Nicky Ryan and lyricist Roma Ryan (the two Ryans are married). It appears as symbiotic a working relationship as that of Elton John and Bernie Taupin, blending poeticism, wonder and (hopefully) transcendence.

Shepherd Moons only really makes sense as a sequel to its 1988 predecessor Watermark since the two are almost identically structured. But then one could shrug that Ramones Leave Home was little more than a sequel to Ramones. It’s a good and imaginative formula and Enya and the Ryans deploy it with great efficiency and inventiveness – although many Enya songs may sound similar, no two are precisely the same.

The Watermark mix of moodily ambient songs with strategically-positioned instrumental interludes continues - I would also observe that the rhetorical final verse key changes which form a major characteristic of Enya’s work indicate a path to the likes of Westlife (there is no way that Louis Walsh could not have heard this and been affected by it) – with the addition of a couple of well-chosen cover versions and an overall more assured approach; Enya had been somewhat daunted by the unexpected success of Watermark, but its proceeds did enable her to upgrade her studio and install better and more sophisticated equipment. She felt in no particular rush to replicate Watermark and indeed endeavoured to forget about that record as much as possible while making this one; therefore the music here felt more natural to her.

The term “shepherd moons” refers to the two inner satellite moons of Saturn, Pandora and Prometheus, which had been discovered in 1980 and were felt to protect the main planet much as a shepherd might protect their flock. The title track itself is a reasonably placid, piano-led introduction to the album, and its big single (or one of them), “Caribbean Blue,” might sound a little like “Orinoco Flow” with its abstracted talk about the Anemoi, the wind gods of ancient Greek mythology, but its canny waltz status helps differentiate it. Her voices – for there are many of her voice here, overdubbed innumerable times – flow into and blend with their sundry manifestations in a near-ahuman, or possibly superhuman, manner; the Ryans have said that the Wall of Sound and Brian Wilson were major influences on this approach.

“Ebudæ” – it is an ancient name for the Hebridean islands – is a brief study in the predominance of feeling over meaning, since it features mouth music suggestive, but not strictly reproductive of, both Irish and Scottish Gaelic; its purpose was to draw attention to the waulking songs typically sung by the Scottish cloth-weaving women of old. “Angeles,” a prayer to angels, was written specifically for, but not finally used in, the Steve Martin film L.A. Story (another Enya song, “Exile,” appeared in its stead). “No Holly For Miss Quinn,” as with Watermark’s “Miss Clare Remembers,” is a brief, limpid instrumental inspired by the title of a novel by the South Norwood-born author, and Jane Austen acolyte, Miss Read (a.k.a. Dora Saint) – perhaps Enya felt that she had been “complimented out of further bitterness.”

“Book Of Days” is about as lively as the album gets; very percussive and propulsive, if more convincing in its original Anglo-Irish Gaelic form than the English version specifically written to accommodate the plot of the Tom Cruise/Nicole Kidman film Far And Away, about Irish refugees coming to Oklahoma in search of a future, for which the song had been commissioned. “Evacuee,” with Steve Sidwell’s brass lines poignantly conjuring up a lost common history (almost on a par with what David Bedford’s brass band makes happen on Roy Harper’s “When An Old Cricketer Leaves The Crease”), is a very touching song about mother and child separation, apparently inspired by a documentary Enya watched on television about the London Blitz during World War II. “Lothlórien” – a reference to the Elvish kingdom described in Tolkien’s Lord Of The Rings trilogy – is another seamlessly reflective instrumental. “Afer Ventus” is Latin for “African wind” (more or less) and Enya sings the entire astral travelogue (and bookmark of sorts to “Caribbean Blue”) in Latin; who else in pop was, or is, doing this at all?

Enya was initially uneasy about the two traditional songs; would she be able to bring the same quiet emotional intensity to them as she did to her own work? She found that she could. “Marble Halls” is for me the most moving moment on the album; an 1843 operatic aria – from The Bohemian Girl, composed by Dubliner Michael William Balfe and the rather fiery and reckless Londoner Alfred Bunn – which she might have heard her grandparents play as sung by, say, Count John McCormack. Enya makes the song sound as ancient and eternal as the world itself, and if she, at her most anguished, can frequently sound like Sinéad O’Connor, then it should be remembered that she herself appears on The Lion And The Cobra, intoning Psalm 91 (“For he shall give his angels charge over thee, to keep thee in all thy ways. … Thou shalt tread upon the lion and adder: the young lion and the dragon shalt thou trample under feet”) in Irish Gaelic at the beginning of the song “Never Get Old.”

“How Can I Keep From Singing?” was an American Baptist hymn composed by the minister Robert Wadsworth Lowry (it was not a traditional Shaker song, as is the common misconception, although has for some time been used as a Quaker hymn) and first published in 1868. A new and much more militant lyric to the song’s third verse was written by one Doris Plenn around 1950 – “When tyrants tremble, sick with fear/And hear their death-knell ringing/When friends rejoice both far and near/How can I keep from singing?” The song’s structural similarity to “Amazing Grace” remains very apparent, but the latter lyric, which at the time of its composition was soon taken up by Pete Seeger and others, is what Enya sings here – and who, at this time in our history, could fail to empathise and identify with what she is singing?

Nonetheless, the surface serenity of the patient closer (and former “Orinoco Flow” B-side) “Smaointe...” (which translates as “Thoughts…”) masks a very real and tragic grief – the song tells the story of a church demolished, and its congregation obliterated, by a huge tidal wave. This church was located on the same beach in County Donegal where Enya’s grandparents are buried. The impermanence of people, the tyranny of memory, the unanswered, irresolvable grief – all fade into an endless eternal afterlife. Little wonder that this music spoke to, and for, so many, as surely and perhaps profoundly as Jim Reeves had done for the Irish immigrants to northern Britain in the sixties. It touched a very deep core in listeners, particularly American ones. One could wax in purpling lyricism about the snow-topped grave of Michael Furey or the mutinous Shannon waves. But it is better that we consider Shepherd Moons as the early nineties peak of music needed, craved, for purposes of calming in immensely troubled times – although, in its Irishness, its deliberate obscuring of vocal chiaroscuro and its purposive avoidance of direct lyrical comprehension, it turns out to be a very surprising kin to another album about to be (indirectly) discussed here.