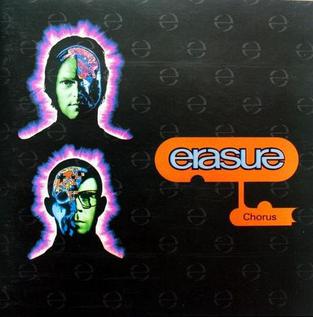 By now, Vince Clarke and Andy Bell had established themselves as Then Play Long regulars, which may serve as a tribute to the skills of the promotional team at Mute Records, but also indicates that the duo were unfussily making some of their time’s most lasting pop music.

I think it fair to say that Chorus finds them in the throes of their “imperial phase.” There are few brighter, more stimulating wake-up calls to begin an album than the title song, all the more so when one realises that Bell is singing about the systematic destruction of the environment. Clarke’s arrangement, however, is characteristically ingenious, always throwing in unexpected sonic or harmonic detours. And there are fewer better beginnings to the second side of an album than the hugely bitchy but thoroughly enjoyable “Love To Hate You,” with Bell’s Broadway-style triple-notated ascent at the top of every verse, like an electro Tom Daley ready to dive in; the song also samples the string break from “I Will Survive” when to do such a thing was inspired rather than a kneejerking benchmark. The where-is-the-world-heading sermon “Turns The Love To Anger” is also fittingly compelling in its stern velocity.

Otherwise, the pair step back and ponder, and their more thoughtful moments balance the record out in a delightful fashion. “Joan” is a patient, pleading ballad worthy of sharing a sentence with OMD’s “She’s Leaving.” “Breath Of Life” turns most profoundly on a heartbreaking harmonic modulation. “Siren Song” and “Perfect Stranger” weigh dreaming against anxiety and sparkle like Mars over Brent Cross.

But the deepest moments are to be found at the end of each side, and I am not unaware that, vocally, Bell sounds at times as though he is trolling (in a friendly manner) Martin Gore. Both “Am I Right?” and “Home” could be interpreted as songs about the singer’s determination to go their own way despite everything, or reflective/defiant studies of ageing. In “Am I Right?,” Bell is the solitary walker through the old town, determined not to be broken down by the absence of another. Yet “Home” sounds like one of the best to-hell-with-you-world odes to growing old disgracefully, borne as it is on a delicate musical cocktail worthy of prime Saint Etienne. Not as introspective or spectacular as the Pet Shop Boys, perhaps – although their live shows at the time told a different story, and Bell’s scything lyrics pull off a few really good tropes, ones worthy of Disco Tex at his sauciest – but Erasure’s quiet boffin crucible of inspiration has endured pretty satisfactorily.

Posted by Marcello Carlin at 10:12