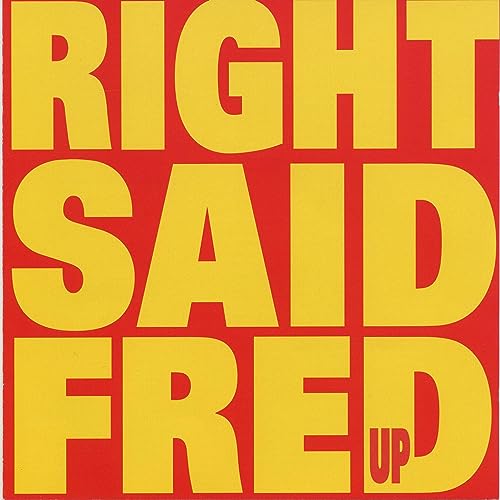 “Fred came to the foot of the tree.

Not a sound from the tree.

'All right,' said Fred. 'Stay there if you want to. But I'm going to shoot off this gun into the branches just for fun.'”

(PG Wodehouse, from “The Mixer: He Meets A Shy Gentleman,” included in the short story collection The Man with Two Left Feet, and Other Stories: Methuen & Co., London, 1917)

The Fairbrass brothers, Richard and Fred, already had history. In the post-punk era they played in a group called The Actors (who were much more gentle power pop than post-punk), which toured with Suicide and supported Joy Division as part of the “Factory nights” held at the Russell Club in Moss Side, Manchester. Throughout the eighties, Richard Fairbrass worked as a session bassist for the likes of Mick Jagger, Boy George and David Bowie (he can be seen performing in the Jazzin’ For Blue Jean video), while Fred Fairbrass appeared as a guitarist in Bob Dylan’s 1987 film Hearts Of Fire. When Right Said Fred was formed, the two were accompanied by a rhythm section of bassist Dan Kruse and drummer Ray Weston, but both left – Weston to join Wishbone Ash – and in their place the brothers brought in guitarist Rob Manzoli.

The Fairbrass brothers had spent at least some of the eighties in New York and were taken by the hedonistic glamour they witnessed; a stark contrast to European greyness. Perhaps they also absorbed some of the more mischievous colours of eighties New Pop. They had day jobs, including working in a gym, where they noticed rather exhibitionist behaviour by some of the gym’s users. Wishing to satirise (and possibly, in a roundabout way, celebrate) what they saw, they came up with “I’m Too Sexy.”

It was the most pronounced New Pop song to become a major hit since Trio’s “Da Da Da,” and Richard Fairbrass’ stentorian yet deadpan baritone outlined the stylistic similarity between the two. The intention behind “I’m Too Sexy” was to undertake a Year Zero reconstruction of pop music; no influences, no paying of dues – although Manzoli couldn’t help but throw in the guitar riff from Hendrix’s “Third Stone From The Sun” (still, what an unexpected context in which to find the latter!). The song plays with itself, addresses its own nature and simply stops when it has outlived its usefulness (or sexiness).

Nonetheless, the song illustrates the fact that thinking about Right Said Fred always brings to my mind such words as elegance, grace and good humour. The fact that at the peak of their success the trio were all more or less pushing forty goes some way towards explaining this, since in their trio of big hits I am put in mind of a cabaret revue act, conspiring in winks with its reciprocal audience but never indulging in patronisation or sarcasm. I could propose a parallel with Kiki and Herb, but suffice it to say that they could serve as Rufus Wainwright’s conscientious uncles.

I cannot think of any other act who wouldn’t have dragged the sublimity of “I’m Too Sexy” down to crass tack, and the stubbornly long run of “Everything I Do (I Do It For You)” certainly cheated them out of having one of the great number ones (in Britain, if not in the United States); at no time are you not aware that the song’s protagonist is fully aware of the vainness of his vanity, and moreover Richard Fairbrass tends to chuckle along with him (“shake my little touche”) rather than at him.

Likewise, the follow-up, “Don’t Talk, Just Kiss,” top three over Christmas 1991 – how Freddie would have relished “Bohemian Rhapsody” being propped up by that and “Justified And Ancient” - was superior House-NRG and certainly the most fun Jocelyn Brown has ever had in a studio (“Ooh yeah, there’s people, there’s love/You and I both apply to the above”). If Bryan Ferry had ever recorded a hi-NRG album, he might have sounded something like this.

Then came “Deeply Dippy,” not a hit in America but a number one here, bearing such a wonderful air of goofy suavity about its unhurried, amiable carnality. Richard Fairbrass pitches his vocal at a confidential tone, as though sharing a gigglingly sexy secret with his Other (i.e. the listener), and the record’s stumbling, sunny gait puts me very much in mind, not only of “Daydream” by the Lovin’ Spoonful (the band soon acknowledged the influence and covered the song) but also of Donovan’s loosely-knit, semi-improvised string of sixties pop hits (“Deeply dippy, I’m your Superman” indeed), and you can tell that the group are hugely Richard themselves performing it. Rob Manzali’s lead guitar is especially inventive; whenever Fairbrass declares “Let’s set sail for seas of passion now,” Manzali lets his guitar drift into ambient, discursive ECM clouds before the band suddenly pull themselves together and introduce a fine and swinging brass section (Fairbrass’ “Alright” here sounding very much like Jarvis Cocker’s “Alright” on “Sorted For Es And Whizz”); the song then waxes and wanes as, well, lovers do (“Contact sport? Let the neighbours talk!” pronounces Fairbrass in an impeccable Home Counties brogue) and the words flow easily with the gently teasing currents of the music (“Sierra smile/Legs that go on for miles and miles”). Finally the group call it a day and Fairbrass murmurs a post-coital “I’m takin’ a hike to Tahiti” – presumably to sail even deeper and elongated seas of passion. One of the most immediately likeable, and in the long term also one of the most endearing, number ones of its era (and, in its own winking way, one of the most quietly avant-garde number ones; can you imagine anything like this topping the charts now?).

On the back of that success came the band’s first album, Up, which received great critical and commercial acclaim – they even succeeded in crossing over to the NME/indie audience, so much so that Heavenly Records issued a tribute E.P. to the band featuring cover versions of their hits by Saint Etienne, Flowered Up and the Rockingbirds; “I’m too Shakin’ for my Stevens” indeed! In the context of lushly orchestrated and expensively produced albums, it is rather refreshing to encounter Up’s unpretentious, relatively lo-fi and essentially good-humoured approach; the album was principally recorded at the Red Bus Recording Studios in Marylebone and produced pretty straightforwardly by one Tommy D (a.k.a. Tommy Danvers) from Putney, who was involved in the London club scene of the late eighties and early nineties and whom the band met while he was DJing.

If the rest of Up did not offer any further major hits – the closing “Those Simple Things” is a gentle, semi-acoustic ramble which they could have played in the seventies but was only a minor hit when released as a fourth single – it does provide plenty of imagination and a few unexpected curveballs; for instance, the stern call to House arms “Do Ya Feel” segues unexpectedly into a rock sequence which in turn leads to “Is It True About Love?” which latter patiently launches into a series of increasingly abstract philosophical queries – is it true about God, or shoes, or dreams, or cars, or pop, or trash, and what exactly is this “it”? “The misconception that ignorance is bliss”? This is not a conundrum one would expect to encounter from, say, Big Fun, or Sonia. If anything, it’s disco Roger Waters (although “the pros and cons of truth” clearly outweigh The Pros And Cons Of Hitch-Hiking).

“Swan” bears a very Saint Etienne-esque stillness in its heart amidst a landscape of brutalist distractions (“Dumbbells crash, babies cry…/The Underground, Marble Arch”) with its quietly insistent refrain of “I love only once.” Images such as “the great unlaid making their way home” and the way in which they are delivered seems to anticipate what Cocker would be doing on Different Class three-and-a-half years hence. Fairbrass’ final, pained, high-register cry of “I love only once” tells us that he is perhaps suffering more than anyone or anything else.

And then there is the potentially very disturbing “Upon My Heart” with its imaging worthy of Nick Cave. Perhaps its protagonist just sees the girl and wonders in premature grief about the hoops through which humans are obliged to jump in order to find love. Or perhaps he has done something dreadful and unmentionable (“She was so fresh in that dress/A small voice said resist/But the devil was in my heart”). The song resolves into an extended “Hey Jude”-style singalong fadeout, over which Fairbrass erupts; yelling, screaming “I’ll rescue you, rescue you!” Once “Those Simple Things” is done and you think the album is over, that refrain fades back in for a lap of (dis)honour. There was much more to Right Said Fred than amiable novelty – I imagine that Myles Rudge, a cultured fellow, was fully familiar with The Mixer when he wrote the lyrics to that Bernard Cribbins song – and it is a shame that the fastness of fashion denied any visible development (1993’s Sex And Travel delved even deeper, but few were by that time still listening). Still, “I’m Too Sexy” has endured – Jay-Z’s landmark 2001 album The Blueprint opens with “The Ruler’s Back,” in which the rapper proclaims that “I’m too sexy for jail like I’m Right Said Fred,” while Taylor Swift made sure the band received co-composer credits for “Look What You Made Me Do.” And the involvement, in the original version, of Ian Craig Marsh, formerly of Heaven 17 and the British Electric Foundation, underlines that Up is New Pop and agreeably proud of it.