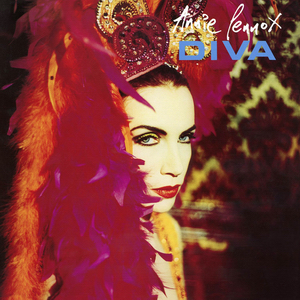 Many were watching Annie Lennox to see her fail, but many more – principally women, solvent but bearing assumptions of feeling – identified with her in greater depth. The Lennox of Diva represented the model of a strong, self-reliant woman, approaching middle age and abandoned and rewarded in unequal measures, emerging through the murk, bruised yet triumphant, with whose emotions and her expression of same her audience felt they could empathise.

Many were waiting to see what Annie Lennox was capable of doing without Dave Stewart. The fact that she wrote eight of Diva’s eleven songs fully on her own, and co-wrote a further two, indicated pretty strongly that her spirit was independent and resourceful.

Personally, I wish much more of that spirit had been clearly evident throughout Diva. One sees what Lennox was attempting to achieve here, and in great part that was a battle against The Industry, who wanted her brave and free but also to get played on FM radio and seen on MTV. Hence “Little Bird,” where she sings about being trapped in a world she neither made or wanted and her desire just to fly away and escape from all of it, is conveniently the song here which sounds closest to Eurythmics.

The opening two songs, which were also the album’s two biggest hits, were at the time interpreted as extended, metaphorical soliloquies about the singer’s professional and emotional break from Stewart. “Why” is a nearly remarkable piece of work which Lennox begins by apologising for saying anything before it gradually dawns upon her that this is a façade, and she then proceeds to rant against the ballad’s boundaries, moving to a faster implied tempo to list every joy in her life which she has not experienced and is never likely to experience, grimly concluding – to Stewart, to her listeners? – that “you don’t know how I feel.” Likewise, the surface jollity of “Walking On Broken Glass” conceals a howl of betrayed rage which is almost worthy of PJ Harvey.

Yet PJ Harvey’s Dry had emerged a week earlier than Diva and threw that record into rather embarrassed relief. Polly’s music throbs (“Oh My Lover”), breathes (“Dress”), names names (“O Stella”), does not compromise (“Sheela-Na-Gig”) and dives into waters of hyperreality beyond the reach or means of corporate politesse (“Water”). It felt like a glorious and aptly raging rebuttal of most things which Annie Lennox™ appeared to represent.

Set against events like “Joe” or “Happy And Bleeding”(“Fruit flower myself inside out” indeed), Diva is just too damned well-behaved. Lennox had just given birth to her eldest daughter, Lola (who now bestrides the Radio 2 playlist and, unsurprisingly, sounds exactly like her mother), hence “Precious” and the CD-only appendix of her rather unsettling flapper interpretation of Al Dubin and Harry Warren’s 1933 song “Keep Young And Beautiful.” “Precious” exemplifies the album’s central problem; it begins promisingly, out of tempo, but soon gets back on the tried and trusted middle of the Simply Red road. Lennox delivers heartfelt but shopworn homilies, the bass (possibly Doug Wimbish; the personnel details are irritatingly imprecise) arches in bridging sighs, and a moody trumpet (the excellent Dave de Fries) provides the album’s only instrumental solo.

Diva was produced and overseen by Stephen Lipson, Trevor Horn’s former number two at ZTT, and, as that label’s product was apt to become, is rather overlit and oppressively professional. This is a particular problem when Lennox simply tries too hard – the self-parodic autobiography of “Legend In My Living Room,” complete with stereo-panning at its centre, or the prosaic “Money Can’t Buy It,” in which latter’s rap section the singer comes dangerously close to expressing “First World problems.”

Where the album works is when Lennox holds back and lets the music and her feelings wash over any expectations of commercial crossover. “Cold” is a very fine and evocative ambient miniature of encroaching winter (there are many references throughout Diva to coldness, darkness, snow, ice, etc. – yet this album appeared in the spring!). “Primitive” gets very close to the transcendence which I suspect Lennox was seeking all along; if it sounds a little akin to the Japan of “Taking Islands In Africa,” that is because Steve Jansen contributes drum programming, and the antiphonal Middle Eastern string lines indicate the influence of sometime Massive Attack associate Marius de Vries, who is also one of Diva’s chief contributors (as is keyboardist Peter-John Vettese, seconded from the eighties line-up of Jethro Tull – his recorder lines on “Stay By Me” indicate how far back Lennox’s roots really stretch), and looks forward to what occurs during entry #690).

But it is with “The Gift,” co-authored with fellow Scots the Blue Nile, that Diva breaks its opulent bounds and exceeds itself. The keyboards and subdued (to the point of being subaquatic) rhythm programming here are essentially ahuman – one notes the “Be My Baby” pulse, buried deep but still present – as Lennox sings of a collapsing relationship and the need to flee into the metaphorical rain (a favourite Blue Nile trope). Despite her habitual over-singing – another barrier to my appreciating Lennox’s art; there is generally excessive studium in her voice’s grain, as though she would like to fly, but can’t forget how Maggie Bell might have tackled a line – she does achieve a variety of transcendence here. But contrast the showgirl frenzy of Diva’s cover – she sports a headdress which previously saw action in the 1983 James Bond movie Octopussy – with the soberly contented monochrome photograph which illustrates the inner sleeve (look, she is happy!), and you can grasp the conflicting emotions and expectations at work in the album itself.

Posted by Marcello Carlin at 09:59