INXS: Welcome To Wherever You Are 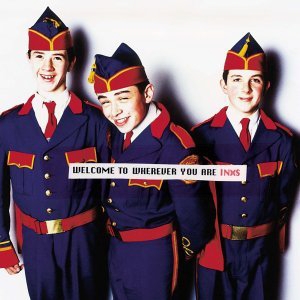 Charts do not remotely tell the real story of things. Kick spent just under two years on our album chart, contains most of the INXS songs you have heard of, and sold 900,000 copies in Britain but never climbed higher than number nine, whereas their only week at number one was with their most experimental and determinedly least approachable album. Moreover, Welcome To Wherever You Are did far less commercial business than had been expected in the States and, most importantly, in the band’s native Australia (even though it was the first album by an Australian band – note the word “band,” Kylie and Jason fans - to top our charts in over a decade). There were reasons for that, including the band’s decision not to tour the album – their intention had been to get straight back into the studio, record their next album (which turned out to be Full Moon, Dirty Hearts), and then tour to promote both. In addition, Welcome To Wherever You Are did not look like an INXS album; its cover stars were members of the Dublin-based youth marching band, The Artane Band, and the album’s credits tell us that former members of the latter included Larry Mullen Jr – hence the military percussive tattoos which underline many of U2’s songs. Where, the public wondered, were INXS in all of this?

If anything, Welcome To Wherever You Are follows fairly directly from the precedent set by Achtung Baby; the urge to break out of the formula and cautiously experiment. The record’s central problem lies in that adverb “cautiously”; “Heaven Sent” and “Back On Line” are routine rockers decorated with vaguely trendy addenda. Yet INXS were also keen on pursuing the back-to-basics dirt track, recalling Mark Opitz, with whom the band had not worked since 1982’s Shabooh Shoobah, as producer.

My feeling is that Welcome To Wherever You Are is a record unluckily just out of its time. It begins promisingly enough with the Eastern drone aura of “Questions” – which, if anything, uncannily presages some of the work of mid-to-late stage Oasis – and sonically is never less than powerful (they retained Bob Clearmountain for the big mix). “Taste It” is appropriately dynamic, but the record is underpinned by a lot of 1990 tropes – touches of baggy, House and industrial, like so much opulent mascara. Sometimes that approach works in its favour; “Not Enough Time,” sung with Deni Hines, is quite spellbinding in a Screamadelica-outtake kind of way.

However, as was the case with Achtung Baby, the songs which work best are the most direct and straightforward ones. Both “Baby Don’t Cry” and “Beautiful Girl” were composed by Andrew Farriss with his then newly-born daughter Grace in mind, and both are splendid; indeed, an uncredited but clearly audible Bono guests on “Beautiful Girl.” Meanwhile, “Baby Don’t Cry,” which involved sixty members of the Australian Concert Orchestra, is a blistering piece of 1968-meeting-1978 orchestral maximalism – Cupid’s Inspiration meets The Babys – complete with breakbeats and Michael Hutchence heroically indulging in some rapping – which should have been a far bigger hit single than it actually was; it is possible that many fans found it slightly intimidating and overcooked.

And yet, as is inevitable with INXS, it is Hutchence to whom we finally return our focus; the closing “Men And Women” is the only song on the record to be written entirely by the singer, also involves the Australian Concert Orchestra and is intentionally disconcerting in its meticulous melodrama and final dissolution into near-noise. Here, Hutchence manages to approach the aesthetic and emotional tenor of his friend, Nick Cave, and if you think that a curious connection, consider how Cave’s album Henry’s Dream, released just four months prior to Welcome To Wherever You Are, ends with the dogged jackhammer sludge-rock of “Jack The Ripper,” and mentally picture how well Hutchence could have interpreted it (“I got a wo-MAAN!/She strikes me down with a fist of LEAD!!”).

I wonder whether it might not have been better for INXS to hold back on Welcome and release both it and Full Moon simultaneously; the latter peaked at number three here, hence will not directly bother this tale, and while it is generally and disappointingly rather conventional in its approach (probably because they began working as a band again – for various personal reasons, Welcome basically came down to Hutchence, Andrew Farriss and Opitz putting it all together), it does begin with the single greatest thing that the band ever did, “The Gift” (with its spectacular video), which not only does postmodern U2 better than U2, but also unleashes much of the pent-up tension which slowly accumulates throughout Welcome. I can perfectly imagine Cave performing it. There was then a long break, and Hutchence’s complicated and messy personal life need not be revisited here; suffice to say that 1997’s Elegantly Wasted was no In Utero, not that it was intended to be. Nonetheless, I am a little disappointed that entry #458 is not entry #457…