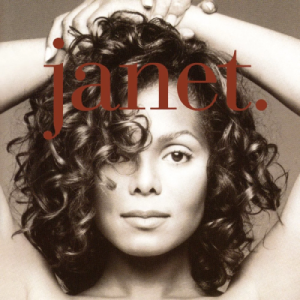 (Author’s Note: All tracks italicised above are “interludes” rather than songs in themselves and with two exceptions last only a few seconds apiece. “whoops now” appears as an unlisted “hidden” track at the end of the album, but its inclusion is, in my view and almost certainly not my view alone, crucial.)

It already looks ahead of its time, does it not? And that isn’t simply because both Janet and her new record label wanted to be free of the “Jackson” Damoclean sword, or because Virgin reckoned she could be the next megastar to become commonly known by one name only. The decision appears to have been mutual, and by crediting an album by “Janet Jackson,” as I have done above, purely to get you to read this piece, I have already compromised it, and her art.

Nevertheless janet. was ahead of the curve in so many ways, and not simply because of the Aaliyahs, Christinas, Britneys, Arianas, Beyoncés, P!nks and Taylors it (and she) would directly inspire. The lower case track titles are as printed on the sleeve of the album, and I think that it was deliberate, as so many track listings are today; not a nod to e.e. cummings or generalised tweeness, but a quiet assertion in itself, a stealthy, if benign, move away from Definitive Moments in Pop’s Perilous Tapestry towards a more fluid uncertainty or ambiguity (more in empathy with Carole King’s Tapestry, perhaps?) – or, in short, away from the intemperate definitiveness of malehood and towards the softer yet wider expansions proposed by the  feminisation of pop.

After the declaration of personal and artistic independence which had been Control, and the social rallying of Rhythm Nation 1814, Janet had decided to focus on moments of love on her next album, to take stock of her life and what she knew and perceived as being relationships with another. As with janet.’s two predecessors, she was not really alone – Jimmy Jam and Terry Lewis were helping to shape her world and art.

The album takes the structure of a day in Janet’s life – it begins in the morning and ends late at night. The structure of songs with linking interludes was not new to R&B or hip-hop but here gives rise to a very mature sense of conceptualism which, I suggest, would have long since been acknowledged as pioneering had the artist not been a woman (look at these three albums; they bear a degree of innovation equalled in their time only by Prince. Madonna’s quaint notions of erotica do not enter the equation).

Astutely, janet. does not commence with a loud bang but subtly insinuates its way into your ear canal. “that’s the way love goes” is remarkable precisely because of how much and how well it holds back – its canter is patient, its aim one of pure petals of steel.

From there, the album simply builds. “you want this” is a Cubist reassembling of pop tropes which foreshadows what Timbaland and the Neptunes would be conjuring only a few years hence. “if” is extremist industrial avant-pop, all the more radical for planting itself at the centre of the marketplace rather than the dusty corners of a slightly out-of-town independent record shop. Tonality and indeed rationalism are merrily chucked out of the window of the marooned transport café at the end of Sapphire And Steel, straight into space. Both songs reconfigure elements of (mis?)remembered Supremes songs.

“this time” is scarily epic, and hugely worthy of awe. It is one of the greatest fuck-YOU “anthems” of pop with its unstoppable, upward march – and its use of slightly displaced second and fourth beats per bar anticipates the subsequent work of Calvin Harris – until the dramatic entry of Kathleen Battle’s soprano, and a string line fulsome enough to merit incorporation into The Lexicon Of Love (“You’re dismissed!,” a triumphant Janet hisses at the end).

There’s no stopping janet.; it (she!) can do Rave ’92 without blanching (“throb”) and even power pop (“what’ll i do,” essentially a cover of an obscure 1967 Stax song, “What’ll I Do For Satisfaction,” originally sung by one Johnny Daye). “funky big band” might be a missing link between August Darnell and the Christina Aguilera of Back To Basics.

Then, despite the album’s general focus on love and other matters personal, we get “new agenda,” Janet’s angriest and most political song, wherein she roars against the eye-gouging patriarchy, the humanity-robbing racists, and in which Chuck D himself turns up to confirm his absolute concurrence (“but the klan ain't playin’ at the range”). How bloody important was, and is, this piece of music (don’t fucking tell me that nobody writes protest songs any more) – not simply to the Kendricks, d’Angelos and Rihannas of a forthcoming world, but also to a generation of young women who heard “new agenda,” flipped to it and were henceforth unafraid and unashamed to declare their hand (“with every no/i grow in strength/that is why – AFRICAN-AMERICAN WOMAN! – i stand tall with pride”).

Following that climax, Janet, Jam and Lewis then steadily take the pace down, via the relatively straightforward “because of love” towards a slow-jam climax of unholy transcendence. “again” was premiered in the 1993 John Singleton movie Poetic Justice (which would subsequently inspire Kendrick Lamar’s similarly-named song) in which Janet starred – it was a tough and slightly arduous film to make, and Janet was keen to return to a lighter touch in her music thereafter.

As a ballad, though, “again” is both showcase and setpiece; brilliantly choreographed, with a vocal performance so palpably, yet quietly, intense that it could be said to have outdone Michael. The sequence of apparent softness progresses; “where are you now” is an exercise in Tropicalia which plays subtle games with tonality and bar lines; it lies somewhere between the Tom Jobim of matita pere and the Arto Lindsay of The Subtle Body. “the body that loves you” continues the procession towards the delicious border of sumptuous non-existence, and that is reached in the deliriously endless “any time, any place” – a grown-up “Let’s Wait Awhile,” where the singer knows what she (and, secondarily, the mythical “he”) wants; the Gaye of Let’s Get It On could not have sung this song without an aura of perilous guilt. But Janet is calm, patient and visionary, steering the song’s cloisters towards the stellar cluster of an eternity. Note (because you’ll otherwise miss it) the simple double entendre of “are you still up” and a re-embodied (never “disembodied”) coda which ranks in holiness alongside the second side of Barry White’s Stone Gon’ (which latter Paul Lester, and not just Paul Lester, has compared with imperial-phase Cocteau Twins). Sweet dreams indeed, to Janet, to Jam and Lewis, to pop, and to everything that 1993 and Oxford promised.

But that isn’t quite all of the story. As I said at the top of this piece, “whoops now” only makes itself known if you let the CD run on for a bit after it has apparently ended, and with gleeful loudness goes against most of what has preceded it. A bouncing slice of bubblegum, with a feeling similar to that of Diana Ross’ “Chain Reaction,” “whoops now” demonstrates that love and sex are only part of Janet’s universe, suggests that she doesn’t take either that seriously, strongly implies that she’s just as happy – and maybe happier – hanging out with her friends (there is a meaningful reference to a would-be lover who has let her down in the song’s final verse), talking about eating lobsters, or playing tiddlywinks. “Tiddlywinks?” exclaims one of her friends. “I thought you were talking about – you-know-what!” “What?” “You know…” “I like that part too!” “Oops!” Just as Tubular Bells inevitably (with hindsight) leads up to “The Sailor’s Hornpipe,” so does janet., in its glorious airing of liberation, remind us that the deepest and most fulfilled of lives don’t necessarily have to be the most unrelentingly serious.

Posted by Marcello Carlin at 11:53