Tina TURNER: What’s Love Got To Do With It 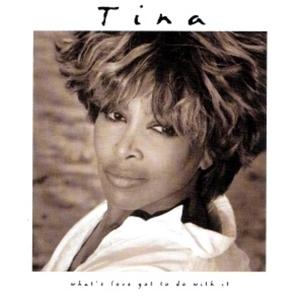 The cover simply credits “Tina” – with no surname. Did she need one, by 1993? Probably not, but the absence of any “Turner” is significant. The movie was “adapted” from the singer’s 1986 autobiography (written with Kurt Loder) I, Tina, and since the film rights to the book were bought by Disney, the resulting, misleading gloss was perhaps to be expected.

The film plays frisbee with the details and chronology of Tina’s life and her relationship with Ike. Tina herself complained about both the extensive toning-down of the brutality described in her book and about historical inaccuracies, including invented characters. She did not relish being portrayed as a victim. Moreover, as she makes clear in her liner note to the soundtrack album, she was unhappy about being asked to re-record the old songs, songs she had not sung, or had wished to sing, in decades.

One presumes that Disney’s thinking centred upon the notional solvent international moviegoer, interested only in the Tina Turner “brand” and wanting as good and simply binary a story as possible. One might also presume that including the original recordings would legally involve talking to Ike Turner – and the film-makers did their best to minimise Ike’s involvement (which mainly comprised his showing Laurence Fishburne the “Ike Turner walk”).

Hence one might consider the idea of Tina re-recording the old songs to be an exercise in controlled, benign sadism (as opposed to the demonic sadism of her former husband). The film does not satisfactorily clarify matters. Angela Bassett’s performance as Tina (the studio’s initial choice, Whitney Houston, declined the role as she was pregnant with Bobbi) is faultless – and that itself is the problem, since the character is sketched as someone incapable of imperfection.

The overwhelmingly compelling performance in the film is Fishburne’s Ike, who works very meticulously to outline how thin the dividing line between charm and brutality can be. We see him as a man driven to conquer, to create, to triumph, to cajole and persuade, and also how easily these urges can be detoured or converted into self-destruction – perhaps the key lines on this album are the two utterances of “I had to self-destruct” in “Disco Inferno,” a song Tina performed many times in the late seventies (but had never previously recorded) after she had broken from Ike and had to play strip clubs and similar to make the semblance of a living. And yet, there is the feeling that there isn’t enough Ike in this story, and, worse, the notion that, as Alfred Molina managed with Kenneth Halliwell in Prick Up Your Ears, you end up feeling sorrier for the villain than the hero, or heroine.

Inarguably, the film is marred by the intrusive appearance of Tina herself at its end, in concert footage which is divorced from the rest of the film and looks like a dry run for a Pepsi commercial. It doesn’t have the courage to allow Bassett to run with the protagonist and her story and make it finally matter.

What the soundtrack album did, however, was to offer Tina the opportunity to stare these old songs right in their faces, to address them anew – and I’m not really sure that we have had an album like this on Then Play Long before. The selection and sequencing of songs are intriguing, laid out to give the impression of a story being related backwards, beginning with the famous, reborn and emotionally exhausted Tina insisting that she doesn’t want to go back into the past (“time for letting go”) and that she has no fight left in her – why should she have; hasn’t she won that specific war? – and concluding with her declaration of principles (“Make me over…make me smart, make me king”), although the Ike and Tina joint songwriting credit for the latter is a slight red herring; in the film, “Tina’s Wish” is shown as the first recording that she makes, in 1957, but the song was actually an adaptation of a 1973 piece entitled “Make Me Over.”

It is, admittedly, quite an engaging process at work on the album, that of Tina breaking down, analysing, reshaping and reconstructing her own history as well as that of pop; she views B.B. King, Bryan Adams, the Trammps and Lulu as elements of the same aesthetic tapestry – and why shouldn’t she (and isn’t this the most honest of ways in which to view popular music; think also of R Wayne’s medley in Peter Kay’s Britain’s Got The Pop Factor, where “Return To Innocence,” “I Love Music,” “Earth Song,” “Y.M.C.A.” and “There’s No One Quite Like Grandma” are rightly viewed as equally-sized components of a unified framework)?

With the old songs, her band are far too timid, and perhaps still think it is 1986, but there is absolutely nothing wrong with her vocals – she attacks “A Fool In Love” (Ike and Tina’s first hit), “Shake A Tail Feather” (featuring some stirring call-and-response work with her backing singers, one of whom, Sharon Brown, hit in 1982 with “I Specialise In Love”) and “It’s Gonna Work Out Fine” with beyond-commendable gusto. Her B.B. King interpretations (to a point – “(Darlin’) You Know I Love You” was the singer’s own modification of a King tune, although King still got the composer credit) are pretty sensational, and guitarist James Ralston does a reasonable Lucille facsimile. The bass-baritone voice which serves as an Ike substitute on “Proud Mary” and “It’s Gonna Work Out Fine” is credited on the album sleeve to Tina’s keyboard player/saxophonist Timmy Cappello, but sounds mightily like Fishburne.

Of the new songs, “I Don’t Wanna Fight” (originally offered to Sade Adu, who didn’t feel that the song quite fitted her and passed it on to Tina) is an elegant portrayal of drawn-out battle weariness, co-written by Lulu (with Steve DuBerry and, uncredited, her brother Billy Lawrie); the music is BMW-compatible politesse, but Tina’s vocal performance is extraordinary, writhing, tearing its complacent setting apart. The agony eventually settles into ambient waves of Fairlight and one scarcely notices that the song runs for over six minutes. “Why Must We Wait Until Tonight,” written and produced by Adams and Mutt Lange, is about two degrees of separation from the early Style Council with its squelching, post-“Juicy Fruit” synth bass and drum machine, but again Tina pulls the song into a more sensuous dimension – she is desperate to fuck, and love doesn’t appear to have much to do with it (the urge). “Stay Awhile” is more evenly-keeled, in the manner of mid-period Dire Straits, but as that song fades out, its singer is already picking at its bones, improvising on its premise, ready to burst through its protective carapace.

There really isn’t much she can do with a straight re-creation of “Nutbush City Limits” – particularly since the original’s characteristic Moog solo was played by Ike himself (and there is also, and obviously, no Marc Bolan, who is likely to have been one of the guitarists on that 1973 recording). She does not even think about re-attempting “River Deep, Mountain High” (the original master was used in the film, and since Spector was extremely unhappy with the latter, it is unlikely that he would have wanted to lease it out for use here – that first example of Tina making it without any Ike). However, two songs from Private Dancer reappear in their original 1984 form – “What’s Love Got To Do With It” itself, and the tortured, Rupert Hine-helmed but palpably autobiographical “I Might Have Been Queen” in which her screams of a denied future remain profoundly disturbing.

What, then, does the What’s Love Got To Do With It soundtrack tell us about Tina Turner? I’d argue that it tells us a hell of a lot more about the woman than the placidly-programmed brand marketing exercises – look at me! I’m free! I can scale the Eiffel Tower from the outside if I so wish! - which were more typical of her output then. As a direct stare in the face of the artist’s past it is not really precedented in this run of number one albums. Yet, even heavily diluted, these songs and the way they are approached and handled allow us a view of this then fifty-four-year-old woman who had pushed herself, or been pushed, through hell, yet seized her history and made it matter to herself more than it had ever mattered before. The life has led to this blessed and blissful mythology, one in which she sounds freer and more dynamic than she had ever done in 1961 or 1969 or 1977. There is still enough concealed to make you realise that, in the end, the myth of Tina remains one of pop’s most patiently enigmatic. Nevertheless, she ended up eating that cake all right.