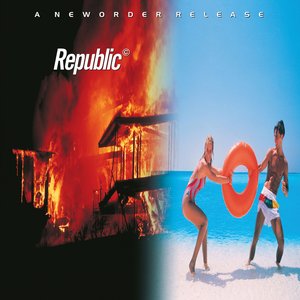 They are on Venice Beach, recording a Top Of The Pops appearance to promote their single “Regret.” There is some kind of tie-in with the American television series Baywatch, whose star David Hasselhoff introduces their performance. Various bikini-clad extras decorate the scenario. But the band themselves do not look particularly happy.

When last we visited New Order it was four years before. Something to be known as “Madchester” was due to break big before that year’s end. The Stone Roses and 808 State were busy making themselves known and Happy Mondays had already become known. Indie and House were happily chatting with each other. Everything appeared hopeful, exciting and colourful.

But now it is the spring of 1993. Madchester has long evaporated. The Stone Roses are under long-term legal lockdown because of a contractual dispute. The Mondays disintegrated the year before. 808 State are still out there, as are the Inspiral Carpets (if, by this stage, only just). New Order have glumly regrouped for a new album after years of doing their own things – Electronica, Revenge and The Other Two.

“Regret” was hopeful, I’ll give it that, but even though it was still spring, the record and song sounded autumnal. It was one of their best and simplest pop songs, with a guitar hook which isn’t really “Talk Of The Town” but close enough to remind some people of a past. I would deploy the adjective “elegiac,” but everybody uses it with regard to New Order at some point or other. But the song did sound as though the band were closing down.

They had split from Factory Records, with some rancour, and much of Republic can be interpreted as commentary on the break – “Ruined In A Day,” “Liar,” “Times Change” and, especially, “Special” make fairly direct references to it.

The trouble is that on Republic the band mostly sound split from themselves. This is largely down to the record’s producer Stephen Hague, who seemed intent on turning them into another Pet Shop Boys (or closer to Electronic) – this is not the only 1993 number one album to include a song entitled “Young Offender” (though New Order’s is one of the freshest and lightest things on here – it sounds directed at the collapsed Mondays). Peter Hook is effectively sidelined, or buried too far back in the mix, throughout the album; when we do hear him, it is in the manner of a distant Dire Straits-ish guitar line – and, as we know from the sorely overrated Music Complete, New Order without Hooky is not New Order. On “World,” one struggles to detect any band breaking through the bland wall of rote backing vocals and session drum programming (although stylistically some of the album does point fairly directly to affairs such as entry #1192).

And yet Republic is unsettling in its melancholy. When there is a genuine rapprochement with then-contemporary dance music – “Spooky,” “Chemical” – the results are quite engaging, but “Ruined In A Day” sounds sufficiently downbeat to rekindle memories of this band’s previous incarnation. The song “Special” is quietly bitter, and by the time of the closing instrumental, “Avalanche,” we are effectively back in the world of Joy Division.

But the record is worth keeping for “Everyone Everywhere,” which is one of the very greatest things New Order ever created, a song so grand and sad I wish the Pet Shop Boys had covered it. Here they are not attempting to be Depeche Mode or the Future Sound Of London; they are their own essence, with that huge embrace of tears which was fully present in the absence of Closer a lifetime previously, and galleons of guitars ascending, burning and falling, bearing echoes and hues of golden hues, the fugitive light catching the cloisters, the encyclopaedic conclusion to a life’s experience.

The song ends. But even before it has ended, the band have vanished. With a single breath, their world had gone. Their instruments stand on the beach, motionless, unplayed. To mark where they once had been. Where had they been?

Posted by Marcello Carlin at 09:46