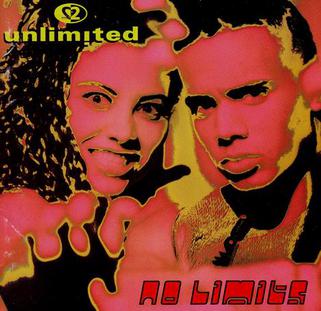 The kids of 1993 didn’t necessarily wanna rock. Like it or not, would-be influencers, they wanted to dance, as they always have done; moreover, Europhobes, they were perfectly content to extract their dancing from the Continent. 2 Unlimited – two Belgian producers and two Dutch vocalists – were EU pop at its basest and most thrilling. Wave your plastic Union Jacks as smugly as you might like, but wryly woven lyrical curlicues meant nothing set next to the unanswerable battle cry/manifesto of: “TECHNO TECHNO TECHNO TECHNO!“

That latter was a planned accident. When the second 2 Unlimited album was delivered, their British record label – PWL Continental (i.e. Pete Waterman) – didn’t think much at all of Ray Slijngaard’s rapping and preferred to cut up his words and redeploy them semi-randomly. Hence the “original” version of “No Limit,” as played by Fearne Cotton on Radio 2 a couple of Fridays ago, is curiously hollowed-out – “TECHNO TECHNO TECHNO TECHNO” only appears in the UK mix, which remains one of pop’s most glorious jewels, easily up there with “Awopbopaloobop” and suchlike.

That model was applied to much of the rest of 2 Unlimited’s second album; their first, Get Ready, was largely instrumental and, despite hosting several major hit singles, didn’t do too well commercially. On No Limits, Slijngaard and singer (and former traffic warden) Anita Dels contributed almost as equally to the writing of the songs as the band’s “musicians” (Phil Wilde and Jean-Paul de Coster) had done.

Characteristically the snobs had a good chuckle at the time. The reviewer for Smash Hits, a magazine run by old hippies pretending to be Down With The Kids, described the album as an “across-the-board techno splurge” – that’s supposed to be a bad thing? – and suggested that it outlined why the group were not popular in “elite dance circles” (they sound more and more attractive, don’t they?). Moreover, they were deemed “not hard or imaginative and they have no credibility in dance circles.” How dare they not be manly!

Happily, The Kids tossed this seventies macho crap into the ill-lit skip that it deserved, along with all those Sven Vath, Bandulu and Seefeel records which they were “supposed to like.” Noted music commentator Toby Anstis thought that No Limits “sounded all the same,” but, as usual with people who don’t listen, this is nothing like the case.

No Limits is a bloody great dance album, and a lot of its inadvertent genius is down to the re-placing of Slijngaard in the mix, reducing his commentary to abstract gestures and slogans, photographs of messages – out of nothing, amidst the jollity of “Kiss Me Bliss Me,” appears The Word: “PUT ON YOUR DANCING SHOES!”

“Tribal Dance” and “Maximum Overdrive” are both top-notch “What Time Is Love?” rip-offs, but the latter is much rougher and more elemental than the former. “Faces” cuts up spoken instructions and uncertain tonal relations as disquietingly as the Cabaret Voltaire of Voice Of America. “The Power Age” is a fabulous derivé of the Inner City/Detroit techno template, which inevitably reminds me of Kevin Saunderson’s central role in one of 1993’s other great extremist dance-pop album, Altern-8’s Full-On Mask Hysteria, as Staffordshire rock ‘n’ roll as the Stained Class of Judas Priest.

It goes on. “Throw The Groove Down” relies on a chintzy organ riff which takes us back to the days of Dave “Baby” Cortez. “R.U.O.K.” is lovers’ rock psychology worthy of inclusion on One Dove’s Morning Come White (also from 1993; sometimes The Critics do get it right). “Let The Beat Controls Your Body” turns on the axis of that least 1993 of musical tropes, the Picardy third.

The group take the temperature down for a relatively chilled-out final lap. “Invite Me To Techno” bears an easy elegance reminiscent of Saint Etienne. “Where Are You Now” and “Shelter On A Rainy Day” are both etiolated, Anita-led ballads on which Ray scarcely appears, and perhaps anticipate the Madonna of Bedtime Stories. How anybody could think that these sounded remotely like “No Limit” is baffling.

Ah, yes – “No Limit.” In its central section, Slijngaard contributes ten words in the space of fourteen seconds, eight of which are the same word. In the knowledge that the right or wrong fourteen seconds can often solidify the difference between a great record and a mediocre one, his has to be counted as one of the great cameo appearances in pop – one of the most minimalist, yet one of the most intense. And also one of the most gloriously stupid (precisely because it is sculpted with such intelligence).

Ray and Anita’s total “misunderstanding” of pop – thongs, piercings and boots all in the wrong places, solemn glares and punk gestures (that album cover!) which radiate hilarity – actually led to a deeper understanding of its magic.

“No Limit” was the most extreme and most successful of their run of happier-than-hardcore post-rave hits, but its opening clarion call – synths as guitars blowing raspberries – is as rousing a reveille in pop as Link Wray’s rumbles on “Rumble” or Meek flushing his toilet backwards at the beginning of “Telstar.”

Its few lyrics are standard striving hogwash (“No valley too deep, no mountain too high/No, no limits, won’t give up the fight/We do what we want and we do it with pride” etc.) which Anita sings in her enterprisingly straining voice (much of the group’s core work relies on the relationship of the quickfire beats to the slower, albeit sung at half-bpm speed, and more considered central melodies.

2 Unlimited could well have been a Jekyll to Atari Teenage Riot’s Hyde, except that, for a record which by my count says “no” 72 times, it is of course saying a definitive “yes” to now and tomorrow. But it is those fourteen seconds which make “No Limit” transcend itself. A speeded-up, sampled “no,” tweaked to sound like “ow,” is punctuated twice by Slijngaard, firstly with the war cry “TECHNO TECHNO TECHNO TECHNO!” and secondly by the augmented exhortation “COME ONNNNN TECHNO TECHNO TECHNO TECHNO!”

It was the deadliest of hooks, all the more effective by being used only twice and in the voice of a newly-arrived tourist haphazardly banging his head against the ceiling of Ministry Of Sound; and that triumph of instinct over knowingness signifies a crucial, if to some uncomfortable, truth about pop, namely that it is often more effective to have a performer with the ability to move rhythmically and dynamically through a record than one who presents with a thorough and comprehensive understanding of pop.

In other words, when faced with the wall built up by Phil Wilde and de Coster, Slijngaard – or, more precisely, Waterman - reacts intuitively by what he believes is the spirit of “TECHNO,” however misguided that belief may appear – and it is the wonderful wrongness of “TECHNO TECHNO TECHNO TECHNO” which lends “No Limit” its greatness; the mistake which accidentally leads to something new and may even exceed the “correct” answer – and that is the kind of approach which a million kids can grasp instantly and which twists pop into the sort of shapes and apparitions which are worth loving. By laughing and shrugging off received history, those fourteen seconds of “No Limit” themselves made history.

Posted by Marcello Carlin at 11:32