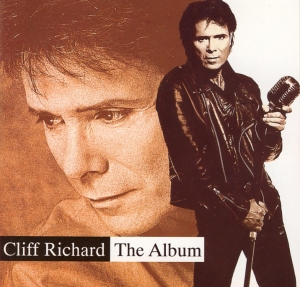 Cliff Richard’s seventh – and to date most recent – British number one album is unique in that it is the only one of those seven albums to be an actual Cliff Richard album in and of itself. He had to split the first one fifty-fifty with his backing group, and then there were two film soundtracks and three hits compilations. Hence the title The Album carries an extra significance in that context.

The singer was now fifty-two but still keen to be perceived as contemporary. Most of his albums have been passed over here and generally remain undersung; not just the better-known ones such as I’m Nearly Famous (1976), Every Face Tells A Story (1977) and Always Guaranteed (1987) but also nearly-forgotten but excellent albums such as the song cycle The 31st Of February Street (1974) and the American-recorded Something’s Goin’ On (2004).

Yet The Album might be the most unfairly-overlooked one of the lot. As far as early nineties adult contemporary pop albums are concerned, it is very good indeed. As a statement of the feelings and spirituality of a middle-aged man, it is something more.

One has to applaud Cliff for his brave choice of lead single – the knottiest and perhaps least commercial-sounding song on the record (which nonetheless became an unlikely but fitting next-door neighbour to “Jump They Say” in our top ten). Written by Andy Hill and Peter Sinfield for the One Moment In Time 1988 Summer Olympics album – the original was sung by Jennifer Holliday – “Peace In Our Time” became a major North American hit the following year when covered by Eddie Money. The song is characteristically (for Sinfield) cynical in places (“We're never gonna break down these walls/And build a prison with the stone”) but fundamentally determined and hopeful, and Cliff’s reading fulfils those requirements with quiet gusto.

Elsewhere there is very smart pop – “Love Is The Strongest Emotion” and “Human Work Of Art” both came from the same songwriting duo responsible for Charles and Eddie’s international 1992 hit “Would I Lie To You?” (Mick Leeson and Peter Vale) – with only the occasional dated misfire (“Little Mistreater”).

Yet the overriding concerns of The Album appear to be those of faith and belief. “Only Angel,” a premature bereavement lament, and “Handle My Heart With Love” – this record’s “Miracle Goodnight” – are not especially remarkable songs in themselves, but Cliff sings both as though his life depends on it.

When we consider the pleas expressed here – “You Move Heaven” (harmonically vaguely reminiscent of “Betcha By Golly, Wow”), “I Need Love,” “Hold Us Together” (a great track, where strings and lounge memories – echoed synthesised flutes, 1968 meets 1998 – combine in a manner anticipatory of Air’s Moon Safari), “Healing Love” (a mutually beneficial meeting between Cliff and Nik Kershaw) and especially “Never Let Go,” where Cliff sounds close to desperation – we have to ask ourselves whether he is actually singing to a lover, as such, or whether he is addressing his fans or, indeed, God.

Consider the closing song “Brother To Brother,” a requiem for someone who never actually was (Cliff has had three sisters, but no brothers). I don’t know whom or what it is supposed to be about – I wonder if he had his paternal grandfather, Frederick William Webb, in mind - but the singer sounds mournful, yet not bereft of hope (the song was co-written by Steve Glen and this album’s musical mastermind Paul Moessl, who joined Cliff in the mid-eighties as a keyboard player, became his musical director and co-produced/co-wrote [and played on] much of The Album; Moessl later moved into soundtrack work for films and television), even though he intones the song as though making his last, dignified stand in the world.

By far the best and most lasting song on here, however, is “I Still Believe In You.” Though composed by two Americans – David Pomeranz and Dean Pitchford – it is not to be confused with Vince Gill’s 1992 song of the same name. Perhaps it was intended as a response to Brian Wilson (“You Still Believe In Me”). However, it might be the single most extraordinary thing that Cliff has ever done (and indeed Richard Hewson, who arranged the majestic strings and percussion with Moessl), since with renewed pride and energy he dares to renounce the illusion of love, all the better to accept its reality. “But one by one, those fantasies have failed,” he sings, “while you keep shining through.”

It is as though, after half a lifetime of trying, he finally made that quantum leap and took the vital choice to live rather than exist. Of course, he could still be addressing his audience (as they felt he was when they returned the song to our singles chart in 2014 as an expression of returned, renewed faith to its singer in the midst of terrible circumstances). There are less happy endings in pop, and fewer happier ones.

Posted by Marcello Carlin at 10:40