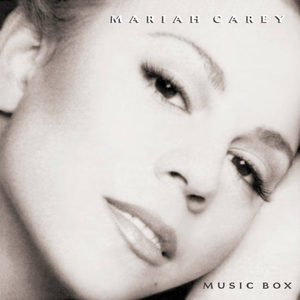 (* track included on European edition only)

Sometimes it is preferable to listen to a record and know nothing about the circumstances of its making. Were I to assess Music Box on its basis alone, I would call it a reasonably convincing middle-of-the-road pop album with moments of uncanny transcendence. “Anytime You Need A Friend” harmonically echoes “Beatrix” by the Cocteau Twins - the E seventh/G sharp sting of poignancy – before you remember how grudging a record that same year’s Four Calendar Café was. The faster songs are bountiful and welcoming; the folksy trot of “Dreamlover,” the C + C Music Factory direct-inject anti-schmaltz ray-gun on “Now That I Know,” the purposeful Swingbeat of “I’ve Been Thinking About You.” At other times – specifically the title song and “All I’ve Ever Wanted” – the surface beauty is vaguely acquainted with the otherworldly.

The take on “Without You” – a huge single in 1994, perhaps in inadvertent tribute to the then-recently deceased Harry Nilsson – is curiously inconclusive and underwhelming, but “Hero” is a convincing descendent of “The Greatest Love Of All” and became something of an actual “anthem” for those Generation X-ers intent on deciding the procedurals of their own lives (and goes against the grain of most of the rest of the album, but more about that in a moment). The young Beyoncé practised her scales to this album. Michelle Obama played “Hero” to her husband when he was feeling particularly low. Aretha sang the song in dedication to the Rev Jesse Jackson. I cannot ignore this legacy – even if the song was originally intended for a long and justifiably-forgotten Dustin Hoffman/Geena Davis movie, with the intent of getting Gloria Estefan to sing it.

It would be easy to accept Music Box as a skilfully-assembled record, full of love songs, or accumulations of greetings card tropes which from the next room resemble a love song, unquestioningly ideal for those engaged in romance. On that level, and one or two others, it does its job.

But, in the same week that I addressed the thorny story of Ike and Tina Turner, there is ultimately something very oppressive about this record, as though its singer had been compelled to make it. Her second studio album, Emotions, was rawer and more smouldering (if not more explosive) than its eponymous predecessor, and didn’t win any new consumers over, so her record label insisted on something softer, more mainstream, more approachable.

Carey essentially agreed with this – or at least another involved party did – but she was careful to layer live, as opposed to programmed, backing vocals to avert complete blandness. She also wrote most of the album’s lyrics, so there is a very minor level of control at work.

But the overall sense of oppression lies in the album’s nearly endless, and superficially heartfelt, declarations of love and devotion – as though she has been made to write these words – which I believe is akin to musical neutering. I note that one of the defining characteristics of a music box is that it plays the same thing over and over again, and so this endless facsimile of love borders on the suffocating. You do not even have to know about the butter knife story to suspect that this is all too uniformly good to be true. Ronnie Spector recently declared that her former husband was “a brilliant producer, but a lousy husband.” But that get-out clause is absent here (Gloria and Emilio Estefan, in contrast, are equals; fellow musicians in the same band).

Or is it? On the European edition of Music Box – which, living in the UK, is the edition  which I am using here – there is an eleventh song, one presumably kept, or pressganged, off the American edition on purpose; we don’t want to spoil the story, do we?

But “Everything Fades Away” is a patient and quietly violent rebuke against what the rest of the record has been professing to say. Over an ethereal, floating backdrop worthy of P.M. Dawn, Carey whispers: “Don't tell me you're sorry you hurt me/How many times can I give in?/How many battles can you win?” The object of these words is, with hindsight, obvious. The song fades away as slowly as this photocopied document of love deteriorates and separates into its constituent atoms. It is unlike anything else on the record and purposely so. It says that the singer wants her control back – and for his control to end. All music boxes wind down eventually if one does not properly care for them.

Posted by Marcello Carlin at 12:18