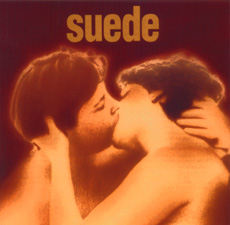 You might look at this roll of number one albums from the nineties and wonder exactly when “the nineties” are going to begin.

(There have been The Charlatans, who did not release any records until 1990, but they formed in 1988 and should properly be viewed as a late entry from the eighties.)

Brett Anderson liked the notion of people putting on the first Suede album and not really understanding what he is singing, or declaiming, right at its beginning. The above is my interpretation of what goes on at the start of “So Young,” but the proclamation here is really not to understand him too quickly.

What that declaration also states is that these are now, at long sodding last, the nineties, and that Suede are the band for these times. And EVERYBODY missed the fucking bus. They could not have existed at any other time, certainly not in the seventies or the eighties, and made a point of that. When Brett met Bernard (and Mat, and Simon) they knew almost immediately that they were special.

“A LITTLE MODESTY WOULD NOT ILL-BECOME YOU, MR ANDERSON”

Oh, naff off. Mozart WAS the best, history has proven that, and just because he loudly believed it doesn’t make it not so.

Suede were a London band precisely because they didn’t want to be a Haywards Heath band; what do you think “The Next Life,” with its immodest dream of fleeing to Worthing and selling ice cream, is about (and yes, I know that's not what it's actually about, but notes in the air, and so forth...).

The first Suede album marks a period in the early nineties when London had got the balance just about right. It bookmarks a brief era when skint people like Brett Anderson could rent a flat in Notting Hill – right in the middle of town! – or Bernard Butler in West Hampstead. This was a time when the city had finally shaken off its post-war reserve, centrally-situated housing was plentiful and inexpensive, and anybody could live in it, and do their best, if not to change the city, then to leave their very firm imprint on it. When people like me on a basic Whitley Council Administrative and Clerical Grade 4 salary could run flats in Chelsea AND Oxford. Now it’s all empty bitcoins for absentee overseas speculators, or rabbit hutches for bankers.

People spoke of Suede’s attraction towards the “low” life; and yes, I know that so much of what is sung about on their first album is about being in London in the first half of the nineties, being broke and being off your head on drugs. So disqualify them from your Hall of Fame and replace them with, I don’t know, the Spin Doctors.

Or, as so many imbecilic people did at the time, attempt to shoehorn them into a movement with which they had, and would have, no truck. Brett Anderson has often expressed his extreme displeasure with THAT cover of Select Magazine – here was the beginning of a road which eventually led to Brexit. Suede were not Britpop in the same way that I am not a dentist. They just weren’t. Like Radiohead, Tindersticks and Stereolab, they were apart from that and perhaps some way above it.

Jumping the gun; there was an abundance of that. The reviewer in Q magazine suggested that “Bowie and the Smiths are obvious points of reference.” Actually, Suede were nothing like either. There is a residue of the more purposeful, Marr-driven Smiths which we hear on Meat Is Murder through songs like “Moving” and “Animal Lover” – and it is notable that Anderson subsequently suggested that both songs could have been taken off the album and replaced with “My Insatiable One” and “To The Birds” (which at the time were requisitioned for single B-sides, in an age when singles still mattered). Nonetheless I think that both songs furnish the album with architectural symmetry, and both bear the air of long-suppressed (sexual?) tension being finally and gloriously released.

Despite the anxiousness of critics probing for facile reference points – chiefly to cater to the predominantly middle-aged demographic of the magazines for which they wrote – I do not sense any Ziggy influence on “So Young” or “Animal Nitrate.” Butler’s lead guitar lines on both are sinuous, snake-like, sound as though they are emanating from within your ear or are caressing your neck, but both songs are much slower – if we must, they are more priapic (the tempo of, say, “The Drowners” corresponds directly to the average hip thrust performed during the act of sex) – than a pop Bowie would have permitted. They are about pop, these songs, and not quite pop, but probably beyond pop.

What NOBODY got was the true and unacknowledged main vocal influence behind Anderson – and yet, in places here (“STOP TAY-KING ME OW-VAAH!”) it is plainly obvious that he had absorbed the approach of Gary Numan (who in turn had got some of his plaintive commonsensical speak from Robert Wyatt), and there is also more than a trace of the actual Anthony Newley, the one who in 1964 sang “The world is full of…DISSONANCE!” (“The Winter Of My Discontent,” from the excellent album In My Solitude).

What most critics preferred to do with the first Suede album at the time of its release was to nitpick, because there is nothing that music critics in Britain like and anticipate more than a backlash. "'Suede faces the same problems [as The Smiths did] and similarly fails to deliver on a few, admittedly trifling, levels,” said the NME reviewer, as though marking an end-of-term report card.

No it fucking doesn’t, pal. What nobody was able or willing to grasp in 1993 was that there is really no comparison point at all for what Suede do on this record. True, they were noticeably more febrile and “powerful” in concert – the 2011 deluxe reissue of the album includes a DVD of the band’s Brixton Academy gig on 16 May 1993, which I attended, and I can attest that this was indeed the case.

Suede is as unlike “rock” as anything I can think of professing to be such. Even in the middle of storms like “So Young” and “Moving” there are interludes of limpid gentleness, a hand of affection stroking any pre-programmed cynicism away. No one else was doing anything like “The Drowners,” as its many subsequent imitators – the drum intro would go on to become a staple feature of what came to be known as “landfill indie” – testify.

And, in many places – “She’s Not Dead,” the brilliant, gradual structures of “Pantomime Horse” and “Breakdown” – the implications of Suede’s art may transcend music. Butler gives us those chord changes, those pedal and delay effects, exactly as you had been anticipating, and does so with such ready openness and natural genius – the guy was twenty-two, for fuck’s sake! – and the fusion of his tenderness with what is basically an arty variant on ooer-missus-what-will-the-vicar-say sex gags from Anderson is unmatched and possibly even super-human; the perfect balance of brutality and delicacy.

For Suede is perfect. Perfect. There is nothing about it that I would change, or want to change. The way in which the string quartet stroll in and out of the cloisters of “Sleeping Pills” without your even noticing that they are there, while Butler’s disquieting guitar commentary illustrate the inside of the mind of the desperate Valium Court housewife (the song plays like a mildly admonitory love letter to Beverly Moss). The manner in which “Breakdown” steadily builds from whisper to eruption, Simon Clarke’s saxophones (actually the record’s nearest sonic relationship to Bowie – the Bowie of Let’s Dance) shadowing Butler’s thrash like butlers shadow their masters.

I could listen to this record two thousand times and not get bored with it or run out of things to say about it. But let us leave, as this record does, with “The Next Life” – Butler at the piano – which is NOT a rock and roll suicide pact, but rather the signpost of a journey into the future, which hopefully its singer and songwriter will steer with authority (it was written about Anderson's late mother but I think transcends even that inspiration). And, at its delicate end – really, it is the most delicate of endings – Anderson turns to us…and summons Billy MacKenzie (“we can flyyyy A-way”; that “A” hiccuped an octave above, like a heard tear). It, and the record, patiently dissolve into non-existence.

And some people, as I say, just didn’t get it, or them. I knew one of those people very well. I therefore felt that I was on my own with the record and the group, as so many of the people at the time – and of the “right” age and circumstances – unquestionably did.

I know there is a pronounced absence at the centre of this record and that the absence in question is what umbilically links Suede to another band – they do not speak of each other to this day – who released another profoundly misunderstood album in 1993.

“She’s fucking with a slip of a man.”

I also know that Suede perhaps took the elements of shoegazing and elevated them – gave them wings and life (and songs).

Finally, I know that this album, perfect as it is, wasn’t even as good as their second album (which didn’t get to number one).

There were Union Jacks and you’re-my-mate-hic and there was glam but there was also art, and not that sort, either.

I was too old for it. I wasn’t old enough for it. Rob Fleming wouldn’t have had a clue what to do with it.

The album was released on Nude Records. A cover shot of two androgynous people kissing, and when you cut to the full picture, one of them is seated in a wheelchair.

Did you know what love is? Do you still not know?

“She doesn’t think she’s worthy to live. But she doesn’t realise, she is life.”

(Derek Raymond, He Died With His Eyes Open)

(Author’s Caution: This piece is in part derived from preparatory notes which I made in Oxford, Westminster and Hammersmith during 1993. What happened to the paperwork? It all stayed in my head, like old Top 40 charts. As the late Mr Raymond – whose real name was Robin Cook – says in the abovementioned novel: “Every day you amass knowledge in a frantic race against death that death must win. You want to find out everything in the time you have; yet in the end you wonder why you bothered, it'll all be lost. I keep trying to explain this to anyone who will listen.”)

Posted by Marcello Carlin at 12:33