Elton JOHN: Don't Shoot Me I'm Only The Piano Player 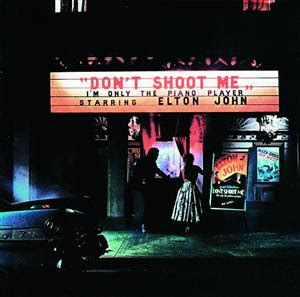 The current critical talk is of something called, or conveniently termed, "retromania," a hungering for and/or obsession with the past which feeds its way into the present such that bearings are lost; things of the past lose their original context and become merely another vaguely exotic flavouring, leading towards a broth so bland that the future, if any there be, struggles to be heard and may even be suffocated. Although the early seventies' obsession with the recent past, and the fifties in particular, was far from the starting point of all of this - as some pre-Beatles entries in this tale have already demonstrated, there was a time when a good deal of early sixties music followers wanted it to be the twenties again - it did begin to cast a shadow over the supposedly eternally renewable futurism of rock music. The history had already been made, was already being cited and mourned, and even in 1973, despite the violent thrusts of the past into the future being made by Roxy, Bowie and others, there was the creeping feeling that "we" had already seen the best of it, that "it" (the spark or shock of the new) had effectively ended by 1968, that all that was left to do was undertake endless, knowing recreations of a negated newness, a redundant (because spent) nowness.

Some artists who did this were subtler and more persuasive than others, and Elton John is a key case in point. His first UK number one album (and in the UK, it would prove to be 1973's biggest seller) has tended to become ignored in the imposing shadow of its two hit singles (and also, puzzlingly, at the time of writing, one of the hardest of Elton's albums to find on CD) but as a retro-summary of where pop music had got to - or got us - in early 1973 it is hard to beat. It works, I think, as did Elton at his peak, because it, like the artist, knows its limitations; it does not expressly make any big statements, but its framing device of Vietnam is the conduit which makes the tinted nostalgia bearable, since that means the record is acutely aware of its present tense. Likewise, given that the record is effectively a collaboration between a musician and non-musician (lyricist Bernie Taupin is given nearly as many photos in the inner sleeve as Elton; this is definitely a duo of the Paul and Barry Ryan, or even Carla Bley and Paul Haines, type), it relieves Elton of the burden of having to express himself directly, since Taupin is there to articulate his ruminations and lamentations, leaving him free to sculpt the music as he sees fit.

The music of Piano Player, as with the words, don't cut through with quite the same prescience as those of its predecessor, Honky Chateau, but again "profundity" would be a hindrance here; the expression has to be light, the music has to be attractive enough to get us to listen to what it's trying to say. Hence opener "Daniel" became a big transatlantic hit single mostly on the grounds of its being a pretty, and thoughtfully expressed, tune; the man - or boy? - is supposedly heading for Spain, but this isn't the nearly-carefree insouciance of something like Steve Bent's "I'm Going To Spain" (wherein, you may recall, the factory floor present him with "some tapes of Elton John" to keep him company on his travels); the "God"s and "star"s are accentuated in such a way as to imply that he's not coming back, indeed is going much further than Spain, to fight. Similarly, the easy-going Van Morrison canter of the closing "High Flying Bird" is there to mislead the ear; what sounds like a fanciful mourning for a lover who's fled ("I thought myself her keeper/She thought I meant her harm") turns into a deeper lament; the scarlet red staining the white walls of the dressing room, the "little cross of gold," the "cold stone" and the "foreign field of death" - all remind us with subtle forcefulness that the visitations of the past are there to deal with, and not merely escape from, the bloodiness of the present.

In between these two cold peaks, the musical mood is rightly kept light-hearted, amiable, although the ghosts sometimes still escape; the Moody Blues echoes of voices and mellotrons, for instance, which intrude upon the throwaway rocker "Teacher I Need You" before normality resumes. "Elderberry Wine" disguises its rancorous tale of abandoned love underneath a jolly ray of McCartney kazoo brass lines. "Blues For My Baby" is the record's major setpiece; he and his lover are running away from their oppressive families, striving to get on board the Greyhound bus heading west, as far away from the past and its attendant pain as possible, and its patient progress is most notable for the slow and subtle changes in its arrangement; a sitar steals gradually into the ballad, while Paul Buckmaster's string section steadily increases in grandeur and volume as the screen widens out.

"Midnight Creeper" is a comedy "Midnight Rambler," with exuberant French horns doing their best to imitate chunky baritone saxes and Davey Johnstone's exclamatory guitar, Elton having great fun with his Tina Turner citations and constant self-denials ("I still don't know why you hate me so"). "Have Mercy" starts deceptively, a little like a Philly Sound remix of the Sweeney theme, before slowing right down to a crawl in which Buckmaster's strings alternate between harsh lead lines and soft support, possibly influenced by Lennon's "How Do You Sleep?" Elton's vocal, too, is hard and unyielding by his standards ("Just TAKE! These CHAINS! From AROUND my legs!"); Johnstone's guitar heckles from the audience pit.

From being held down by the wardens in the face of a rifle butt, "Teenage Idol" revels in its proposal to turn its protagonist's old guitar into a tommy gun; musically a precursor to "Bennie And The Jets" in both tempo and mood, the song is an affectionate tribute to Bolan but also a plea to himself; to get him out of his "one room dive" and become "a motivated supersonic king of the scene," and above all to get him away from the drink - and alcoholism, directly or indirectly referred to in almost every track, is this album's elephant in the sitting room.

"Texan Love Songs" takes Gram Parsons as its musical template and lyrically is a rollicking send-up of redneckism, and to a greater extent of the "silent majority" who voted for Nixon, didn't want change of any kind, and indeed resented these "fairies" with their "drug-crazy songs" and "communistic politics" who came along, dared to drink their beer and have a better life than them. Randy Newman's "Rednecks" tackles the same theme with under-the-door subversion and arguably greater profundity but this more than did for and within its context.

"Crocodile Rock" has always seemed to me a considerably smarter variation on the "American Pie" brand of pseudo-eulogy; it reaches back with leaping, major-key enthusiasm into a largely imagined past - did anyone ever attempt to do a dance called the "Crocodile Rock"? - which nods as happily to Pat Boone ("Speedy Gonzales") and Johnny and the Hurricanes as to its present (the rippling synth riff). And it's entirely possible that Elton is here singing about the song's protagonist as being rock 'n' roll itself; it's had its history, Suzie "left us for some foreign guy" (the Beatles?), and the singer has accepted that rock is "dead" but is happy to live in his constantly altering past; it extends a keening thumb towards the future, whereas Don McLean simply draws a dead, thick line over history as we were supposed to know it. In Britain, glam would take that revivalist shield and sculpt it into futuristic forms; but in the States, Elton would stand for the point where the past might still meet the future, at a point when all of the future seemed lost. In his next number one album, he would meditate at some length about how difficult it can be to get back to any meaningful form of "home" - it may be 1973, but the yearning for home has not disappeared or vaporised - but it's still worth getting past the mock-up vintage movie poster at the cinema door and the grinning photo of young Reg Dwight at the parlour piano, and looking at the bigger, and more complicated, picture.
Posted by Marcello Carlin at 16:06