Gloria ESTEFAN and MIAMI SOUND MACHINE: Anything For You 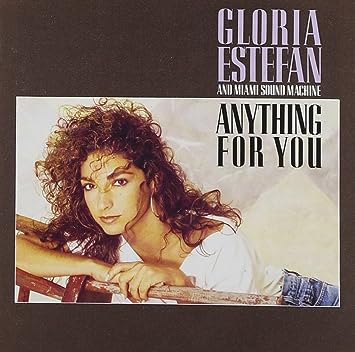 Why is Anything For You vastly more entertaining and inventive than A New Flame? I could set up some blanket trope about Americans (or, in this case, Cuban expatriates) doing it better than the British, or women doing it better than men – but whether Miami Sound Machine or Gloria plus MSM or Gloria alone, this is essentially a husband-and-wife double act.

It is, crucially, far lighter in tone and far more fun to listen to than Simply Red; you do not feel that you are doing penance or being sternly lectured. Its basic subject matter is one of the oldest and most durable in pop, that of the girl who secretly knows this boy’s no good but is nevertheless drawn to him and even loves him. The opening “Betcha Say That” sets the tone; beginning with a huge backwards panoramic thwack like a Fairlight soldering iron, it proceeds jauntily with regular upward curves (or raised eyebrows) of synthesiser which rub together, not unpleasantly, with a pop that is immersed in its past – “Let It Loose” and “Love Toy” are just two other examples of sixties girl group methodology let loose in a spaceship – but which leaps to grab the future. Hence all of these three songs, together with “Give It Up,” feature intervals where stuttering electronics shift the song out of focus and tonality before normal service is restored.

Most importantly, Gloria Estefan is one of pop’s great actresses. Her performance on “Betcha Say That” moves with absolutely natural ease from cynical via cautious to committed (though her “B-b-b-baby” indicates that she still has merry doubts), and the music – including fellow Miami singer Betty Wright on backing vocals, here and on “Surrender” – is behind and with her all the way. On “Let It Loose” – this album’s title track when it was released as such in June 1987 (it was subsequently repackaged and retitled for Europe and other territories) – one is pleased to hear Clarence Clemons, almost absent from Tunnel Of Love, having some fun with his solo.

The album’s three ballads are among her greatest achievements. “Can’t Stay Away From You” was the one which perspicacious critics compared to Karen Carpenter, although while Gloria’s voice is clearly capable of expressing the same kind of stoical hurt, she is unafraid to raise her voice in ways that Karen never really tried (or was allowed or asked to try). Hence her desperate devotion is more palpable, but she is equally resolute not to break down: “But if all I’ve been is fun/Then baby let me go,” is one of the record’s most striking and hurting couplets, and she sings it as though a close relative has unexpectedly died. But she knows this routine too is, when one comes down to it, “fun”; she twice admits “And though I’ve heard it all before,” indicating that this probably won’t be a goodbye. The song is an exercise in excising life from the jaws of slow death.

During “Surrender” the Cuban influences start to nudge their way into the music explicitly (Paquita Hechevarra’s exuberant piano solo is the most obvious signifier of this) and throughout side two they slowly become more pronounced. “Rhythm Is Gonna Get You” and “1-2-3” are so sheerly catchy, danceable and good-humoured that they remind me of very early Madonna, before people started telling her that she was “great.” Equally, “Love Toy,” with her husband Emilio, amongst others, eagerly responding in the background (“No batteries required!,” “Wind me up and I start to move!”), is rather like Ze Records doing a kindly send-up of the Captain and Tennille.

But “I Want You So Bad” is the one here. Free of percussion or discernible tempo, this is so mighty a performance I’m surprised Melody Maker didn’t immediately jump on it, with all their talk of “oceanic bliss” and suchlike. Here the singer is as unmoored from the music behind and around her as Alex Ayuli is on side two of AR Kane’s 69; she sings in front of an immensely pacific seascape of synthesisers and bass guitar, as lost-waiting-to-be-found as the Elizabeth Frazer of side one of the Cocteaus’ Treasure; she feels him but is still unsure (“I’m so scared I’m afraid/I can’t find a way/To say I love you”). At one point the music halts altogether, as if to catch its own breath, before restarting; at another point shortly thereafter the bass arches once, like a reluctant whale, and later still Estefan freezes on the “swear” of the line “I swear that’s no lie.” Anybody who venerates the OMD of “Stanlow” and “Sealand” will find common ground in these unexpected surroundings.

The album ends with its title track, the third of its ballads, and the scenario is the same as “Can’t Stay Away From You”; this time, she initially seems able and willing to let him go, even though it’s inwardly tearing her to pieces, but as the song progresses and gently gathers pace and texture, her voice gradually rises to meet the elements; by the time she gets to her second “And though inside I feel like dying/You know you’ll never see me crying” you can’t believe her. Brass, guitar and percussion shuffle in to take control of the song and also to offer optimism to balance the singer’s subtle defiance; the moral appears to be that these two people will orbit each other forever and never quite lose (sight of) each other. Anything For You is an absolutely cracking pop record. Who, apart from the Pet Shop Boys and maybe Chuck Eddy, would have admitted so much at the time?

Next: Everyone must stand alone. You sure about that?
Posted by Marcello Carlin at 13:07