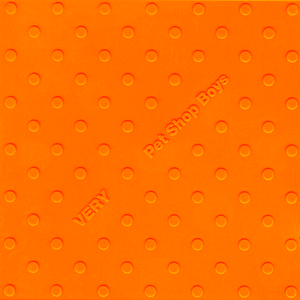 “Do I have sufficient confidence to let anything happen? As you light the Amaretti papers they flare up and disappear into the dark.”

“And I know we’ll meet again.”

(Conclusion of lyric to “Postscript [I believe in ecstasy]”)

The fifth Pet Shop Boys album (not counting remix albums and compilations) – I don’t know that it could have been entitled Siren, although “A different point of view” might be their “Love Is The Drug” – is usually regarded as a record of emotional emergence. Around the time of its release, Neil Tennant finally came out of his diplomatic closet…and there is certainly a huge aura of release throughout Very, the spectacle of hitherto suppressed feelings and colours being allowed to infiltrate the air.

They had been very keen to do something entirely different from – a lot less moody, at least on the surface, than – Behaviour. As with U2, they decided: enough of reserve and keeping it real (even though “Liberation” here is one of their realest songs, up there with “Love Comes Quickly” and “Being Boring”), welcome the artificial and purposely contrived. Sweat and denim? They’d rather have primary-coloured dunce caps and stepladders (and Denim)! Eno might have ordered Bono and the boys to investigate My Bloody Valentine and the Young Gods, but Neil and Chris were looking for songs for Kylie (“One and one make five”) or Take That (“One in a million”) to sing.

You don’t have to know pop to be pop, but there’s as much junking of morgues – albeit perhaps in a more determinedly dignified manner – as can be found in that other 1993 smorgasbord of possible pop, Saint Etienne’s So Tough. Yet if the latter is proudly provincial in a north-west London sense (“Mario’s Café”), Neil and Chris made straight for the heart of the city itself – they sing not of Kentish Town, but the Strand.

Stephen Hague produced, as he had done Republic (or better than he had done with Republic), and finally, over five years after their “imperial phase” had apparently expired, the Pet Shop Boys got a number one album – and a richly deserved one Very is, too. It’s only one of the best number one albums there have ever been, in part because it makes such little comparative fuss about being so.

If Very was their “coming-out” album, then its sequencing was very (ha!) expertly choreographed. “Can you forgive her?” sees its protagonist reluctantly schaffel out of his self-protected closet – his girlfriend is so scornful because she knows his true self and is impatient for him to be honest about and to himself. He tries to be regular and upstanding but he and she know in their gut that it isn’t him, that he cannot banish those cricket pavilion and bicycle shed awakenings – it is a clever reversal of the incidental scenario described by Trollope in his similarly-titled novel of 1864, as though it were Plantagenet Pallister encouraging Lady Glencora to drop the bullshit and go off with Bungo.

Somehow, that sets the worried man of Very – you see, it really isn’t that far, thematically, from some of the second Band album (“The Unfaithful Servant” might in a different universe be a sorrowful reproach to the over-anxious singer of “One and one make five”) – free. One of the record’s brighter aspects is that so much of it seems to have been recorded in an amusement arcade filled with computer games, with lots of incidental beeps and whooshes throughout most of its songs – not so much the “lost in a sea of glass and tin” of Roy Orbison’s “Penny Arcade” but as rhetorical as the intermittently hammering drums which crop up semi-randomly throughout the straighter sections of Mike Westbrook’s Marching Song (to remind the listener that there’s a war going on here).

So “I wouldn’t normally do this kind of thing” is a very decent bubblegum song which would find easy accommodation at Boom FM; the Beatmasters’ single remix accentuated the song’s sixties aspects – there, one could imagine the Paper Dolls or Tina Tott performing it (not to mention Brother Beyond) – but which also highlights that bridge maintained with New Pop by mentioning The Rite Of Spring, as had previously happened in the dialogue to Loving You.

“Liberation” is a natural emotional successor, and as straight and ambivalently honest a love song as the duo have ever managed, with some delicately unearthly Swing Out Sister harmonic modulations from verse to chorus (E major to B flat minor, like a Renoir sky succeeding a Whistler one). “All the way back home at midnight/You were sleeping on my shoulder” – memories of the Oxford Tube for sure. “A different point of view” is more insistent and probably more fun, but note how its staccato defiances help pave the way for some of Xenomania’s adventures in the following decade.

“Dreaming of the Queen,” however, might be one of their profoundest songs; it materialises as a sort of bookend to Actually’s “It couldn’t happen here” – and the duality of that title was, I’m sure, intentional. There she is, along with the woman then known as “Lady Di,” and they both lament that “There were no more lovers left alive” (an indirect reference to the Dave Wallis novel quoted at the top of this piece, a copy of which Tennant says he was given by Jon Savage – Wallis was born in Marylebone but essentially raised in…Montreal!).

The song’s subtext surely does not require retelling here, but its deeper reality becomes more apparent when it reaches its payoff:

…and you know, without anyone ever needing to tell you, that this was how so many people were made to die. I’ve read Derek Jarman’s diaristic account of his life, such as it became, from 1989-90 (in which Tennant is an intermittent presence) – and have lived through enough things to know that this is about that disease whose mission seemed to be, to kill love. Much like the one facing us now, some might lazily say – but the harrumphing finality of things barely thirty years ago is not a golden age which I might wish to revisit.

That finality is underlined, and perhaps cushioned, by a very familiar-sounding orchestral embrace – it is a variant of the one which arranger Anne Dudley had previously deployed to enfold the utterly empty Martin Fry of the climax of “All Of My Heart.”

The light/dark switching continues. “Yesterday when I was mad” bitches enjoyably about dumb reviewers and their asinine comments (the song was inspired by their American tour of the period) while moving from hard techno to plaintive 6/8 stroll then back again. “The theatre” is an awesomely angry epic and an unlikely but logical counterpart to New Order’s “Everyone Everywhere,” which was also about the homeless; however, instead of finding salvation with each other, the homeless refugees here (from, amongst other places, “Scottish towns,” for those who recall “Smalltown Boy,” or indeed “King’s Cross”) turn with immense sadness to the theatre-leavers and Standard readers and with pacific ire tell them that they know they are being stepped over and ignored for the crime of failure. Again, Anne Dudley steps up to the plate with her ingenious orchestrations; at the point where The Phantom Of The Opera is mentioned, a glockenspiel briefly pops up in the middleground to play an appropriately thematic refrain. There is also a choir (“of actors, from a drama school” apparently), as though the entire universe is now laughing at the twelfth-best sad sacks emerging from those London Bridge trains.

“One and one make five” was, the duo thought, the album’s natural lead single, but it is probably dressed a little too fussily for immediate impact – it is a fine song, but absolutely an album track (I can’t really envisage the Kylie of 1993, getting ready for “Confide In Me,” singing this). Whereas “To speak is a sin” was one of the Pet Shop Boys’ oldest songs, and also one of their saddest – two cynical old men in a gay bar, too buttoned up and “cool” to talk to anybody else in there, and the inevitable ocean of melancholy which ensues (the Fairlit saxophone lines here represent a further dehumanisation of Bowie’s “Subterraneans”).

If they did have the nerve to talk, though, they might sound like the protagonist of “Young Offender,” who complains about Kids Today, or more accurately one Kid Today, playing his new-fangled computer games – he despises himself more than he does the kid, and if anything he fancies the kid somewhat (“Who will give whom – that “whom”! – the bigger surprise?” – although Dudley’s eventual subtle orchestration is itself a delightful surprise). But “One in a million,” written for Take That in mind but never actually recorded by them (they were seemingly up for it but but but management politics…), is an excellent and straightforward song (or as straightforward as a song about a lover anxious to prevent his love affair from ending; this follows on from the “you say tomato”isms of “A different point of view” and the paranoia of “One and one make five”). The point is that they were genuine fans of Take That, as opposed to stalwart fans of, say, Senser or Cud. They understood – and to this day understand – pop perfectly; hence Very represents that most chimerical of chimeras – “perfect pop.”

It ends with their “Go West” because it had to. Chris suggested the song to Neil, who oddly had never heard (of) it. He listened to the Village People original once and hated it. But Chris convinced him to give the song a try by pointing out its harmonic similarity to Pachelbel’s Canon, and so it was transformed into another defiant gesture of socialist solidarity, even with imprecise lyrics.

Their ”Go West” was ostensibly about Russian perestroika, but its implications far exceed that; the name of Jarman springs to mind again, given that the gay utopia which the song had once promised had singularly failed to materialise. So it acts as a song of advancement in an age of involuntary retreat – somewhere, there is a place for US. And, while the duo plaintively perform the song, in some ways already planning a memorial – for soon Jarman will no longer be, and neither in a few years’ time will be Lady Di – there is an exuberant gang of guys behind them, just as there had been on South Pacific, yesterday when the Pet Shop Boys had been boys. Their work done, the song slowly fades to a Warp bleep with murmured choirs of concurrence – and after a couple of minutes’ silence, we hear, of all things to hear on a Pet Shop Boys record, a harmonica, and, at long, long last, the voice of Chris Lowe himself, offering his brief and thankful valedictions. They have released themselves into the wider world – and find it deeply to their liking. As should so many others have been permitted so to do.

“You say to the boy open your eyes

When he opens his eyes and sees the light

You make him cry out. Saying

Posted by Marcello Carlin at 11:22