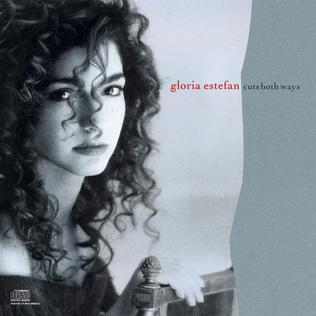 
As a woman writing about music, I tend to think - I like to think - that I am writing not just for my own self but my own sensibility.  And what is that?  More than a bit aimless; ready to listen to anything if it is good; appreciative that there are times when I don't want to listen to something that the (still overwhelmingly male) music-writing massive would call "important" or (ahem) "seminal."

Which is to say, Cuts Both Ways did not make the critical end-of-year lists in the NME, Melody Maker nor the Village Voice.  (As for Robert Christgau's review of this album...well...) It is at these times that I think the whole rock consensus as to who is good and who isn't really truly needs to be thrown out, as it doesn't value an album like this nearly enough.  (I may as well say the rock hegemony has a problem with women all together if they make pop/r&b - the "oh, that's nice" syndrome meets the "there can only be one at a time" problem and it's the same today as it ever was, alas.  At the same time, could there have been a Jennifer Lopez without a Gloria Estefan?)

It is their loss, of course, and those who kept this at #1 in the UK for over a month were likely those who don't pay much attention to the music press in the first place*.  This is Estefan's first solo album, and she sounds more upbeat here than on Anything For You; it is as if her apprenticeship as one of Miami Sound Machine (woman-machine) is over and now here she is, a woman in her own right (though MSM are still there, more or less).

Is this album worthy of one of those sit-down-don't-fidget Classic Album listening experiences?  Yes, it is - the album builds up, as all good ones do, with...

"Ay, Ay, I" begins the album with the main theme - "I can't do without you" - and all the troubles that come from this irrefutable feeling.  (This album is about feelings, and some boys - not men - have problems with feelings.) Musically it jumps along like Janet Jackson, and she sounds as determined to win back her Other, who she knows loves her, even though he sets her up, knocks her down.

Things slow down for "Here We Are" - is it wrong for me to think of a cool evening after a hot day, and it's the world of love and hurt that lingers, light as a perfume and just as sad, in a way.  She wants her Other, but for some reason (never stated) they cannot be together.  Is one of them...both of them...with someone else?  The focus is on the narrator and her crushing love for her Other, one that she calls "sublime" and one so intense it makes her cry.  Estefan wrote it (as she wrote most of the songs here) and sings it with a kind of elegance that comes out of an actual experience, remembered.  (I have no idea how autobiographical these songs are, by the way; but she sings them as if she knows what she's talking about - from the heart.)

"Say" is about wanting to hear from the Other - oh, I've had this too Gloria - where you get all excited by the Other but when are you going to hear that declaration back?  This is no mope, but an upbeat song (by the then-up-and-coming Jon Secada) that is like a cheerleader jumping around more than someone saying "please, please say something."  That said, waiting for someone to say "I love you" is tough - "don't wanna worry, but is our love alive?" asks Estefan, then recovers from her doubt, as her - yes - feelings about her Other are so strong, in the end.

"Think About You Now" begins with "Is it worth the time/To bring back a forgotten rhyme" - as if Estefan is now lamenting the loss of a poet, or of language itself.  The affair is over, but the thinking goes on, and of course there is no one else who "could have the same effect on me" - love is indeed the drug, and her Other has left her in half hope, half existential despair.  "It won't be long before I'll be with you somehow" she sings, sounding sure that something will be worked out, maybe once she can rouse herself out of the languorous longing of the song itself.  (And yes, that's Jon Secada in the background, sounding a bit eerie, a bit Michael McDonald.)

"Nothin' New" sounds like go-go, a little Frankie in the chorus (hoo-HAH-hoo-hoo-HAH) and is a weird song about how difficult love is and there is nothing new under the sun and whatcha gonna do about it, kid.  It is a "we" song - "life goes on no matter what you do" is the main thrust, and we are practically in Nein territory here.  There is nothing to do but love, and it's not new and so what.  You have to trust and do the best you can.

"Oye Mi Canto" is about being who you are, standing up for what you believe in, but also - how unrock! - "Find common ground/Go in between/Things aren't always what they seem" - and how feminine is a song that says "Why always take/The upper hand/It's better to understand."  All this to a salsa where she laments - about what? - "Hate is so common it's almost tradition."  I am guessing this has something to do with politics, and who could be happier about the US and Cuba having better relations than Havana-born Estefan herself? Hear my voice, the song says, and suddenly it's not just about the Other but about all Others - and the one voice becomes all voices as the others join in at the end.  Once the political is introduced, it of course goes on to shadow the other songs...

"Don't Wanna Lose You" is a ballad about hope, self-confidence and real love - love that gives of itself, that admits truths, and is willing be courageous and say the awkward, real thing.  Her Other may not want her, but she's sticking around, as she knows they are "gonna get through somehow."  The song is one of real devotion and is grounded, in the best way.  (Estefan's realism in love reminds me strongly of George Benson.)  Estefan's good faith is cheering, and continues with "Get On Your Feet" - a song to someone who is down - "so scared that life's gonna pass you by/Your spirit dying" - oh existential horror!  But Estefan & Co. are like a big hug and smile here, willing the listener to get up and dance and get going, that action is better than being a dull slugabed.  That's not very rock either, now that I think about it...

"Your Love Is Bad For Me" brings us back to the torture of "Here We Are."  The longing here is more explicit, and the badness is just part of her pleasure, in the end.  "I'd love you till you could not take it any more" is followed by "Then you'd walk out the door."  Estefan - or the narrator - is not messing around here.  "You don't belong to me" is the thorn here, the moment when all this sleepless insanity and melodrama has its reveal, and it's done lightly, as if the badness - he's cheating! with her! - is the cause of her love, as much as the Other.  (I can imagine whole Oprah programs about this, with guest psychologists and everything - I'm The Other Woman And I Feel Conflicted.)  What on earth could Emilio, her husband, make of all this?

The album ends with the title song, one that implies violence.  It is quiet and reflective, at first, as Estefan admits that she and the Other are "heading for a broken heart" - and then picks up when she admits that she loves her Other too much, they both want too much..."Don't be a fool/Haven't we already broken every rule?" she asks, as if the awful end is already in sight.  There is no way out; it's too dangerous, too dangerous to continue, and too dangerous, apparently, to ever really end.  If love is the drug then this is the comedown, the time when the actual situation has to be reckoned with, and Estefan's voice is tough, vulnerable.  Their love is like a knife; neither is strong enough, willing to sacrifice, to end it.  This is not the rock joy of extremes (or of overcoming extremes) but the blunt fact of how love is powerful and painful and is much, much stronger than any individual who thinks that with a bit of pep and realism for sure things can work out.  Well, says Estefan, maybe, but also maybe not - this is the ground of Cuts Both Ways, a place where the heart can be open and rebel and revel in its badness, only to be caught up short by that badness turning into something more complex, the lover realizing that they actually do have feelings that pierce and the knife may as well be an arrow...

It is because she is so willing to get into the guts of these emotions - many of them painful, if self-inflicted - that Cuts Both Ways works so well.  While it was at the top other albums appeared - Adeva's Adeva!, Shakespear's Sister's Sacred Heart, The Blow Monkeys' Choices, Fuzzbox's Big Bang! - which also had their realities and tough voices (and like this album mostly bought by women - including me). That Estefan was badly injured while on tour supporting this album - and came back, determined and grounded as ever - attests, as she might say, as to how strong an album this is, how its floods of emotion and cool intelligence balance each other out, how striving for the middle ground can actually be far more difficult and rewarding than giving up or taking the easy way out.  Neither of those are ideas Estefan could endorse, and the pleasures and agonies of the songs go well with a time when no one quite knew what was happening, when the decade was coming to a close and feelings and emotions were coming to the fore...a time for complexities to be faced and worked out, however painful, for the sake of the Other, or Others...not very rock, but then this is the ocean of sound, this is that cool night after the heat of the day, the long letting-go, emotions and waters that only look placid...

Next up:  look what Bunny wrote!

* Not all of them, though.  I'm sure the Pet Shop Boys bought this and loved it.