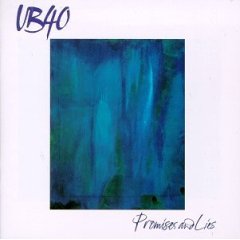 “It is almost as though — epistemologically-speaking — the critique of the national state and the limitations of methodological nationalism have yielded an orphaned cosmopolitanism. We can drift back into the bad habit of imagining that the kind of analysis we articulate is good for everywhere and for always, or somehow floats innocently between those different locations.”

(Paul Gilroy, in conversation with Rosemary Bechler on the openDemocracy website, May 2016)

Searching the internet for commentary on Promises And Lies was a one-sided affair. “Fans of the [“(I Can’t Help) Falling In Love With You”] single will be satisfied by Promises and Lies, but older fans will find the whole affair rather dismaying,” said Rovi Staff and AllMusic. “This album represents the lowest point in UB40's history,” opined one vitalwill at Rate Your Music; “It is the point at which they completed their transition from reggae to pop.” One would need to trawl a long way to find a good word being said about the record. Alternatively, you could walk the high streets of Harlesden or Brixton and mention the name UB40, and practically everyone you encountered would register their approval and respect.

And yet the CD booklet of this album includes a sort of manifesto by the Anglo-Asian photographer Peter Max Kandhola – born in Birmingham and currently based in Nottingham, and whose treated photographs (“Heaven,” “Love Child,” “Liquid Sleep,” “Life,” “Soul,” “Science,” “Death”) artworks decorate said booklet – entitled (with Blakean relish) Abolition Of Man From The Lost Book Of Souls, in which he argues that “Images are transferred into the imaginative world of symbols and dreams. This could form a symbolic representation in which is sensed the order of living with the dead in form of past memories, everyday feelings and desires. An object sensed in the shape of beauty or decay is distorted into something impossible, eclipsing the present to form the past.”

This is surely the medium through which we have to approach even – or especially – with UB40’s reading of an old Elvis/Andy Williams/Stylistics song (depending upon your age and/or background); a symbolic representation of an assumed shared past, a benign distortion of an assumed memory. Their “Falling In Love,” divorced from the rather ridiculous Sharon Stone film for which it was commissioned and indeed from the overbearing daytime radio playlists of its period, is patient yet subtly martial in its rhythms.

The band mainly ignore the original chord changes (which in any sense stem from “Plaisir d’amour,” composed in 1794 by Jean-Paul-Égide Martini) in favour of what is basically a drone – one-note bass, monochordal keyboards, etc. In its societal implications, UB40’s is really a far more radical exercise in musical anthropomorphism than Spiritualized managed four years later in the unstable fabric of their song “Ladies And Gentlemen We Are Floating In Space” – another distortion into something impossible, from a different part and angle of the West Midlands (although, due to legal objections from the Presley estate, that original version did not become properly available until its titular parent album was reissued in 2009); it is as if Kandholm took a photograph of the song and re-treated it. On a shebeen party level it makes equal sense to Massive Attack’s “Light My Fire” and at the time was equally misunderstood critically.

Much was made of the band having sold out – whatever that means – but on listening to Promises And Lies, I sorrowfully suspected that there is a Joe Strummer-type expectation which is perhaps born to be thwarted. Just as the protagonist of “White Man In Hammersmith Palais” goes along to a Ken Boothe gig, expecting “roots” and finding glossy cabaret, so I think UB40 have been summarily misunderstood by sentimental types who can’t figure their way out of 1980. I probably did much the same in my own previous commentary on Labour Of Love; I fell right into that trap.

Yes, Promises And Lies sounds “glossier” than before, but there are imaginative touches throughout which nod to then-current trends – the electro/dancehall tropes of “Reggae Music” or “It’s A Long Long Way,” the imaginative use of samples throughout, the way in which the accumulated polite disgust of “Things Ain’t Like They Used To Be” is climaxed by a stuttering, disconnected vocal sample which sounds like a machine gun.

And these are some of the angriest lyrics ever to illustrate a UB40 album. “C’est La Vie” concerns itself with the horrific situation in Jamaica following Hurricane Gilbert in 1988, the victims of which received no help from the government whatsoever – shades of recent Texas? – hence the scenario of mothers selling their babies. The lightness of the music is deliberately misleading: “You talk to me of sunshine,” sings Ali Campbell on the Gulf War song “Desert Sand,” “when it’s pouring down with rain.” The title song can be interpreted as an attack on Thatcher and her isms (“You put me down for oh so long/While you sang your serpent's song”). The easygoing-sounding “Now And Then” seems as though sung from the viewpoint of the child addressed in Richard Thompson’s “The End Of The Rainbow” nineteen years earlier, who has now grown up and accepts this disappointment as given. “It’s A Long Long Way” is a merciless assault on gliberal centrists (“You make your contribution and you shed a little tear/And stage your celebration just to show how much you care” – clap by the careless). The overall scenario in “Things Ain’t Like They Used To Be” could and does apply to now. The joyful-seeming “Sorry” demands payback for slavery and Windrush. And so forth.

The music is relatively conventional but the band’s songwriting had not decreased in quality – “Higher Ground” and “Sorry” are as good and fresh-sounding as anything on Signing On, but the context which enabled the latter (within, it has to be said, a white rock media framework) was gone. What might have passed in 1980 wasn’t going to cut it with early nineties playlist mandates or short-term music press stratagems, but there is certainly no qualitative difference between one era’s UB40 and another one’s.

And, somewhere between the two, they managed to touch “the people” and bypass received opinions. Promises And Lies stayed at number one for seven weeks and went double platinum in Britain. Perhaps many of the people who heard “I Can’t Help” assumed that the album was going to be more of the same. But it is a fine, buoyant record which I heard in many newsagents and hairdressing salons over that period. “Are you wondering if there are people who hurt inside the same as you?” asks Ali Campbell at the end of “Things Ain’t,” as though ready to provide us with the desired answer.

“For me the pressure on language is a big part of the political signature of this time. By sharing a vocabulary and rehearsing it as if it can subordinate an unruly world, people do feel an immediacy that cuts into their loneliness, their isolation.

‘That shared poetics helps them to constitute a virtual community which may be widely dispersed — inside and beyond the citadels of over-development. There is an almost theological aspect to it too. It is almost a sacred phenomenon because there are doxa, iterations, responses, and if you are lucky, probably a bit of transubstantiation will happen!”