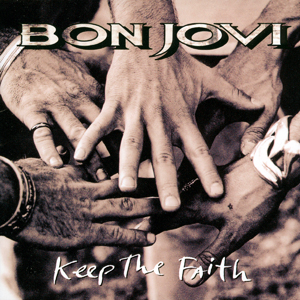 (Author’s Note: Japanese and European editions of the album included a bonus track, “Save A Prayer.” Well, it wasn’t on my copy. Oh dear, how sad, never mind.)

The triumph of Nirvana had shaken up quite a few people, and after a recording absence of four years (as a band – Jon Bon Jovi had come up with the Young Guns soundtrack, and Richie Sambora with an album of his own, in the interim), Bon Jovi presumably felt that they had something to prove. My impression from listening to the seventy-one stolid minutes of Keep The Faith is that they were intent on streamlining their sound, and perhaps on moving more towards Springsteen territory – the long and unhurried narrative of “Dry County,” even the Born In The U.S.A. pounding of “I Believe” – with the irony being that Springsteen, at the same time, was trying very hard not to be “Bruce Springsteen.” The thrust of the title song and the occasional drop-in samples and breakbeats suggest that Achtung Baby might been more on their minds than Nevermind.

Bob Rock was still producing, however, and Desmond Child’s name remains in the songwriting credits for both the title track and “I’ll Sleep When I’m Dead.” The overall result is therefore a mirthless and ruthless stadium appeaser, with big, shouty, simplistic slogans designed to be stamped to by feet and waved at by scarves. There is the infrequent modicum of modest invention – Lena pointed out the resemblance that “If I Was Your Mother” bears to “How Soon Is Now?” – and even elements of inadvertent topicality (in “Blame It On The Love Of Rock & Roll,” Jon sings, or rather bellows, “I got my vaccination from a phonograph needle.” Then again, phonograph? In the nineties??), but this was otherwise a seemingly limitless listen, as well as a wearisome one. For mainstream reinvention of “rock” in 1992, we would instead direct you to The Southern Harmony And Musical Companion by The Black Crowes, a record sparkling with imagination, dynamics and guts (as opposed to gusto), and kept out of this tale only by entry #451. My apologies for this rather damp squib to close an otherwise spectacular week on Then Play Long. There will, alas, be further squibs aplenty next week.

Posted by Marcello Carlin at 09:44