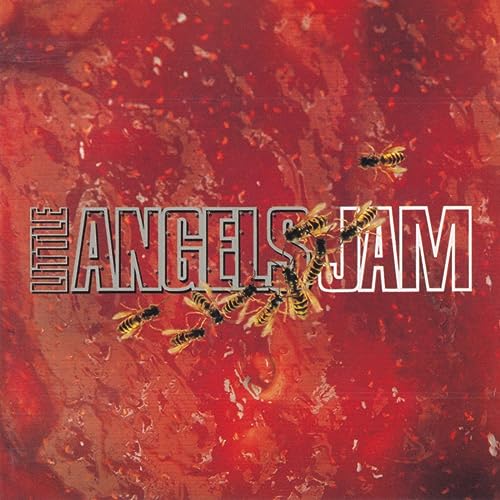 They came from Scarborough, did Little Angels, and their appearance in this tale is almost certainly due to canny marketing; Jam, their third album, was released early in 1993, in the absence of any real competition. It only remained on the chart for five weeks, and runs the risk of being the forgotten number one album of its decade. It may be also the most unfairly neglected.

The band’s trick – or, if you must, “punctum” – was to add a horn section (the “Big Bad Horns”) to their basic mainstream rock template. This works very appealingly, since the horns’ pointillistic punctuations enhance songs like “The Way That I Live” in a manner surprisingly similar to the Blur of “Popscene” or Rocket From The Crypt.

Had Jam been the fourth album by, say, the Wonder Stuff, or the debut album by, I don’t know, Dodgy, it would have been praised to the highest of heavens, and here Little Angels far outstrip either. “The Way That I Live” takes up the baton McCartney laid down with “Jet” and sprints with it, enhancing the song’s standard “I ain't cut out for no suit and no tie” protests quite magnificently. More importantly, lead singer and guitarist Toby Jepson sounds so damned exuberant, so happy to be in front of a microphone and recording these songs, and the rest of the band go with him all of the way.

“Too Much Too Young,” in which a visiting Bryan Adams helps out on backing vocals – though recorded in London and Farnham, the album was mixed in Vancouver – is terrific, catchy – and subtly anti-capitalist - pop-rock which trounces the “rock” work of Primal Scream. Even when the band slows down, for instance on “Splendid Isolation,” they deploy plenty of little sonic tactics and offhand structural mannerisms to keep one listening. “Don’t Confuse Sex With Love” is good junior school Faces, even having the glorious nerve to finish with a sample from the Big Bopper’s “Chantilly Lace” (hence inadvertently linking this record to entry #471).

“Womankind” is something more than satisfactory; a great, great and very generous pop song highly worthy of the aforementioned McCartney, beginning with a reminder of the stumbling ennui familiar to White Album and Abbey Road listeners before soaring towards what is really a heartbreaking catharsis. This should have been number one for months, and with its recurring leitmotif of “Everyday I love you more,” I wonder if the young Kaiser Chiefs were listening.

On the profoundly resigned “Sail Away,” I am simultaneously reminded of James Dean Bradfield and Glenn Tillbrook. Elsewhere, “I Was Not Wrong” does E-Street boogie almost as well as the sans-Bruce E-Street Band. The album is able to incorporate the frontman of It Bites and half of the Attractions (spot them if you can find them) without undue imbalance. Most astounding, however, is their shockingly apocalyptic, and climactic, demolition of “Tired Of Waiting For You,” which steadily atomises into impure noise.

Despite touring as support to both Van Halen and Bon Jovi, and despite a steady following, Little Angels never replicated the success of Jam – their fourth album, 1994’s A Little Of The Past, stopped at #20, and they split shortly thereafter before drifting into various interesting subsequent careers with periodic reunions. Nevertheless, Jam is a rather terrific pop album which should be coaxed from the cocoon of neglect, since in a kinder climate it should and would have been a multimillion-seller.

Posted by Marcello Carlin at 11:10