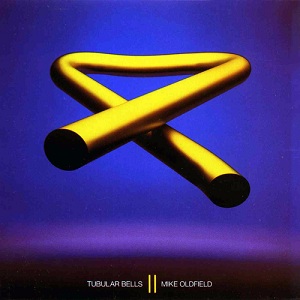 I did think of turning this post into a careful remix of my post concerning the original Tubular Bells, but the latter was typically too discursive to parallel usefully. Instead, I ponder on who might have bought this. I cannot imagine that anyone bought it who hadn’t already bought and loved the original, since any appreciation of this record is, by definition, umbilically linked to its predecessor. The seventies students in bedsits or squats had evolved, or mutated, into the middle-aged nineties affluents, but they still remembered the old times and craved a glossy photocopy of them.

They had been waiting nearly twenty years for a sequel, but Mike Oldfield had held out, largely because of ongoing disputes with Richard Branson at Virgin, in part because of what he felt were inadequate royalty rates and promotion of his work; the Sex Pistols, signed by Branson to Virgin in 1977, had immediately put paid to the likes of Oldfield and overnight, according to him, his label deemed him old-hat. Once out of his Virgin contract, Oldfield set about negotiating a new record deal with Rob Dickins at Warner Music UK, and at the same time finally set about reconstructing and updating his most famous record.

The irony here of course is that, via Enya (“We can steer, we can near, with Rob Dickins at the wheel”) and other New Age compatibles – including the very recent example of The Orb – Oldfield’s music had subtly slipped back into fashion. He did not wish to mimic the original Tubular Bells note-for-note – that would follow, with substantially less success, in 2003 – but rather viewed it as Satie did his Trois Gymnopédies; re-viewing the piece from a different angle.

The difference in this new angle was an emotional one. The original, Oldfield felt, came across as angry, depressed, rhythmically clunky and rather withdrawn music. He wanted the negatives to be turned into positives. To this end, he hired Trevor Horn to produce the record, though also recalled the original producer Tom Newman to assist. There were immediate and virulent disagreements between the two, since Horn wanted the instruments to be sequenced rather than being played by hand. Nonetheless Oldfield knew that Horn, as a former bass player, knew all about the importance of rhythm to this music and was keen to have the rhythmic factors of Tubular Bells tightened up; casting an eye in The Orb’s direction, he may also have been anxious for this to work as ambient dance music.

I would say that Tubular Bells II only really works if you are familiar with TB I. I am uncertain how effective it is as an album in its own right. How Oldfield approached the remodelling task was by means of drawing a huge wall chart and dividing the various parts of the original work into different-coloured sections, patiently reworking it one section at a time and being acutely careful not to come up with a carbon copy of the original.

Some parts of the sequel work better than others. Too often the memorable melodies (or riffs) of the original get submerged in amelodic drifting, backed by what are now very dated-sounding Fairlight tropes. The menace of the original has evaporated, and that was clearly intentional. But it does have its moments where one is pulled back to recollections of nearly twenty years before.

Vivian Stanshall had been hired to repeat his “Master of Ceremonies” role on what was now called “The Bell” but failed to turn up in the studio on the day of recording; Newman went round to Stanshall’s house to check whether he was OK, and discovered the great man sitting, blind drunk, in a bath filled with mud. They did eventually manage to coax Stanshall into the studio, some considerable time after the rest of the album has been recorded, and his below par, exhausted-sounding voiceover appears on one of the single remixes of the track (a separate mix features a commentary from Billy Connolly). But someone else was needed, after some deliberation on Oldfield’s part as to whether an MC was really required. The credit on the album sleeve goes to “A Strolling Player”; this is because the album artwork had already gone to print before Oldfield had made up his mind whom to use. He finally settled for Alan Rickman, who does a frivolously authoritative job and whose Shakespearean voice indeed works perfectly in this climactic context. Listening to the piece, you would never think that Christmas could ever be cancelled.

“Tattoo” – perhaps a reference to the fact that the world premiere performance of this reworking took place at Edinburgh Castle – is powered by a fine old bagpipe melody (the remake is generally major key, whereas the original was, more often than not, in the minor key) and the involvement of Susannah Melvoin on “Altered State,” a reworking of 1973’s “Piltdown Man” sequence, reminds us that at least one teenager in Minneapolis with a similar multi-instrumental facility had been paying attention back in the day, while the succession of cut-up voices counterpointing Oldfield’s growl (which is definitely angrier, or perhaps more triumphant, than his original one) and Horn’s presence as producer suggests that here was one road which led to the Art of Noise.

But where the original climaxed with a guess-what-this-enigma-variation-was rendition of the Sailor’s Hornpipe, the sequel ends with a banjo-plucking Oldfield speeding his way through a bluegrass workout. I am, however, glad Oldfield was in a much happier state of mind and being than he had been back in 1973, and although Tubular Bells II is only intermittently engaging, it bore a clear history which had evidently continued to resonate in the minds of a lot of solvent but worried followers. Then again, once you come up as part of a mutually dependent culture, it certainly does stay, I think, with you, and in you, for life.

I note, in passing, the pronounced pro-European colours of the album's cover.

Posted by Marcello Carlin at 12:17