The CULT: Pure Cult: For Rockers, Ravers, Lovers, And Sinners 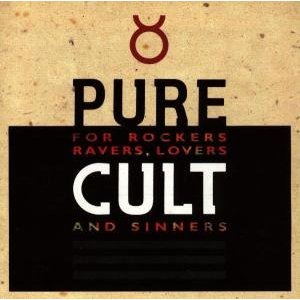 The Cult – or Ian Astbury and Billy Duffy, who basically are the core of The Cult - are rock’s equivalent to Peter Glaze. What I mean by this is that if you recall the ancient British children’s television series Crackerjack – which ended around the time “Spiritwalker” was first released – then you will remember Mr Glaze’s determinedly cornball vaudevillian antics. As Danny Baker subsequently pointed out, however, what Glaze and his various assistants – you cannot call Don Maclean or Rod McLennan “straight men,” since Glaze himself was supposed to be the straight man, the feed – were doing was not retro-nuevo recreation or sardonic, in-inverted-commas postmodernist pastiche. Glaze came directly from the British music hall tradition – for many years he had served as an understudy to the Crazy Gang – and, by God, he MEANT it and had the necessary, meticulously-honed skills to express it. This was, as Baker was at pains to emphasise, the genuine article; see also why the Goons worked so well, since they emerged from the exact same tradition and background. There was no point sending up Sellers or Milligan or Secombe; they were music hall.

That’s how it is with The Cult. I remember when Ian Astbury was interviewed in Melody Maker at the time of the release of their second album, Love, where he modestly proposed that, hey, you know, that Led Zeppelin, they were actually pretty damn good, weren’t they? In what was still the immediate post-punk period, this was considered by some tantamount to blasphemy.

But Astbury spent most of the seventies growing up as a teenager in Hamilton, Ontario, attending Glendale Secondary School and discovering Iggy, Bowie and the New York Dolls, before relocating to, of all places, Glasgow, where he went to see Apocalypse Now – I wonder if he was in the same audience as my father and myself – and the film’s use of “The End” by The Doors did something to him (many years later, of course, he became Jim Morrison in a briefly-reconstituted Doors line-up).

The point here is that Astbury never laboured under assumed notions of what it was like to be “cool” or “hip.” He took and accepted everything he absorbed at face value. He really didn’t give a toss whether or not it was cool to like Zeppelin in 1985 – the general consensus at the time was that it still wasn’t – but felt that somebody had to say it.

By 1980 he had moved to Liverpool, and then to Bradford, where he put together the much-admired Southern Death Cult. Then in 1983 he ran into guitarist Billy Duffy – a childhood friend of Johnny Marr who had also worked in a pre-Smiths punk band with Morrissey (Ed Banger and the Nosebleeds) – and promptly threw in his lot with him and formed a new band which the two called simply Death Cult. In 1984 the band’s name was simplified to “The Cult,” and here is where the story told on the Pure Cult compilation begins.

The early songs like “Spiritwalker” and “Go West” clearly arise out of a Gothic backdrop – for a few years The Cult were, perhaps misleadingly, labelled a Goth band – although Duffy’s guitar flange techniques, though obviously taking up from where John McGeoch had left off with the Banshees, were something new (Duffy used a Gretsch White Falcon, about the least fashionable guitar you could get at that time). “Resurrection Joe,” a non-album single from Christmas 1984 (erroneously spelt “Ressurection Joe” on early pressings), got lost in the immediate post-Band Aid rush but did not pass unnoticed by me, and remains a magnificent piece of work, clearly signalling a way out from the Goth cul-de-sac towards a wider rock-based future.

Then, in 1985, “She Sells Sanctuary” gave the band both aesthetic and commercial breakthroughs. A stalwart student disco floorfiller almost from the moment of its release, it works its magic via the simple device of Duffy essentially using all of his guitar effects pedals at once (and the stinging swipes of acoustic guitar underscoring the song’s central riff is also key to the record’s success). The attendant album, Love, saw the band manfully trying not to reproduce “Sanctuary,” although both “Rain” and “Revolution” are best viewed as Satie-like alternative perspectives on the same artifact.

Their third album was due to be called Peace but the band were dissatisfied with it and went to New York to ask Rick Rubin to remix it. Rubin recommended that the entire album be re-recorded. The band’s then-record label huffed and puffed over budgetary overspends, but it was clearly the right thing to do since in the interim since Love, Zeppelin and rock of their ilk had become cool again, mainly thanks to Rubin’s work with Run-DMC, the Beastie Boys and Slayer.

The album was retitled Electric, and everyone with ears flipped immediately. The appearance of “Love Removal Machine” in early 1987 was a firm declaration of principles. It was as if the window to the stuffy bedroom of rock had been thrust wide open for the first time in a decade and all the “forbidden” pleasures and thrills had been allowed to burst back in. It was an expression of aesthetic liberation. This went beyond Joey Tempest and Europe’s arch reproduction of cock rock mannerisms. This was COCK-A-DOODLE-DOO ROCK, designed to wake people UP. The band were shameless and blameless and if you do not agree that “Love Removal Machine” was the best and most thrilling pop single of 1987 – as a manifesto it is up there with the JAMMs’ “All You Need Is Love” – then, frankly, you are fooling yourselves. It threw down its glam gauntlet and offered post-punk a grin of pure fuck-you-ness. Leather trousers and all.

Other songs from that album, including “Lil’ Devil” and the storming “Wild Flower,” proved that “Machine” was no fluke – even their take on “Born To Be Wild” is bearable (because who else was doing it in 1987?). It broke them big, and their next album, 1989’s Sonic Temple, recorded in (where else?) Vancouver under the watchful eye of Bob Rock, was similarly entertaining – and, in the case of the tender and palpably heartfelt ballad, “Edie (Ciao Baby)” – more than simply entertaining. Tracks like “Fire Woman,” “Sun King” and “Sweet Soul Sister” possess an unanswerable bravado and confidence, and once again confirmed that Astbury had – and has – one of the greatest yells in rock. As a singer, as a performer, he takes us into his confidence and makes us empathise. He knows just as much as we do how great this music is. With all due respect, they were, at this point, making fellow Bob Rock clients Bon Jovi sound like the Sooty-Braden Showband.

Things were not quite so settled for the band as the nineties dawned; Oliver Stone reportedly offered Astbury first refusal at playing Morrison in The Doors, and Astbury turned him down, unhappy with how the man was being portrayed in that film (and I’m afraid that he was quite correct in doing so). Longtime bassist Jamie Stewart quit, wishing to spend more time with his family. And, as with so many other rock acts of this period, Nevermind was suddenly making The Cult’s life difficult (ironically the first song on Love had been entitled “Nirvana”). Moreover, Astbury and Duffy had by then basically fallen out and hardly communicated with each other in the studio. 1991’s Ceremony got good reviews but commercially was a disappointment, and looked very unhip next to what was emanating from Seattle (there were also serious issues arising from the cover, which depicted a Native American boy, leading to legal action). Nonetheless it contains some of the band’s best and least acknowledged work, including “Wild Hearted Son,” “Heart Of Soul” and the spectacular closer to Pure Cult, “Earth Mofo,” their finest four-and-three-quarter minutes, wherein they seem to summon up all of their hitherto suppressed rock demons and release it in an enormous cavalcade of riffs, rhythms, noises and, ultimately, Astbury’s repeated “fuck you”s, as in, we’ve resuscitated rock ‘n’ roll, fuck you, hipster.

Astbury and Duffy had low expectations of Pure Cult at the time; they didn’t believe it would do much business, so presumably were delighted when it went double-platinum in the UK. Certainly, listening to the album anew for this blog was a particularly cheering experience, which in my view indicates their brave purpose. I don’t think The Cult really sound anything like Zeppelin; nor do I agree with Robert Christgau most of the time. Yet I would suggest that they sound quite close to an unspoiled Yorkshire (via Manchester and Canada) version of Aerosmith, much as Aerosmith sound like a more acceptable (to American ears, at least) Bostonian variant of Slade. For a parallel, I would suggest another band from the north-east of England whose career ran absolutely parallel to The Cult, though pursued very different paths and approaches, and who spent 1992 cheerfully attempting to destroy the singles chart. The Wedding Present! Does everyone think that looks, or sounds, daft? Crackerjack!!!!

(Author’s Note: the next Then Play Long update will appear on Tuesday 26 January. Monday is my birthday, and I will have better things to do then than writing a blog!)

Posted by Marcello Carlin at 11:13