Paul YOUNG: From Time To Time – The Singles Collection 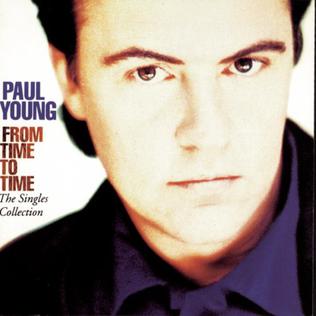 When writing about his first two albums, I recast Paul Young as an art-rocker crouching under the guise of a soul singer. The selections on this compilation from No Parlez and The Secret Of Association remain compelling, although it is saddening how little his “I’m Gonna Tear Your Playhouse Down,” with its political subtext, has dated.

Much of the success of these records was due to the inspired production work – as though reimagining pop a generation ahead – of Laurie Latham. 1986’s Between Two Fires was a subtly persuasive work, perhaps too much so for its own commercial good, and its producer Hugh Padgham was no Latham; neither “Wonderland” nor “Some People” really convinces, the latter sounding in places akin to It Bites (although it was admittedly the case that in late 1986 several UK chart regulars suddenly found the going tough; pop had moved on quickly and caught many of its more seasoned practitioners napping).

From 1990’s Other Voices – various producers and generally unfocused – there are two somewhat underwhelming cover versions. Young’s “Oh Girl” is reasonable, but if you’re going to claim to be “a helpless man,” you’d better have the voice of Eugene Record to prove it. Meanwhile, I don’t really see the point of his “Softly Whispering I Love You” which is far too minimalist and polite, especially when set against the hysterical maximalism of the Congregation original (another by-product of the semi-liminal 1971 period when anything could become a hit – think prototype Mumsnet choir irrupted by a hairy Glaswegian who fondly imagines he is Levi Stubbs. It’s terrific!)

There are four new songs, which suggest that a full album of duets might have been the way forward at that point. “Senza Una Donna,” a duet with Zucchero, was a major hit single, a melancholy modernist and fundamentally good-humoured (though lyrically now extremely unpalatable) Rat Pack sorrows-drowning meditation. Young makes a decent stab at “Don’t Dream It’s Over,” again with that political undertow – he had performed the song at the Nelson Mandela 70th Birthday Tribute concert at Wembley in 1988 – where he is helped enormously by co-lead singer Paul Carrack. On “Both Sides Now” he is rather outsung by Clannad’s Máire Brennan (in his defence, the recording was made in the middle of a snow blizzard in Dublin, and Young was suffering from a bout of ‘flu at the time); this reading is good, indeed far too good for the now unwatchable alleged comedy which it helped to soundtrack (Switch, starring Ellen Barkin). However, the clearest pointer to Young’s musical future (the pedal steel on “Everything Must Change” notwithstanding) is to be found on “I’m Only Foolin’ Myself,” a routine R&B plodder co-piloted with Dan Hartman, but bearing an arrangement featuring mandolin and accordion. One year later, Young formed the Tex-Mex band Los Pacaminos, which has intermittently continued until this day. One assumes that he has remained happy.

Posted by Marcello Carlin at 09:47