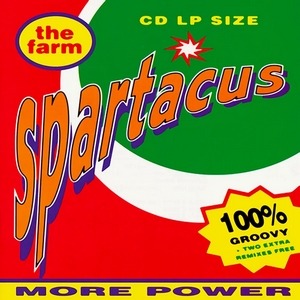 (Author’s Note: The CD edition is appended by two Terry Farley/Pete Heller remixes of “Higher And Higher” and “Very Emotional.”)

(Albie Kinsella, in the Cracker episode “To Be A Somebody”)

Some may think it odd that, of all the groups of this period, it is The Farm who appear in this tale rather than Happy Mondays or the Stone Roses. One may nod at the promotional budgets of major record labels in terms of making that appearance happen. But when one listens to Spartacus, it is clear that the whole Madchester/baggy/indie dance thing is something of a red herring here. This record tells a story, states a case, which could have sent it to mass popularity even one year previously.

It is a Liverpool thing. Peter Hooton put The Farm together in 1983 and has been the band’s mainstay ever since. He is a good, intelligent and perhaps noble man who has achieved many things which are important to his community and to Britain as a whole. The collectivism of The Farm is important, since Hooton has always viewed the band as a mouthpiece articulating the feelings of a greater society. Spartacus was their first album in eight erratic and sometimes tragic years, and bears the aura of a statement bursting to be made. “Tragic” because their original drummer, Andy McVann, was killed in 1986 in a car crash during a police chase; the album is dedicated to his parents.

Spartacus was largely produced by Graham McPherson, a.k.a. Suggs of Madness, a long-time friend of the band who had spent some of his very early years growing up in Liverpool. Indeed, Suggs produced their very first single, 1984’s “Hearts And Minds.” Then it was a typically early eighties mix of Joy Division doom, 2-Tone ska and Wah! angst. Re-recorded as the opening track of the album, again with Suggs producing, the song is possibly more disturbing, with floating dark clouds of synthesisers, some Big Audio Dynamite-type video sample inserts (including Taxi Driver) and genuine Wah! angst in the form of Pete Wylie himself, unavoidable on backing vocals. Then as now, however, Hooton looks merciless neoliberal capitalism in the eye and turns away from it, urging others to come with him.

“How Long” ostensibly concerns itself with the fall of the Berlin Wall in 1989, and the example it should have set to others to break free likewise, but there is the unspoken dread of an undertow of something else that happened more locally in the same year. As a folk song – and what else can these ten songs be but folk songs? – it is direct and effective. As a lyricist, Hooton is never going to be compared to W. H. Auden, but just because he says things simply doesn’t mean that he has nothing to say; in many important ways, he has everything to say. “Sweet Inspiration” is a love song which appears to be addressed to Hooton’s people, rather than a single lover.

Suggs doesn’t really produce the album like a dance record, and the understated nature of that production works in the record’s favour, rather than thrusting instantly dated things into the listener’s face (as, for example, Jesus Jones did). Their first big hit, “Groovy Train,” was routinely dismissed at the time as a baggy cash-in, but if you listen to it properly you will find a rather savage attack on fashion victims and societal sellouts. Keith Mullin’s delightful lead guitar line, slightly reminiscent of Nigerian hi-life music, dovetails in perfect unison with Paula David’s backing vocal; a very fine pop record.

The dominant mood of Spartacus is one of bruised optimism, and through songs like “Higher And Higher” and especially “Don’t Let Me Down” – the latter possibly a titular nod to another Liverpool band of old – we are stirred towards hope and action. Pace Cornelius Cardew, this is the real “People’s Music”; “Don’t Let Me Down” bears the profoundly unironic refrain of “Stand up and fight and be counted” – and, thanks to the utter conviction of Hooton’s delivery, we believe the message. “Family Of Man,” a double A-side to the band’s 1990 Monkees variant “Stepping Stone” (the latter meaningfully not included on the album), bears the subtitle “join the Family of Man Mr Policeman” and is an invitation to participate, to become as one with the greater community they profess to protect. “Very Emotional” seems to be another tribute to his fans and is imbued with genuine warmth and unstoppable dynamism.

“All Together Now,” a fusion of the lyrics to the band’s 1983 song “No Man’s Land” and the music of Pachelbel's Canon, was almost the 1990 Christmas number one, and again features Pete Wylie – the exact cross between Bruce Springsteen and Jimmy Tarbuck – howling and crying for his world, their people. The seasonal truce in the WW1 trenches is only the backdrop to a profounder pain – “The same old story again/All those tears shed in vain/Nothing learnt and nothing gained/Only hope remains”…

…because the song, and much of the album, is really about Hillsborough, then still recent, raw in memory and unendurable in pain, and, as the character of Albie Kinsella asserts, one of the probable triggers for much of the pain now being endured in this country as a whole. Hillsborough, here, is the new No Man’s Land.illHi

To understand this feeling more completely, I draw back to “Tell The Story,” the only song on the album not produced by Suggs – it was in fact produced by Paul Heaton and certainly bears Beautiful South traces. It is a lullaby to Liverpool, a mourning in certain aspects, but also acts as a benign wake-up call, to make this city and its people live again. Peter Hooton has been a major campaigner for post-Hillsborough justice, helping to put together the Justice Collective’s reading of “He Ain’t Heavy, He’s My Brother,” the Christmas number one of 2012 and an absolute vindication of everything towards which Spartacus affably demands that we, the workers, should be working and helping to enable. It is, as I said, a Liverpool thing, with none of the nonchalant arrogance one sometimes gets from the Mancunian performers of the period – not to mention one particular Manchester group who, three years hence, will prosper on a parallel level. The message here, however, is and remains: “I am Peter Hooton,” the people stand up and proclaim, “I am Liverpool, and I cannot die.”

(with due acknowledgements to Steve Grimes, the band’s rhythm guitarist and co-writer of these ten songs)

Posted by Marcello Carlin at 10:56