Paul YOUNG: The Secret Of Association 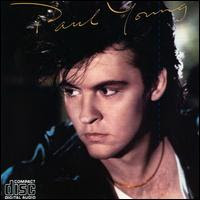 Out of action for most of 1984 due to vocal cord trouble, Paul Young seems to have been determined to slow down and calm down for most of his second album. But not for all of it. The trailer single, a cover of Ann Peebles’ “I’m Gonna Tear Your Playhouse Down” – though Young’s performance sounds as though it is taking its lead from Graham Parker’s reading on Stick It Out – was the last to feature The Fabulous Wealthy Tarts prominently (“PUSH, PUSH!”) and was, if anything, more extreme even than anything on No Parlez; when Young complains that “you make our lives a stress and strain/Using the power ploy,” you wonder whom he has in mind; a cheating lover, or Mrs Thatcher? Laurie Latham spares no extremities; there are Art of Noise jackhammer beats, Fairlight thunderbolts, Gothic organ and a guitar solo as meticulously unhinged as anything on Bad Moon Rising (two guitarists are credited on the album – Steve Bolton, once of Atomic Rooster, and John Turnbull, who played on the Get Carter soundtrack – so I’m not sure who plays what, but here and elsewhere he/they is/are as extreme as Thurston Moore or Lee Ranaldo).

There are a few other uptempo songs on Association – the opening (and presumably symbolic, as a warning to record buyers expecting No Parlez II) “Bite The Hand That Feeds” with car brake squeals and synthesised Mariachi trumpets, which was a cover of a song by Orange County surf/punk band Agent Orange; “Hot Fun,” which appears to send up the No Jacket Required school of loud optimism – his voice doesn’t really convince you that he is having any fun, and Big Jimmy Paterson’s grumpy staccato trombone solo confirms the suspicion (we are only a few months away from the noticeably less circumspect Don’t Stand Me Down) – and the complex “Tomb Of Memories,” part “Seven Rooms Of Gloom,” part Northern Soul and part “Love’s Unkind,” with Squeeze’s Difford and Tilbrook dropping by to rub the singer’s face in it (“THE HURT! IT DON’T STOP!!”).

But otherwise the tempo is slow – and occasionally non-existent – and the mood superficially reflective. But although Association is less showy a record than Parlez, I think that it is a considerably deeper one. The prevalent subject matter is that 1984-5 favourite, lovers falling out and/or misreading each other. “Every Time You Go Away” may sound like everyone’s favourite romantic serenade, but is actually a rather bleak song (as the LP version, bookended by abstract electronic whorls, emphasises) whose protagonist is a shit but is begging her not to go, or to keep going (written by Daryl Hall, it is a tribute to Young that he sounds remarkably like Hall here, yet still remains unmistakably himself). In the context of rather menacing songs like “Standing On The Edge” – written by long-time friend and collaborator Drew Barfield – which paints a pitiless and sometimes contemptuous picture of someone who opts for unhappy safety rather than own up to herself, and to the singer, that the heart knows better, or “This Means Anything” which, like “Tomb Of Memories,” wonders what words of love are really worth (the Fairlit string section, alternating with a hesitant and shortlived percussive break – “’I’ll be with you again’/Words without credence/Oh” – it is as if the Colin Blunstone of One Year has been bruised one time too many), it does anything but reassure.

There is also “Everything Must Change,” a deserved Christmas top ten hit, with the Fabulous Wealthy Tarts replaced by a sturdy male backing vocal trio (which mutated out of the Olympic Runners and eventually became the foundation of Londonbeat). Here Young owns up to his cussed, love-destroying stubbornness, knowing he’s not perfect but still gasping for air and at life. The moment where most of the instruments drop out and he offers a defeated, close-miked “Awwww, let me know” is shiver-inducing, as is his prematurely exhausted plea of “Please let me be right for once!” The occasional oldie radio plays also omit the crucial middle section where all the voices break down into a semi-free call-and-response gospel routine and the music suddenly, if momentarily, becomes harsher. The whole is so compelling that one notices only belatedly that the incongruous but entirely fitting pedal steel guitar of BJ Cole has been present all along (cf. James Carr’s “Tell Me” and Young’s thanks to Elvis Costello in the sleeve credits; this is a very comparable study of emotional nakedness).

But there are also two anti-war songs; it had been scarcely three years since the Falklands, but the Irish question had not been resolved (think of the faint ley line between Young’s “I can’t go on sayin’ the same thing” on “Every Time” and Kevin Rowland’s “It all sounded the same”/”What do you think about BEL-FAST?” interjections on “One Of Those Things”). Of these, “One Step Forward” is the more immediately convincing, finding Young as the rookie soldier on duty – it could be anywhere – carrying a rifle and not being entirely sure why he is doing so. I’m not sure his “Soldier’s Things” entirely comes off. The Tom Waits original is an exquisitely painful miniature; the bare inventory drained of life and point carries its own inherent poignancy, and Waits never really has to raise his voice – whereas Young tries to turn it into a six-minute Marvin Gaye epic, with somewhat overcooked results.

Better are the chilling final two songs. “I Was In Chains” sounds like 18th-century folk music but was actually composed by Gavin Sutherland, the author of “Sailing” – the original appears on the Sutherland Brothers’ more or less eponymous 1972 debut album – but this tale finds Young at sea, not heading for freedom, but bound in chains, as a convict being transported to Australia for crimes which, the song implies, may be rather heinous but are not really specified. Although Graham Peskett’s violin suggests a comforting update of early Rod Stewart, Mark Feltham’s bass harmonica is not at all comforting, and the abrupt eruption of atonal guitar (Bolton and/or Turnbull really rank/s with what Keith Rowe does on Amalgam’s Wipe Out) wrongfoots the incautious listener; the ending, with harsh backward percussion and electronic figures and indecipherable vocal shouts, suggests being yanked violently out of a dream.

The record ends, bleakly (in the UK, at least; the American edition ends with “I Was In Chains,” which has its own logic) with a Billy Bragg song, which Young immediately sings in his own accent. Accompanied by nothing but Ian Kewley’s sombre, wavy Fairlight – Boards Of Canada ahoy? – Young sings the song of silent, knowing betrayal (don’t bother to wake me up before you go-go; don’t even try to be good to me) as though drained of every last atom of hope, as if this is Mark Eitzel’s “Last Harbour,” as though nothing lies beyond this horizon but dark, dark space. The Secret Of Association, despite going double platinum, is almost never seen in charity shops (and certainly not on CD, not even in actual record shops), and I wonder if it told truths that the 600,000 or so British people who bought it didn’t want to know about, or were keen to hide in the attic tomb of their own misguided memories.
Posted by Marcello Carlin at 16:04