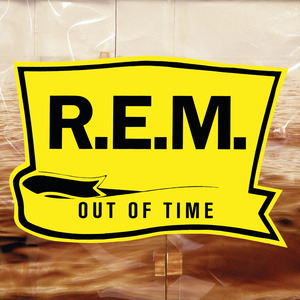 I am jabbering aimlessly to myself. I have sung every song and recited every poem I know. Movies that I have visually memorized, Diner for example, have played from beginning to end out here in the whistling expanse of the spacious Castilian Gigantoplex. A few weeks ago the wind bore only the squeal of a phantom car. That was then; today it’s a hallucinatory open house. I hear singing in the wind: four-part harmonies of Renaissance madrigals, shopping mall renditions of Christmas carols, all the top-forty hits fried onto my synapses before I left (the opening mandolin riff of REM’s ‘Losing My Religion’ perversely floats up every ten minutes like a human-rights violation).”

The first question is obviously: why the title? Out Of Time could mean several things; the world is running out of time, or the record exists out of its or any time, untethered to any trends or expectations. Perhaps some who witnessed the Green tour were expecting a circus apocalypse.

Given that the album begins with Michael Stipe announcing that “the world is collapsing,” you could expect that title to mean the first thing. Once you have reached the end of “Me In Honey,” it is clear that the second meaning is also applicable.

But the truth is more prosaic; the deadline for the album’s release was looming and R.E.M. had still not thought of a name for it, even though the sleeve design had been done and was ready to be printed. The record was mixed at Paisley Park Studios, and it was one of the secretaries there who inspired its title. Upon being told that “The record is about memory and time and love,” she responded with the concept of In Time. Mike Mills immediately responded with Out Of Time, and that was the name it received – the band had literally run out of time to think of a name for the record.

The album, if you bought it on LP or (as I did) cassette, came bearing two sides, a “Time Side” and a “Memory Side.” It was this duality which distinguished the band in ways that had not really come before. Listening to the record almost thirty years later, it is very evident how crucial this duality was to securing the mass market’s patient embrace of R.E.M.

“Patient” because there is only one obvious single on Out Of Time, and it was not the album’s lead single. In addition, the band, exhausted from touring, elected not to do any more touring to promote the record – Peter Buck said at the time that he never wanted to look at an electric guitar again, hence his decision to switch to mandolin. And yet the patience paid off; Out Of Time became the group’s first real “Gigantoplex” of an album, and probably the bravest aesthetic sideways step by any major rock band since The Unforgettable Fire.

But it was the seemingly unassuming “Losing My Religion,” the most famous mandolin rock song since “Maggie May,” which slowly won people over. Why? It doesn’t appear to be about much of anything, yet paradoxically could be interpreted as being about everything. The expression “losing my religion” is familiar in the Southern States – this band and especially this record cannot help but have Georgia on their minds – as meaning losing one’s temper or civility, or simply feeling frustrated and/or desperate. Stipe has described the lyric as a study in obsession, a different angle on unrequited love.

The song began with a bassline of Mike Mills, who was trying hard not to sound like John McVie (who had inspired said bassline). Since there was no audible “middle range” to his bass playing, touring band member Peter Holsapple, formerly of the dB’s, was invited to contribute extra guitar to the song, and indeed Holsapple turned out to be a virtual honorary fifth member of the band throughout the album, with many useful contributions.

However, the song conveys the impression of being much more than a pining for a woman across a crowded room. “Life is bigger than you,” as the song announces itself. And people caught on to a more generalised reading of refrains such as “I thought that I heard you laughing” and the resigned finale of “That was just a dream…dream,” as though pursuing fled ghosts of an imagined purple past. Thirtysomethings finding themselves in the nineties and wondering who and where the hell everybody was. Initially circulated to and promoted on college radio, it soon crossed over to Top 40 radio, and the band have never had a bigger hit in their homeland. As with “Unfinished Sympathy” and “Smells Like Teen Spirit,” it seemed, not just to fill an existing gap, but to persuade people that a new gap had just been created. Its timing was perfection. The song appears to make no impression on you, and you find, a few minutes later, that you have somehow been imbued with the aura of that song.

The ”Time Side” is my favourite of the two sides. The opening “Radio Song” puts the parochial whingeing of “Panic” into proper perspective; the lamenting which the song describes is universal; is she crying at the radio or despite it? The song’s structural use of staccatos and pauses is slightly reminiscent of “Glass Onion” – and many people thought, wait, they’re not touring any more and they’re expanding their vision, giving us radical suggestions with every new song; are these the new B**tl*s? – but sharper focus is attained by the inspired use of guest (and, I think, deliberately banal) rapper KRS-One, whose appearance was fought for by the band (Stipe was a big fan of his work) against the protests of MTV and much American radio.

The overall mood of this side is certainly expansive; “Near Wild Heaven” is co-written and chiefly sung by Mills – the first time both had happened on an R.E.M. album – and is superb and hopeful pop music. Yet it also retracts when necessary; “Low” was the song which persuaded SPIN magazine to put the band on their cover (the lead interview/article was entitled “Going For Baroque”) and – well, how can I put it? – plays like a reversal of Scott Walker’s “Boy Child”; the naked stillness is still present (“Barefoot naked/I can see your lines/It doesn’t bother me”) but the singer is resigned to things being, if not less than perfect, then…just having moved on to another phase. In other words, it’s actually a song of hope and acceptance (“I skipped the part about love/It seems so silly and low”). Prince, with a little more courage of his own convictions, could have conceived and recorded it. Despite the creeping tentacles of the song’s music – which may lead us, later in the year, to a song entitled “Something In The Way” - Stipe is not on a terminal beach; he is, perversely (or not), contented with the state of things.

This side concludes with the wordless “Endgame,” the most beautiful piece of music R.E.M. created. Stipe heard the music – the rule of thumb with Out Of Time was that Buck, Mills and Bill Berry came up with the music, to which Stipe then had to think of and add words – and knew that this song needed no words. The siren song of a flügelhorn, played by one Cecil Welch, seeps through like maple syrup decorating the pancake of a new and brighter morning. We seem to have reached the limits of the earth with this song’s timbre, and I think of the eternal light, the revolving aeroplane that used to be on top of that factory on Western Avenue, the road leading out of London, and the Californian elephant in this front room – “Near Wild Heaven” also suggests it, from a different perspective – sinc this could have flowed straight from SMiLE (hear Dennis Wilson’s “Mexico,” from the Pacific Ocean Blue sessions, and tell me I’m misguided).

At their profoundest (which is free to overlap with their shallowness; it is in their nature), R.E.M. can make the listener wish to aspire to the sightline of gods.

The “Memory Side” is a lot more straightforward but provides the necessary balancing warmth, which isn’t always evident on their consequent series of number one albums. “Shiny Happy People” is pop and proud of it – and the appearance of Kate Pierson indicates a final and long-awaited union between the two great pop bands of Athens, Georgia (OK - three if you count Pylon, but I’ll be getting back to the latter in due course). One hardly notices that the lyric is a less-than-literal translation of the propaganda espoused by the Chinese government at the time of the Tiananmen Square massacre. The waltz orchestra cuts into the song like an interrupted radio broadcast (major acknowledgments, by the way, to Mark Bingham, whose string arrangements throughout this album are never less than inspired and necessary). Among the Georgians dancing with the band in the song’s video is Alton Brown, a future chef of renown, who had previously acted as director of photography for the video to “The One I Love.”

“Belong” has Stipe’s first recorded narrative recital of a lyric; once again, the world is collapsing, or at least the world of the woman who is the song’s protagonist, but she sees the collapse as an opportunity to escape, to break free, to change. “Half A World Away” is melancholy but, again, not drained of optimism; its music is warm and welcoming. We are not with Harold Biffen and his bottles of pills on Putney Heath at dusk – far from it. “Texarkana” stares at the universe of stars and is moved and energised by what it sees. “Country Feedback” is mostly ad-libbed by Stipe, and could serve as a sequel to “World Leader Pretend” with its subject recast from paranoid dictator to rootless would-be lover. Again and again the singer nibbles on “It’s crazy what you could have had,” as though scolding the world.

The side, and therefore the album, ends with the upbeat – I will avoid the adjective “anthemic” for now – “Me In Honey,” a fully-fledged duet with Kate Pierson and a direct response to the 10,000 Maniacs song “Eat For Two”; both are songs about pregnancy, and respectively depict the male and female response to the latter (Natalie Merchant and Stipe were lovers for a time, and almost uniquely in rock have remained close friends since). “Me In Honey” thrives on a bass-led drone – Joy Division! – which the group ride triumphantly. His perspective alters from mild outrage (“What [love is] doing to me”) to the dawning realisation that what is going to happen is part of him (“What about me?”). A new world will come into existence regardless.

“The distant clouds have grumbled a few times. I try not to listen to what they have to say.”

“Looking at someone through their creative output is a blurred vision, but it really can be a very beautiful one.”

Posted by Marcello Carlin at 11:24