Céline DION: Falling Into You 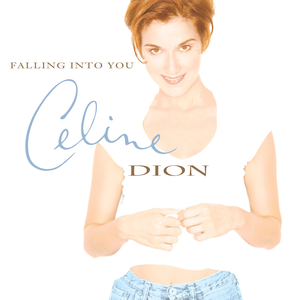 (*on European and Australian CD editions only)

If Elvis had lived, he'd have recognised Céline Dion as his true heir. Just as Elvis, after he was presented with "If I Can Dream," swore that never again would he sing a song in which he did not thoroughly believe, there is absolutely no face or pretence about Mme Dion, no diplomatic screen to block or dilute her intimate intensity.

Her approach is almost the diametric opposite of Mariah Carey's. Where Daydream saw her strive to flee the towering shadow of her husband - shades of Susan Alexander assembling jigsaws at Xanadu - Céline wants to you to know that she is blissfully happy, that she means that happiness, and that she wants no more than to hold onto that happiness for as long as possible. Listen to the mutated doo-wop of "I Love You," the way in which she plays vocal tennis with her backing singers ("And maybe I, maybe you!, maybe you!, maybe you!"), the birthday party exhilaration which floods like the centre of a stick of Blackpool rock down and along her "River Deep, Mountain High."

Observe the winking pop-reggae bounce of "Make You Happy" or the upbeat pink lollipop of "Declaration Of Love," so reminiscent of early Madonna, before the world and Madonna did things to her ("so right you taste my sweeeetness on your lips!," "I'll make it better than you ever dreeeeeeeamed!!"). This is the voice of a woman who has got everything, and everyone, she needs to feel fulfilled, so if her "Natural Woman" doesn't quite match up to Aretha's authority (but what does?) or Carole King's routed fragility, it is nevertheless a powerful declaration of love principles.

Yet, as in all good stories, there abide doubt and dread. "Falling Into You" is a mysterious float, possibly inspired in part by "In The Air Tonight" but replacing Collins' ingrained paranoia with a lucid litheness, a blue absence of weight or depth which really doesn't place the song and its arrangement far from shoegazing. Within the song's fibres, carefully policed by guest percussionist Sheila E., Céline whispers that "while you sleep, I will miss you." The song had been recorded the year before by the Argentinian singer Marie-Claire D'Ubaldo; it is a complex song, with plenty of half-tones (pace Brecht), and initially the singer felt the arrangement was a little too forward and drowning out the song's core. She suggested some modifications to help bring out the song's emotions more readily, all of which were happily accepted by co-writers and co-producers Rick Nowels and Billy Steinberg, and discovered, perhaps to her own surprise, that she could maintain a high level of control over her music.

Similarly there is a pent-up desperation about "Seduce Me," co-written and co-produced by Dan Hill of "Sometimes When We Touch," and its harmonic parallelogram and guitar commentary, let alone the soaring, not-quite-of-this-world vocal, would not be out of place on side two of the Cocteau Twins' Treasure.

Where needed, she will rock, and Aldo Nova's triptych of songs ("Dreamin' Of You," "I Love You," "Your Light") ensures that she does, as well as demonstrating a pleasing sense of humour in places; in "Your Light" her voice at times sounds like Axl Rose.

But there is also a deep well of impermanence. Diane Warren apparently wrote "Because You Loved Me" with her father in mind, since he helped get her started with music when she was still a child, buying her a 12-string guitar on which to write songs and a metal shed in which she could practise doing so, as well as taking her to various music auditions; I am not quite clear whether David Warren was still alive at the time of the song's conception, but its "Wind Beneath My Wings" homilies are undercut by the rather sinister use of the past tense ("loved") which I am sure was intended. I have no doubt that, for her part, Céline was singing the song with René in mind. As I say, there is nothing in Céline's songs that she does not believe.

We know from "I Don't Know" - one of three revisited songs from her 1995 French language album D'eux (the others being "If That's What It Takes" and "Fly") - how starkly cold and bereft she would be were her love ever to disappear (she piles on the rhetorical "I don't know"s like a calmly frantic poker player, constantly upping the stakes), but her "All By Myself" set new standards for pop laments.

Reaching back to the original, it is odd how power pop, for all its alleged purity and perfection, never really became popular. Myself, I think it’s the charts’ loss, but the fact remains that when most people think of Alex Chilton they think of “The Letter” rather than Sister Lovers, to which “All By Myself” makes an unlikely companion. The song also reminds us of the age-old tradition of writing pop songs based on classical pieces; Barry Manilow had a Billboard top ten hit with his Chopin adaptation “Could It Be Magic” and then it was the turn of Rachmaninoff.

Again it is instructive to listen to the full seven-minute-plus album version of “All By Myself” since the long piano interlude in the song’s middle was actually the first thing that came to Eric Carmen’s mind. Working backwards, he then figured that the second movement of Rachmaninoff’s Piano Concerto No. 2 in C minor – “Adagio sostenuto,” no less – would form a good basis for the song’s verses, while the chorus was informed by, but did not slavishly mimic, “Let’s Pretend,” a song which he had written for his old band the Raspberries in 1972.