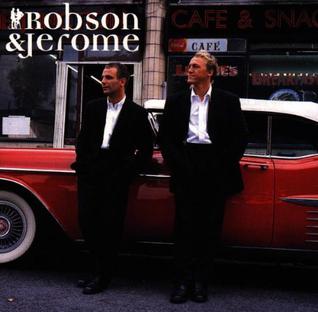 As we end this superficially remarkable year of 1995, we are forced to face some rather inconvenient truths. One is that, despite being comfortably outperformed over subsequent years by (What's The Story) Morning Glory?, this was the year's biggest-selling album within the boundaries of that year alone. In his book The Creation Records Story: My Magpie Eyes Are Hungry For The Prize, the late David Cavanagh refers to the single of "Wonderwall" being kept off number one by the double-sided "I Believe" and "Up And The Roof," performed by a couple of reluctant television actors whose appeal, says Cavanagh, broached a middle-aged female demographic which even Oasis couldn't reach.

Nor, for that matter, could The Beatles. Their Anthology 1 collection, complete with a rebooted Lennon demo fragment which had been cast as "the new Beatles single,"  had been designed as the number one to crown or climax that Britpop year. It was kept at number two by Robson & Jerome. Perhaps that was as much of a humiliation to some as "Release Me" holding "Penny Lane" and "Strawberry Fields Forever" off the top - even though the records of Engelbert and Robson & Jerome were largely bought by the same people.

Interestingly, Robson & Jerome and Anthology 1 have one song in common; "This Boy," originally the B-side of "I Want To Hold Your Hand" and one of the band's many attempts at the time to convey their underlying wholesomeness to their fans' parents. The difference is that The Beatles travelled beyond "This Boy," whereas this collection, or at least one of the people behind it, would prefer you to believe that this is where they end - lovable cuddly moptops who never met Dylan, never took drugs, never went weird.

It was clearly part of the overall plan by the A&R man at RCA, an ambitious fellow named Simon Cowell, to recast the history of popular music such that "rock" never happened. Cowell it was who watched the episode of the ITV drama Soldier Soldier, where Robson Green and slight Patrick Allen-lookalike Jerome Flynn deputised for an AWOL wedding reception band at the last minute; billing themselves sardonically, and almost apologetically, as "the Unrighteous Brothers," they launched into "Unchained Melody" and, because this is television, gradually won the audience over.

The ITV switchboard was bombarded with queries as to where a record of that "Unchained Melody" could be obtained. Cowell immediately saw the giant commercial potential and spent four months trying to persuade the two actors to sign a recording contract. They were highly reluctant to do so; at one point Robson Green even threatened legal action to stop what he perceived as harassment. But eventually, and probably with the success of Jimmy Nail in Crocodile Shoes fresh in their minds, they agreed to give it a go. Mike Stock and Matt Aitken (but, significantly, not Pete Waterman) produced a single of "Unchained" and "White Cliffs Of Dover."

The single was an immediate and immense success, staying at number one for seven weeks, famously keeping, amongst other singles, "Common People" at number two, and outselling every other single released in Britain during the nineties with the exception of "Candle In The Wind 1997." Its success is easy to understand; its release coincided, I am certain on purpose, with the fiftieth anniversary of VE Day, and it touched some very raw nerves in that substantial majority of the British public who didn't give a damn about being cool, or hip, or about much of anything after around 1954.

Watching the videos for the songs makes things even clearer. In "Unchained," the two performers take an ancient, monochrome stage in front of an elderly and sceptical 1940s audience. They fumble with their microphones and that provokes laughter; the audience think they are a comedy duo. But then they sing the song, as seriously as they can muster, and we are taken through a transposed tableau of various forties film scenarios, quite deliberately organised (as is the musical arrangement, with its Pavlovian climactic synthesised bells) to provoke memories beyond the reach of pain. As the song ends, the duo fade into colour and, with the lights up, see that the auditorium is empty; they have been playing to ghosts.

Yet this is not a menu of straightforward nostalgia. The video for "White Cliffs" commences with some emotional bombing footage from the Blitz - the wound which Britain does not want to heal - but, halfway through, both song and video take a somewhat unexpected left turn. Over an increasingly intense refrain of "just you wait and see," we see footage of Martin Luther King intoning those four words, of the freed Terry Waite, the freed Mandela and the demolished Berlin Wall, before zooming out on a picture of the Earth, floating in space. The message is that cosy war nostalgia is not enough - we have to make this peace work and last beyond our memories. It is a lesson more people should clearly have taken to heart.

Both Green and Flynn are ardent socialists, of my (and Jarvis Cocker's) generation - they are, in delivery and stance, just a hair's breath away from being indiepop - and in their various videos they are usually agreeably approachable and self-deprecating, as though fully aware of the absurdity of the enterprise, yet still wishing somehow to pierce that deep blue wall of absurdity. Hence the video for "I Believe," which sees them onstage in a semi-derelict working men's club, wearing singularly ill-fitting gold lamé jackets (the fate which Martin Fry's Worried Man endeavours to avoid?) and wondering out loud if they'd ever seen so many dead people gathered together in one place. But then they sing the song, which once served as a Korean War beacon, and somehow the crowd stir, and are, almost despite themselves, moved. A gospel choir inexplicably materialises briefly on the stage, but perhaps they too are ghosts. We, the audience, are being dared not to believe (for an interesting comparison, see the climax of Mike and Kate Westbrook's short television film from 1983, Hotel Amigo).

Hence there is something more intriguing at work here, perhaps as much of an intrigue as TPL 1995 has to offer. This is not to say that the album is a particularly good one. The voices are efficient but indie-weedy - at times the record comes across as a C86 Plays The Big Hits exercise (or perhaps one of those Embassy cheapo compilations trying its best to be Peter and Gordon - whose 1965 recording of "True Love Ways" is the secret ancestor of all of this - or The Bachelors). The musical backing is, shall we say, functional; every expense has obviously been spared. The enterprise is not up to the emotional bipolarity required by such songs as "The Sun Ain't Gonna Shine Any More" or "If I Can Dream." Not everything here is obvious; "I'll Come Running" is a seldom-heard Sam Cooke song, "Little Latin Lupe Lu," if not exactly the Righteous Brothers, let alone Mitch Ryder and the Detroit Wheels, comes as an askew nod to the ideations Rob Fleming harbours throughout the then year-old High Fidelity, and "Love You Forever" was a cover of a song originally performed by a Bristol-based girl group called The Shrinking Violets, who turned up at the studio one morning to audition for Cowell, who in turn invited them to contribute backing vocals to the album. One of their members was Anna Jacobs, now best known as an artist and designer (Anna Jacobs Design).

The duo perhaps cut deepest on the folk songs older than any of us. "Danny Boy" is an unexpectedly sombre album closer, with its intimations of war and mortality, and is handled as sensitively as the singers can handle it. I noted the YouTube comments about this version being played at the funerals of grandparents. And then there is the weightless drone of "Amazing Grace," the square root of so much pop, sung seemingly on a forgotten Tyneside doorstep prior to demolition - a folk song, for common people, people who, in 1995, were hurting, needing reassurance. Robson & Jerome is not by any means a great album; I concur with Tom Ewing's conclusion that, after the war ended, television was always going to end up a far bigger societal catalyst to this country than pop. But its message hit so many otherwise forlorn mid-nineties guts that it cannot be smugly dismissed. Up on the roof, you are away from the pain and rage - but you can still see everything.

Posted by Marcello Carlin at 10:32