QUEEN: Made In Heaven 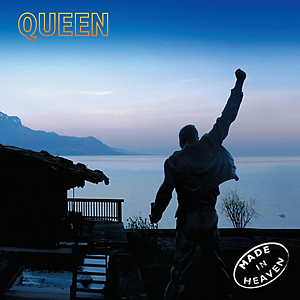 Want further confirmation that all rock critics stink? I just looked at some NME album reviews from 1973, posted by Rob Chapman on Twitter (via Daniel Ruggero on Facebook), which included ignorant and borderline-homophobic putdowns of the first albums by Cockney Rebel, Jobriath and Queen, "written" by three "renowned" critics (two of whom are now deceased, so I shall not name names, out of a level of respect which the music critic default mindset would never recognise).

Actually, strike out that "borderline"; homophobia is a staple of manly rock writing - it's there eleven years later in the NME's "review" of Bronski Beat's The Age Of Consent, and appeared as recently as last week, in relation to Kele Okereke's The Waves Pt. 1 (accompanied by closet racism; can't have those *pp*ty blacks have opinions, can we, CHAPS?).

It would consequently be so easy for me to stamp an aggressive boot on the final Queen album, as they were once constituted, and I'd probably get five hundred hits an hour if I did that. Let me instead give the record a quick and relatively considered overview. The genesis of Made In Heaven lies in the aftermath of the sessions for Innuendo, when Freddie Mercury, conscious of the little amount of time he had left, recorded as many vocal tracks as possible, with clear instructions to the rest of the group to get these songs finished, if necessary posthumously.

In 1993, May, Deacon and Taylor reconvened, with producer David Richards, to see if they could make an album out of what Mercury had left them. Unfortunately the songs and vocals which he had bequeathed were insufficient to make up a full-length album, so the four looked into reworking other, older material, including reworkings of a couple of songs from Mercury's 1985 solo album Mr. Bad Guy ("I Was Born To Love You," here turned into a scorching, guitar-heavy rocker, and "Made In Heaven"), revisits of odds and sods from various corners of Queen's career, chiefly the eighties edition, and a few new songs, including Mercury's "Mother Love," which here samples a snatch from the cover of Goffin and King's "Goin' Back" recorded in his Larry Lurex days.

What else is there to say? "A Winter's Tale," the last complete song which Mercury wrote, is a much better Christmas song than "Thank God It's Christmas." "Mother Love" ends with what is apparently a speedy pile-up of every song Queen ever recorded, culminating in the sound of a baby crying. The second "It's A Beautiful Day" is more forceful than the first, and climaxes with a sample from "Seven Seas Of Rhye"; the memorial intent is palpable. "You Don't Fool Me," assembled from bits and bobs of incomplete Mercury words and vocal ad-libs, is a splendid electro-House workout and a direction the band should perhaps have pursued more avidly after Hot Space.

In its generally upbeat and optimistic nature, despite some of its song titles, Made In Heaven was a brighter farewell to Mercury's Queen than Innuendo had been. For me it's a little too polite and polished, but it does its job of remembrance pretty efficiently. Of the untitled tracks at the end, "Yeah" is a four-second snippet of Mercury saying the word "yeah," while the twenty-two-and-a-half-minute drones of "13" could be intepreted as David Richards mucking about with a sampler and some Mercury vocal lines, though its broad birth-death-transfiguration sequencing doubtless continues to prove inspirational to many. There's a bet-hedging review for you. Better than a bunch of fucked-up old music journalism "legends" trying to find excuses not to nail their heads to the floor, though, eh?

Posted by Marcello Carlin at 10:28