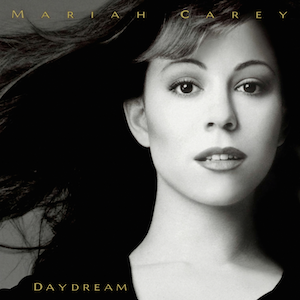 (Author's Note: written by Lena, edited and published by me)

If Mariah Carey were politely going along with what her husband and her record label wanted her to do, Daydream would not be half as very fine as it is. It is so, so much better than Music Box – and that is down to Carey having a lot more say in what is happening, doing the majority of lyrics and music herself. Of course, she could have done that and stayed carefully in the confining lines her husband Tommy Mottola had drawn for her, but Carey wanted the dreamy sensuality of Minnie Riperton (“Underneath The Stars”) and the hip-hop beats, she specifically wanted to work with Ol’ Dirty Bastard on the joy that is “Fantasy” (the original is on here, but the version with him is on her Greatest Hits), she wanted to work with Boyz II Men on a ballad in tribute to those lost to AIDS (Boyz II Men had the same idea – “One Sweet Day” is thus a very personal song made universal*).Mariah wanted and Mariah – perhaps with a diva’s tantrum here or there, but I’m on her side – got.

For the Columbia execs who were getting cold feet, Carey was very smart to include an old-fashioned  ballad, “Forever,” as if it were still 1962; she also covered, of all things, “Open Arms” by Journey, very nicely arranged to sound like a Carey ballad without actually being one. For herself she had an interlude club version of “Fantasy” done with David Morales – swinging, engaging, modern – alive. This is what I want, she seems to be saying – no limits. Not in tempos, subject matter, styles – I am doing what I want.

In the gospel-rooted song “I Am Free” she thanks (this is my interpretation) her husband for giving her the “ray of hope” that has enabled her to do all this in the first place –“free to enough to fly” anyway she wishes. It is a plain and heartfelt song. So is “When I Saw You” and suddenly it comes to light – Mariah has dedicated this album to her husband, to their past, to what she once felt but perhaps doesn’t anymore. This is the prettiest of remembrances, and her love is still very real. But the freedom she now has artistically is the real thing that is saving her, I sense. “Long Ago” with its solid hip-hop beat courtesy of Jermaine Dupri is tougher and telling it how it is – “Long ago you used to want me/Now it’s all so far away/But you still haunt me/Take me back to yesterday.” What she wants is missing and she is “crumbling down” without his love.  This is what a teenage Beyoncé will pick up and run with in a decade’s time.

“Melt Away” is her and Babyface’s admission of weakness, the crumbling turning into a melting, living in a “cloud of reverie” far away from what is happening, what is possible. This is very much an album of what could be, what is daydreaming, what is longed for....”Forever” admits straight off that the love is over, but her Other is still hers forever – “you will always be the only one.” And there in the lyrics is the “we belong together” which will be repurposed once she fully is emancipated...

Most startling however is the quiet, mournful “Looking In.” She is asking someone – everyone – to look beneath her surface. Mariah sings about the girl inside herself, hidden away, tearful, insecure.  “Don’t think that I am disenchanted.” She is outside looking in, dissociated from herself, the real her defended strongly from anyone who could do her harm. This is Mariah saying – ha, you think you know me, but you most certainly do not.  As free and open and even rebellious as Daydream is, this is not her version of Live Through This or Hungry For Stink (though she is recording her grunge album under the name Chick in the evenings while working on this album in the mornings). Is “Looking In” also addressed to her husband? It is a song of defiance, sorrow, a letting in of some air in a world that is stale and full of images, flat and pervasive.

It is a sad thing to note that this is, so far, the last time we reach Mariah here in this tale – her emancipation and elusive and butterfly-like self, always evolving, will not be charted here. The UK public seem to have settled on her being that woman with the bouncy Christmas song, dutifully buying her albums, but never enough to reach the top so far (Butterfly got to #2, stopped only by an extremely hyped Britpop album). This is nevertheless a huge step forward and a measure which stands for any star to equal – to go against your own label and family, to push for what you want and fully express yourself, to take that freedom and run with it. This is what she was committed to and it worked; she was vindicated. It is one thing to have that freedom and exercise it; it is another thing to have too much success, but not enough freedom.

*”We miss you David Cole” she says in the liner note; Boyz II Men had also lost their road manager.

Posted by Marcello Carlin at 12:24