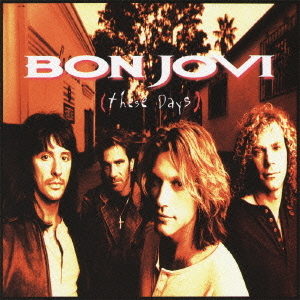 *Additional tracks on European and Japanese editions only

Quadruple platinum in Britain, which is 200,000 more than it sold in the U.S.A., and minus their original bass player, but These Days showed that Jon Bon Jovi still had something to prove, even if only that anyone remembered who Bon Jovi were, which, happily for him, enough people did, particularly those who didn’t, couldn’t or wouldn’t keep up with newer developments.

Jon did his best – say what you like about his band’s mildewed centrism, but he has never not meant whatever he means – to keep up, in that he’d heard of Tool and almost certainly checked out Pearl Jam and Nine Inch Nails, or at least saw The Downward Spiral at the front of his local Tower Records.

Despite all this, the very long haul of These Days – twelve songs averaging five-and-a-quarter minutes each, and that’s not including the bonus tracks – suggest a bewildered, dungaree-sporting U2 wannabe. They sing of Big Things like poverty (“Hey God”), little deaths (“This Ain’t A Love Song” – and no, you ain’t PiL), even mutter about The World Today (title song) and persuade their guitars to weep a little more modestly (“My Guitar Lies Bleeding In My Arms”) and it mostly makes me grateful for treble-combating paracetamol.

There are one or two slightly interesting touches; “Damned” at least wears its Committed transfer on its sleeve, “Diamond Ring” is scuffled Hispanic balladry, and “Bitter Wine” lumbers through the corridors of The Faces, touches base with Primal Scream and foresees the later Oasis. On the other hand, “If That’s What It Takes” tries its best with drone guitar whine and a stuttering vocal sample but can’t flee the shadow of “Don’t You (Forget About Me).” “All I Want Is Everything” sounds quite enterprising until you recognise the "Sign ‘☮︎’ the Times" riff lurking beneath its bellicose beneficence.

So they are trying not to come apart, God bless them, and they speak to people that other “cooler” musicians of this period cannot, and they push themselves as modern. The only trouble is that even Hootie and The Blowfish had eased ahead of them by this stage, and I challenge non-fans to recall any of these songs two minutes after hearing them. Bon Jovi weren’t quite sure what they were any more. Whereas Soundgarden just got on with things and trumped their entire game with “Black Hole Sun.” Perhaps that is what was eating at their honest souls.

Posted by Marcello Carlin at 15:11