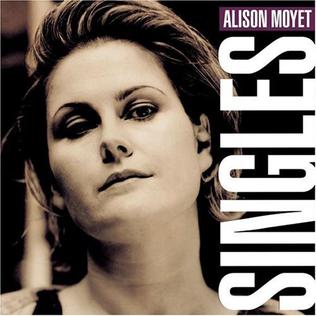 *Performed by Yazoo, though not credited as such; on the North American edition of the album, “Situation (UK Mix)” was replaced by “Winter Kills”

She really should have been the next Dusty – stretch a point for Yazoo as The Springfields – but her record company expected the next Cilla and fucked her over. Perhaps the Yazoo songs were the purest she was ever allowed to sound. CBS perhaps saw her as another Elkie Brooks – a brassy but easy-on-the-ear Two Ronnies regular. She spent the mid-eighties making music she hated but which was commercially very successful, and which is probably the reason why this collection went platinum. How many of its 600,000 buyers ever bothered to listen to it beyond “Love Letters” (or skipped the #43 smash hit “Ordinary Girl,” which could almost be a Smiths outtake)?

The songs on here which you don’t necessarily know are, predictably, the far more interesting ones, if not necessarily more satisfactory. 1991’s Hoodoo was a record of tentative catharsis; “It Won’t Be Long” does late-period Beatles better than mid-period Oasis and nods in the Achtung Baby direction. “This House” is a markedly French-sounding torch lament – Marc Almond could, and should, have covered it – and, though slightly overdone in terms of its arrangement, is probably one of the starkest expressions of unfulfilled bereavement in this tale. “Those who only know her for her earlier works will be somewhat bewildered at the depth of emotion displayed on the likes of the tortured 'This House',” said a commentator who was clearly unfamiliar with “Winter Kills” nine years earlier.

Essex (1994) was sour compromise. She wanted to continue expressing herself, but her label (now absorbed into Sony) desired quick and easy hits. Ageism and misogyny, the twin towers of the British music industry. Hence her original acoustic version of “Whispering Your Name” was given a dance remix makeover, a wacky video and a heart not in it – and still radio didn’t touch it. Much of the album was re-recorded to slide rule order, and, even in their sedated state, “Falling” and “Getting Into Something” do offer glimpses of what might have been. “Ode To Boy II” is a cheery, gutsy revisit of Yazoo’s febrile quietude.

Of the new songs, the Ewan McColl cover appears to marry Voix Bulgares ululations to the then-fashionable trip-hop thing, and “Solid Wood” is appropriately solid, but far from wooden, rock. By the time Singles came out, however, Moyet had had it up to there with her record company; she was finally released from her Sony contract in 2002, and that year’s powerful Hometime sounded like the elegant howl of long-suppressed liberation. In 1995, sunk in litigation and misery, she appeared on Later With Jools Holland with Sinéad O’Connor, providing backing vocals to Dusty Springfield in one of the latter’s final television appearances. The song being sung was “Where Is A Woman To Go?” Precisely.