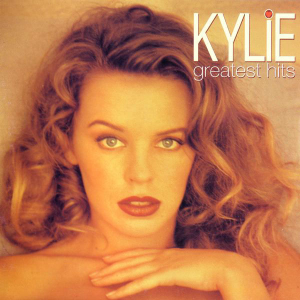 (Author’s Note: this album is, strictly speaking, credited to “Kylie,” but no surname for women be damned! One hopes that Adele Adkins and Amy Duffy will not take any umbrage from subsequent blog posts.)

It is slightly fashionable to regard Kylie Minogue as our generation’s Cilla Black, or even (for older readers) our Dorothy Squires – she’s just like us, has come through hell and low water but has somehow managed to survive (to a point; sadly, Cilla, in the end, didn’t, but more about that much later in this tale). She is deemed to pull The Nation together when The Nation is at its wit’s end – so perhaps she is our Vera Lynn (and more about her later, too!). A ”supernatural mix of high camp and total sincerity”; that’s how the Guardian reviewer of entry #1215 described her art. Excitable contributors to online message boards consider her the ”Queen of Pop.” Not Madonna, or Gaga, or Taylor, but dear, cherishable, reliable Kylie.

In 1992, however, she was critically regarded as the shit on the toes of pop’s shoes. I bought this album when it came out and endured the raised eyebrows and “Christ, he’s weird” murmurs from the people from whom I purchased it. It received an across-the-board round robin of sneery one-star or one-out-of-ten reviews (the golden age of music criticism? Read the Select Magazine Archives – it was all in your selectively amnesiac head) and while it automatically went (or at least shipped) platinum, this 77-minute compilation only stayed on our chart for ten weeks. It was as if people were embarrassed to admit to liking Kylie or her music.

To be fair, Kylie was not fashionable in the second half of 1992, and neither for that matter were Stock, Aitken and Waterman, who produced and wrote most of what appears on this album. Actually, revisionism be damned; SAW, the three-man Tony Wilson-but-with-pop team who had the nerve to become successful and not be modest about it, were never fashionable, unlike such cultural giants as The Wonder Stuff. But by 1992 the team were down to two; a tired and stressed Matt Aitken opted out in mid-1991 and it became Stock and Waterman only.

Their days were also not as they had been. The Hit Factory had ceased being fun. The team had essentially become butlers to Kylie and Jason. Because of their concurrent musical and acting schedules, involving flying back and forth to and from Australia to appear in Neighbours, everything had to be planned around them. Work became a chore rather than a pleasure, and when the Stone Roses and Happy Mondays rose to belated prominence, they probably recognised that their days were numbered.

This minutely contradicts what Kylie said about SAW: "I was very much a puppet in the beginning (my italics). I was blinkered by my record company. I was unable to look left or right." What her Greatest Hits album tells us, however, is the story of a happily obedient child who comes in, does as she is advised (as opposed to “told”) and strikes it big but then grows up, becomes an adult, and finally outgrows her mentors.

The collection marked the end of Kylie’s recording contract with SAW and it is fair to say that the three “new” songs appended to its end were done to fulfil its requirements. Certainly, “What Kind Of Fool” is intentionally self-parodic, and its extremely bitter lyric was the singer’s work. In contrast, “Where In The World?” sounded terribly naff and dated even in 1992, like a stray failed 1968 Eurovision Song Contest entry. Hers is also one of the least celebratory versions of Kool and the Gang’s “Celebration” which I have heard.

In fact Kylie noticeably flounders when faced with cover versions, be they of Little Eva, or Little Anthony and the Imperials, or the Chairmen of the Board; her readings are dutiful and efficient but characterless. They furnish her pop with a backstory which is not really needed and indeed is something of an obstacle.

Best, therefore, to spin back to pop as she, and perhaps she alone, recognised it. The early hits bear an endearing homemade flavour about them (which was close to the actuality of their making) comparable to say, French Yé-yé pop being interpreted on Sarah Records – if you think this especially farfetched even by Then Play Long standards, then play “Je Ne Sais Pas Pourquoi” and follow it with, say, “I’ve Got To Wake Up To Tell You My Dreams” by The Orchids. They are what they are, these early songs - flimsy but cheerfully permanent (and “Lucky” and “Pourquoi” are something more than flimsy; “Turn It Into Love,” a Japanese-only single but included here, is, I still think, too mature a song in its sentiment for twenty-year-old Kylie to deliver convincingly – Hazell Dean’s contemporaneous reading is more intriguingly arranged and much more authoritative in its delivery. “It’s No Secret” was released as a single only in the USA [where it penetrated the Billboard Top 40], Canada, New Zealand and Japan).

With the success, SAW upgraded their equipment, and so Kylie’s work from 1989 onward carries an extra punch and dynamism. In addition, she was audibly growing in confidence as a singer; the electricity of “Hand On Your Heart” would not have been achievable even twelve months earlier. “Wouldn’t Change A Thing” is one of her most charming and harmonically inventive numbers. The strobe-lit 3-2-1 discotheque kinetics of “Never Too Late” mask a very strong and actually quite moving song (as confirmed by her subsequent and very different reading of it on 2012’s The Abbey Road Sessions).

In 1990 she entered the imperial phase – artistically, if not commercially – of her SAW years; “Better The Devil You Know” sparkles with a scarlet life and turquoise passion that are far more “soulful” than anything from The Commitments; I regret the fact that Billy MacKenzie didn’t cover it. “Step Back In Time” is a very clever anti-nostalgia treatise – Kylie would have been far too young to remember the O’Jays or the Blackbyrds when they were happening, and the song is a subtler variant on the Reynolds Girls’ “I’d Rather Jack.” Even the hidebound NME and Select had to acknowledge the genius of “What Do I Have To Do” – great, glowering pop, Cabaret Voltaire producing Nita Rossi (go on, look her up) – and the gallus glory that was, and is, the DNA single mix of “Shocked,” complete with rap by one Jazzy P (a.k.a. Pauline Bennett from Wolverhampton).

As 1990 gave way to 1991, so was Rhythm Of Life succeeded by Let’s Get To It (there were many used copies of the latter in Notting Hill MVE, with the additional red-inked sneered scribble of “LET’S SHAG” – how dare Kylie think she was Marvin Gaye!) which aspired to a degree of sophistication which was slightly beyond its grasp. “Word Is Out” is decent but not thrilling. “If You Were With Me Now,” sung with Detroit singer Keith Washington, tries very hard not to be Alexander O’Neal’s “If You Were Here Tonight” (although at least Washington is a far better vocal match for Kylie than the hapless Jason, whom she easily and effortlessly out-sings on “Especially For You”). “Finer Feelings” lunges hopefully but haplessly towards Massive Attack territory.

It may simply have been the case that Kylie now needed more than SAW (or, as they ended up, SW) were able to provide her with in order to help her develop. I am also mindful of the fact that her imperial SAW phase roughly coincides with her relationship with Michael Hutchence, who perhaps was able to show her brighter, deeper and heavier things. Despite its langueurs, however, Kylie’s Greatest Hits generally zips by quickly and excitedly. It is true that she is scarcely happy on any of these twenty-two songs – not even, or especially not, on “Celebration” – and that the only occasion when she is found to be happily in love (“Especially For You”) occurs in a song about a reunion following a break-up. It is also, in places, accurate to remind oneself that this is the work of a singing actress. But it is no source of embarrassment, nor should it ever be. We will return to Kylie Minogue in this tale, as inevitably as the sun returns to the sky.