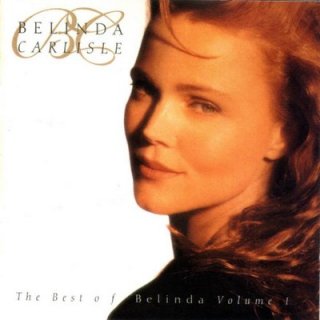 In his 2004 book Popstrology. The Art and Science of Popstars, Ian van Tuyl is none too kind about this Belinda Carlisle, as opposed to the one who sang, or still occasionally sings in, the Go-Go’s. He essentially describes her solo work as Stepford Wives pop; what, he wonders, became of the ebullient and spirited frontwoman of one of the most important and influential pop groups of the eighties? It was as if she had been done away with and replaced by a mechanical replicant, compliant with all the requirements of late-eighties/early-nineties Reaganpop.

Listening to the fifty or so minutes of this compilation – there was never a Volume 2 – is like being benignly battered over the head by an Mk44 Bushmaster II chain gun; indeed, many of its songs bear a pronounced “bring our boys home” gait since they sound determinedly BIG and rely on simplistic SLOGANS to make their point. Where the would-be new Forces’ Sweetheart Belinda Carlisle is in all of this is questionable. She growls when she means, or is told, to (including at the same mechanical point in each bridge of “Heaven”) with an overall aura of pop Stevie Nicks; this is not an unreasonable comparison point, since the underplayed, and therefore more interesting, “I Plead Insanity” works very well in a late-period Fleetwood Mac fashion.

In some places, though – notably in “(We Want) The Same Thing)” - the smudgy guitar riffs and Rockettes “hey! hey!”s seem to mock all that the Go-Go’s stood for; see, this is what gets punk rock played on late-eighties MTV! With the exception of some of the lyrics to “Little Black Book,” none of it comes directly from Belinda either; most of these songs were written by off-the-peg pros Rick Nowels and Ellen Shipley, with the odd unlikely additional contributor (Marcy Levy a.k.a. Marcella Detroit, Maria “Body Rock” Vidal). It is something of a relief when Diane Warren takes over for “I Get Weak” and “World Without You,” since these are intrinsically well-constructed pop songs which go somewhere rather than standing there gleefully yelling at you; not that the dour AoR ballads are especially better – affairs like “La Luna” and “Circles In The Sand” come across in the manner of budget remakes of “La Isla Bonita”; the inbuilt beach in the international airport.

There is the infrequent alert to emotion, a reminder that somewhere still lurks a living, breathing Carlisle; for instance, her emotional collapse at the climax of “Vision Of You” (“Nobody's kiss moves me inside/And I have no place left to hide”). But those moments of rare candour are submerged almost instantly in the struggle to sound immense, and Republican, and in denial with regard to the singer’s past. The first three Go-Go’s albums remain splendidly glorious, and the fact that Carlisle subsequently joined in several reformations of that band, together with the decidedly anti-corporate sound of her next studio album, 1993’s Real (which with saddening typicality, sold next to nothing), suggests that she came to a similar conclusion. But bring those boys home! Light up those gun boats! Don’t you know there’s a war on, Dale Koba, or is that just the way you like women to be?