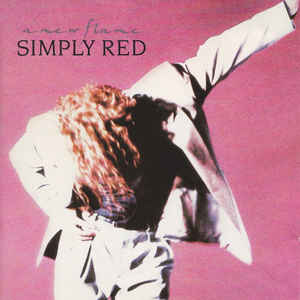 If Mick Hucknall fulfilled the same function that Rod Stewart had done for album-buyers in the seventies, then he seems to have progressed straight to the Rod Stewart of Foolish Behaviour or thereabouts ("Holding Back The Years" was his "Mandolin Wind"); most of Simply Red’s third album could serve as alternative themes for 1986’s hilarious Robert Redford/Debra Winger knockabout comedy Legal Eagles. Listening to this, and looking at what follows it in 1989, makes me wonder anew if this is really how two-and-a-sixth million British people preferred to be entertained; boring, expensive music promising boring, expensive lifestyles to boring, expensive people.

I mean, Hucknall tries – at least, he tries my patience – by God, how he tries (at times). But just as the cover versions prove that he is neither Barry White nor Teddy Pendergrass, there is so much banal lurve stuff here, like a Farmfoods Luther Vandross, and the Montserrat setting for its recording, with tasteful guitars plucked just so and just the right amount of echo to give the impression that one is in the driveway of the Sandy Lane Hotel in Barbados, suggests that Hucknall has lost sight of what prompted Simply Red in the first place; the picture of him on the inner sleeve, grinning and cocking his head in what looks like a pyjama jacket, resembles no one so much as professional seventies pop troll Judge Dread (the portraits of the rest of the group are direly dated in both clothing and hairstyles, although guitarist Heitor T P looks uncannily like Bobby Gillespie).

He doesn’t, it has to be said, entirely lose sight of what really inspired that “Red”; after the tepid love bath of side one, it is something of a shock to hear him launch into a fulsome anti-Tory blast on “Turn It Up”; “…Ruling the country/Are unfaithful husbands/Who spank little boys/Gagged and bound” is startling imagery even by 1989 standards (again one has to ask: did Hucknall know what the rest of us pretended not to know?). But its streamlined “soul” surface makes one wonder how many of the shy and not-so-shy Tories who bought this record ever bothered to listen to what he was saying. It’s the same story with “She’ll Have To Go” which is a better anti-Thatcher tract than “Tramp The Dirt Down” – but again, unless you read the lyric sheet and pressed an ear to the speaker, how would you know that was what it was?

The harmonically agreeable lovers rock of “More” was the only thing here I wanted to hear more than once, but even this serves as a reminder of how Sade did, and do, this sort of thing so much better. And yet for most of its year A New Flame was the year’s biggest-selling album, only being overtaken towards the end of 1989 by entry #387. I don’t quite know whether Hucknall qualifies as Britain’s Michael Bolton – for a start, he only ever seems to have had one haircut, rather than two – but it is uncannily prescient of the allegedly beloved New Labour; don’t say what you really think or stand for, just make the right faces and make the right noises to win over the waverers. Wavering towards, or away from, what? On a Mancunian level, A New Flame - the first, it should be said, of five number one albums by Simply Red - possesses enough inbuilt torpor to make me wonder whether the group shouldn't have been named Mick Hucknall's High Flying Birds.
Posted by Marcello Carlin at 13:01