DEACON BLUE: When The World Knows Your Name 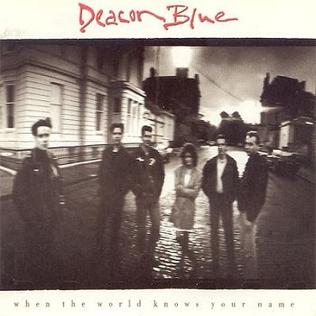 No doubt Ricky Ross considers himself as a sort of Alan Spence of pop, telling small stories about small victories and bigger metaphorical losses in a land where expressions like “wages day” are still used and whose people are still called things like Fergus. He is also righteously and rightfully angry about what his country and its people might turn into, as one listen to “One Hundred Things” will confirm, with its call to every “Jimmy” in the gutter to rise up and fight back.

The trouble is that the music has to rise to meet the spirit of the word, and too many times on this album it doesn’t, or buries the word beneath tasteful echoes of murmur. These songs sound expensive, and stifling; whether their subject matter is Maria McKee (“Real Gone Kid”) or the Spanish Civil War (“This Charming Light”), they get drowned out by restraint. The accelerando at the end of “Queen Of The New Year” leads to nothing, a step back which isn’t really erased by the extended, but fatally tasteful, feedback fade of “Your Constant Heart.”

Neither do I find Ross’ voice particularly endurable; most of the time he sounds like Paddy McAloon in severe need of Strepsils, and he has an uncomfortable growl, somewhere between Eden Kane and Barry McGuire, which, when used in extremis (“SHATTERED HOUSE!” in “Love And Regret,” the sudden upward ski-leap at the end of “One Hundred Things”), does not make him Samuel T Herring’s spiritual father.

What so much of this music does make Deacon Blue, unfortunately, is a direct precedent to the likes of Mumford and Sons; the majority of these songs play shamelessly to the stadium gallery. Attempts to rock out (“This Changing Light”), do Jam and Lewis (“The World Is Lit By Lightning”) or do the Blue Nile (“Sad Loved Girl” – truly, Hats and Paul Buchanan’s voice and feelings are everything this record and its singer aren’t, and let’s not even mention entry #386 – for now) end in the same compromise. I know Ross is enraged, and justified in being so, and have no idea about Michael Marra’s musical tastes, but the “sweet soul music” part of “Fergus Sings The Blues” – all about owning the “right” records, rather than the ones which touch you (the B-side of the “Real Gone Kid” single included covers of songs by Sam and Dave and Hüsker Dü; such “correct” choices that might provoke a scream) – could be said to represent the turning point where prosperity would be superseded by austerity.

Next: The first of our occasional short breaks, where we look at an album that isn’t on the Wikipedia list.
Posted by Marcello Carlin at 12:50