DIRE STRAITS: Money For Nothing 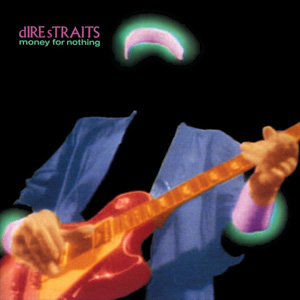 You have to hand it to Mark Knopfler ; he knows his demographic inside out and shamelessly plays to it. By his demographic I mean the moderately solvent but still pissed-off male nearing middle age who feels the world has failed him, recognises nothing of the world as it is now – even if that now is now approaching or passing thirty years ago – and, far worse, suspects that the rest of the world is having a much better time than him. I emphasise the maleness here because I doubt that many women would be empathetic towards something like the inordinately creepy “Where Do You Think You’re Going” – as Lena said, give that to Nick Cave and he’d sing it as a murder ballad – or “Romeo And Juliet” wherein Knopfler grumbles at the love of his life who’s had the cheek to go on and become a star (it’s like a Daily Mail “Don’t You Want Me?”).

The rest of the time, when he’s not feeling sentimentally nostalgic about fifties and sixties Tyneside (“Down To The Waterline,” “Tunnel Of Love”), he sneers at people who aren’t him, be it Central Line buskers, pop stars on television or semi-pro jazz bands. But it was his choice to go into the pub and hear a Dixieland band – and who the hell still wore “brown baggies and...platform soles” in 1978? – since, after all, he could easily have gone along and seen John Stevens, Trevor Watts and their pals at the Plough in Stockwell practically any Friday in the seventies. Even when he tries to do pop it is ponderous, forced and somewhat contemptuous (the disastrous “Twisting By The Pool”).

No doubt when he came up with the “street suss serenade” of “Romeo And Juliet” he seriously thought of himself as another Lou Reed but the song’s chocolate box melodrama pales instantly against Reed’s Growing Up In Public, released the same year as Making Movies which, though almost as conservative musically, is directed towards real people and real feelings – his second wife, his parents (“My Old Man” is one of rock’s most virulent eviscerations of the father figure) – and there is a sequence in the relatively restrained “Think It Over” of which Knopfler would have done well to take note:

“Because when you
Ask for someone's heart
You must know that you're smart,
Smart enough to care for it.”

Knopfler’s failing is that when he asks for someone’s heart, he expects that heart to be his housemaid. The expected Love Over Gold and Brothers In Arms selections are here and don’t need to be retraced, other than to say that even on the one record where he got it right – or, should I rightly say, outside or without the context of that record – “Private Investigations” can come across as simply further inscrutable, inaudible murmurings within an indefinable and possibly voluntary darkness, and that “Telegraph Road,” here presented onstage at the Hammersmith Odeon in June 1983 (it’s part of the Alchemy live double set; the Kevin Ayers’ Slim Chance reject “Portobello Belle” is an outtake from the latter) is divorced from its emotional heart by having people clapping their hands and cheering along to it, or by Knopfler endlessly playing his one “solo.” 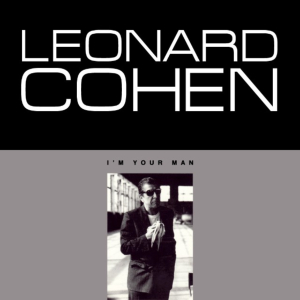 Two of the four main advantages that Cohen has over Knopfler are lightness and humour, and he uses both to mask some of his darkest and most apocalyptic meditations on what was essentially his shrug-shoulders, what-the-fuck comeback album. The other two advantages are his innate poetic skills and the absence of fear of the present. If Cohen wanted to present I’m Your Man as late eighties Leicester Square-friendly Europop, that was his prerogative, and he understands Please/Actually-era Pet Shop Boys better than most; “First We Take Manhattan” responds to “It’s A Sin” by implying “sin? You don’t know the half of it” and backing up its argument with things and people which were relevant to Cohen’s life – the plywood violin and bringing the groceries in both carry a considerable personal back story, and familiarity with Beautiful Losers will join yet further of the song’s dots. Meanwhile, “Jazz Police” is a thrilling post-PSBs assault on harmonic structures and a very pointed attack on the self-deprecating Puritanism of something like “Sultans Of Swing.” Both “Take This Waltz” and “I Can’t Forget” have a kind of rueful mirth in their End Of The Affair settings which is entirely absent from the gainsaying “Romeo And Juliet.” The title song offers everything from its singer, if conveyed slightly desperately, whereas “Where Do You Think You’re Going” threatens to take everything away.

“Ain’t No Cure For Love” is the oh-fuck-it-surrender pop song that Knopfler was too afraid to write, “Everybody Knows” could have been written yesterday (that oud!), and “Tower Of Song” is one of the most graceful and terminal signoffs, genuinely self-mocking (“the gift of the GOLDEN VOICE,” his one-finger keyboard solo) while saying goodbye as finally and grimly as “Telegraph Road.” But there’s a world of difference between how Cohen and Knopfler, at the end of their respective records, treat the business of bidding farewell. You believe one and not the other. I listen to I’m Your Man quite a bit and many of its songs have been covered, with varying degrees of success., whereas I cannot readily think of cover versions of any Dire Straits song. Money For Nothing? Truer than you think – you’re paying for a sumptuous black hole, eighties rock’s most ornate and elaborate dead end. No wonder some Dunfermline-based building society managers were still listening to it and loving it as late as 1995.