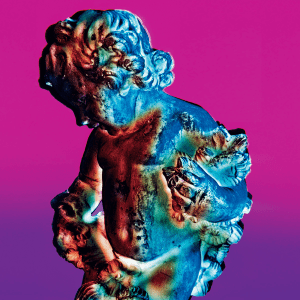 “Fine Time” must be one of the reddest of herrings when it comes to album openers. The mix is not so much different from that of the single, but has been reordered to make even less (but more giddy) sense. It inverts the concept of A Pop Song so thoroughly that it throws the whole concept into questions of merriment. It captures the dis-order of Acid House, Ibiza and all that in a way that even indie Easter statues could absorb. Twice the beat disappears  - firstly, when a vocal sample and the familiar lighthouse of Peter Hook’s bass lead one to think “ah, THIS is New Order” before being completely eradicated by the renewed off-centre beat; Stephen Morris plays across the Balearic undertow with martial triplets in a way so natural it unexpectedly reminds me of Slade. But the beat is never on the beat; your head swirls as it might have done under the Ibiza influence. Huge, foreboding boulders of metallic noise crash in our pathway, only to be succeeded by delicate celeste-type keyboard figures (with occasional sheep bleats). In and around all of this, Bernard Sumner’s voice dips and dives, sometimes fearfully (“You’re much too YOUNG!”), at other times hilariously Seductive Barry. Listening to it, you could think that, as the decade drew to a close, New Order had succeeded in exorcising its own ghosts.

Perhaps it was that false dawn that caused so many over-hasty critics to run in and proclaim Technique a joyful post-rave/indie communion. Actually, if any Factory act had learned these lessons well, it was Happy Mondays; 1988’s Bummed, their best album, found them giving the past the E-finger. The full-frontal on the inner sleeve is maybe more “coarse” than Peter Saville’s solemn and possibly mourning statue, but instead of falling into the trap of wanting to sound like Balearic beat, they got Martin Hannett to re-sculpt their sound. Hence “Mad Cyril,” “Wrote For Luck,” “Lazyitis” and all the rest of them sound like the Cocteau Twins playing a residency in Peter Kay’s Phoenix Nights; not really of any world to do with known “rock” but, perversely yet logically, entirely of themselves. They sound happy.

But the rest of Technique is not remotely like that. The key struggle which New Order had faced throughout the eighties was that between becoming an electronic dance band or staying a rock group (it is fair to assume that three of the band were on one side and the fourth on the other). And so their albums of the eighties mainly see them trying different things out with uneven levels of success, but that is also why the singles compilation Substance is actually their best album, since it assumes that the compromise has already been accomplished.

On Technique, however, the songs balance out fairly evenly; four are essentially dance music and four basically rock. There is an airier than normal feel to the rock songs, admittedly, and the Spanish guitar figures on “Guilty Partner” point to a beneficial Balearic influence; but only “Dream Attack” attempts an uneasy truce between the two.

Nonetheless, after “Fine Time,” the rest of the album is relentlessly downbeat and probably has much more in common with something like the Cure’s Disintegration (“Lovesong” could have fitted on here without any jarring discontinuity). Much of this is to do with the lyrics, all of which were written by Sumner, who at the time was going through a painful divorce, and all of which appear to refer to same. There is at times a bitter tiredness to Sumner’s voice which hadn’t been there before; note the complete exhaustion with which he delivers the payoff to “Love Less”: “I spent a lifetime working on you/And you won’t even talk to me.” On “Guilty Partner” he half-sneers the choruses (“You’re-NNNNOT-being-CRRRUEL to me!”), somewhat out of tempo; as with “Round & Round,” the words are spiteful and accusatory, but here it perpetually comes back, via different angles, to “come back to me,” so comprehensively you almost miss Gillian Gilbert’s keyboards coming in and realise that it’s turned into the 12-inch version of “She’s Lost Control.” Likewise, “Run” is probably the album’s best “rock” song with its careful and patient build, but again once the clouds of synthesiser materialise, we find ourselves in the snowscape of “Atmosphere.”

On “Mr Disco,” which tackles house music more readily with its blasts of Fairlight shriek, Sumner wonders whether music actually is an answer to anything, or merely an obstacle to life; he’s in the club, on holiday, but he’s lost – “I can’t find you” Sumner repeatedly cries, before reaching a payoff worthy of Martin Fry: “Ibiza, Majorca, and Benidorm too/I’ve seen all these places but I’ve never found you.”

Whereas “Vanishing Point” is Technique at its most forlorn; a keyboard melody of sadness worthy of the Pet Shop Boys appears in the foreground, and synthesisers swell up in a strangely familiar fashion as Sumner pleads “Grow up children, don’t you suffer/At the hands of one another” before Hook’s emphatic bass enters and we reach a heartbreaking and poignant end-of-everything chorus (“I’ve been through the Point of No Return”). There is some slight hope, but Sumner mumbles something about Whistle Down The Wind at the end (“By the look on His face/He never gave in”) and the song stutters to a halt, petrified on its own crucifix. “Dream Attack” temporarily strengthens that newfound faith in music (“Nothing in this world/Can touch the music that I heard/When I woke up this morning” – this inversion of a blues trope doesn’t mean he’s not singing the blues) but again the singer falls back into pleading and mourning (“I can’t live without your love,” unconsciously paraphrasing Petula Clark). In the end, there is no resolution, but the weariest of sighs from Sumner as he sings “And for you I would do what I can/But I can’t change the way that I am.” With that, the voice excuses itself from the record, which ends in a long instrumental run-out which seems to re-ask the question “What am I supposed to do?” musically.

You may have guessed that some of this will find an echo in entry #720. But what if there are other ghosts at work or in mind here? What if all the “come back to me”s and the “I used to feel what language cannot say” which stands out in “Mr Disco” refer to somebody else who is missing?

The reason I ask these rhetorical questions is because here we are, in 1989, and New Order actually don’t seem that different from, or markedly less troubled than, what they were in 1980. If side two of Closer presented its audiences with emotions and demons they didn’t want to touch or even acknowledge, then much of Technique is, in its own way, as harrowing to listen to. It’s nearing the end of the decade and the eighties are slowly breaking up, as indeed are, I suspect, New Order themselves. And the ghost which has pervaded all of this decade has not faded away into the background or been forgotten. I once thought Joy Division/New Order my favourite group but there is an underlying pain present in even the most superficially cheery of their work that is hard to dodge or ignore. Perhaps “favourite groups” are things you have when you’re younger and less “wise.” At one key point in “Vanishing Point” the beat stops and all you hear are the plaintive Kraftwerkian melody and a ticking electronic cymbal; you think “how vast is the emotional depth of this apparent emptiness?” and realise that this air is still thick with the aura afforded to ghosts.
Posted by Marcello Carlin at 13:44