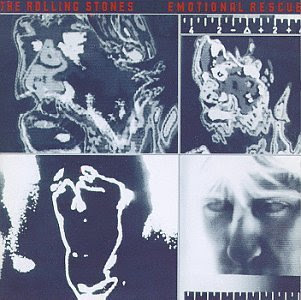 The last word on Some Girls is “Shattered” and the last palpable words sung on that song are “does it matter?” The overwhelming feeling one gets from the follow-up is that nothing matters at all…except love, as the last words on the record make very clear. In that sense, Emotional Rescue has more in common with Flesh And Blood than just Jerry Hall; but remember that one of the main reasons she left Ferry for Jagger was that Mick was more fun to be with. Wandering through Flesh And Blood, it’s easy to see what she meant; Ferry seems to be perpetually strolling underneath a cloud of permanent grey.

Still, I’m not sure Emotional Rescue is a return to the just-for-laffs edition of the Stones we last glimpsed on Goats Head Soup. Nobody is ever going to claim that it is a classic Stones album, but it’s a far more entertaining and enjoyable listen than some “classic” Stones records which spring to mind.

But then, the Stones in 1980 really had nothing to prove. They certainly did two years previously, when Some Girls was explicitly tailored as a Major Statement, that the group knew what time it was and were not yet ready to be thrown on the rusty old scrapheap of Classic Rock. So we get another “solid” Stones record, rather than its predecessor’s Declaration of Principles – except that its apparent solidity may be deceptive.

At its best, though, Emotional Rescue is a very funny and propulsive record. The opening “Dance (Pt. 1)” is a darn sight funkier than the 1980 Stones might have reasonably been expected to be; the Glimmer Twins indulging in some Richmond jive talk in the intro before the rest of the band sweeps in, Bill Wyman admirably forthright with his bass – clearly he had been paying attention to Bernard Edwards, and his creative bass work is a pleasure to hear throughout the record – while Jagger stumbles messily over some smudged observations on rich men and poor men, even though the line “Get up, get out, get into something new” could be neither louder nor clearer. He sounds like a more expensive James Chance, while the track fumbles about very entertainingly, like a KC and the Sunshine Band/Led Zeppelin mash-up. Max Romeo is just about audible on backing vocals.

“Summer Romance”’s college girl lyric might be considered trying it for a bunch of fellows approaching forty (or, in Wyman’s case, having long since passed forty) and haven’t we learned anything from the seventies, but the pretty fervent rocking going on, plus the presence of Ronnie Wood, suggest a Rod ‘n’ the Faces pisstake. “Send It To Me” finds the band wearing their reggae tennis shoes (Romeo does some additional percussion) with a very silly lyric about Jagger wanting money, or love, or possibly both; it namechecks the then-current Alien (so that the hard-of-keeping-up Mick knows what decade it is).

“Let Me Go” begins encouragingly with Jagger cheerfully asking, “Can’t you get it through your thick head?/This affair is finished – DEAD!” Still, he is, at this point, perfectly happy with Jerry – so whom is he singing about? From the second verse onwards, he sings the song in a puzzling Deep South drawl. Charlie Watts’ drumming here, however, is a model of subtlety. Whereas “Indian Girl” is just inexplicable, Jagger muttering about Castro and Angola (he’s been reading the news! He’ll show that MPLA who’s boss!) over Jack Nitzsche’s bizarre Mariachi trumpet chart and Wood’s even less logical pedal steel; still, one notes the increasing breathlessness and impatience of his “gettin’ harder…an’ HARDER!” refrain.

Over on side two, we get the ludicrous, perhaps deliberately so, “Where The Boys Go” where the Stones finally get to grips with this Punk Rock behemoth. Actually, as tends to be the case with even the weaker Stones records, the album is now sounding like the best record Primal Scream never made, and here comes Mickey Rotten (or possibly Kenneth Williams) with his sneery Cockernee drawl, with the overall feeling of the cast of Crackerjack tackling Sham 69’s “Hersham Boys.” The understated star, however, is, again, Charlie Watts, with a modification of his machine-gun snare from “Let Me Go.” The closing call-and-response boys-and-girls mass chanting might charitably be described as the Stones having just got around to hearing Slade.

“Down In A Hole,” however, is the Stones at their uncomfortably bluesy best, Sugar Blue’s grunge harmonica blending in well with Keith and Ronnie’s guitars, together offering the best harmolodic interplay this side of Ornette’s Prime Time, while Jagger gives a more sustained and coherent critique of the rich man/gutter two-sides-of-the-same-coin scenario (the lines “Your black market cigarettes/Your American nightclubs/Ah, they’ve got nowhere left” are worthy of Recent Songs-era Leonard Cohen).

Then it’s time for the hits, and what odd hits they are. The title track was issued concomitantly with the album as a single in Britain, and thus didn’t chart quite as well as it might otherwise have done (peaking at #9), but Jagger’s strained falsetto is quite unsettling and not remotely like the Bee Gees, although Wyman again pushes the beat forward with no small amount of vim. Disturbingly, though, in the instrumental break, from Jagger’s unsteady “crying” onwards, the track briefly sounds like 1980 Roxy Music – as though Bryan Ferry is trying to break through; note particularly Jagger’s chant of “Rain, rain, rain” – and Bobby Keys’ saxophone comes very close to Andy Mackay territory (or should that have been vice versa?). Once Jagger switches to basso profundo, however, the disco becomes dominated by ominous shadows, even if his “You will be MEINE” growls remind me unfeasibly of Dave Dee; see the horses’ hooves clip-clop percussion meant to articulate Jagger’s “fine Arab charger.”

“She’s So Cold,” however, finds Jagger at about his most tired and lost. He wants it, but she doesn’t, and like the protagonist of “Flesh And Blood,” one has to conclude that this is someone to be admired but not really known. He can’t get through to her (“When I touched her, my hand just FROZE”) and as the rock gets more frantic and demanding, he is reduced to primal screaming – what am I doing WRONG? How the hell can I get OUT of here?

It is therefore only fitting that Jagger thereupon disappears from the record almost entirely, leaving the last word – and the album’s best song – to Keith.

“All About You” is one of the Stones’ finest ballads; none of the midnight rambler in Studio 54 stuff in evidence on the title track, no fun or games at all really. Keys’ multitracked saxophones provide a bed of despair, and Keith, aptly, sings as though no man has ever been more exhausted. “So sick and tired” – he keeps intoning these words, playing with them, finally semi-roaring them out (as much as a hoarse voice can roar); he even paraphrases their big 1978 comeback hit (“I may miss you/But missing me just isn’t you”) and the group gently escalate to the point where Keith delivers the payoff:

And before you say, yes, Al Green could have sung it, or presume that it’s about Keith’s break-up with Anita, then read what Keith himself has to say about the song in Life, where he makes it fairly clear that – in conjunction with his having survived the “Toronto years,” kicked heroin and met Patti Hansen – the song is not about his break-up with Anita, but about him and Mick; the warring couple who loathe mutually but deep down know that neither can live without the other. It is a surprisingly downbeat and elegiac ending to what might otherwise be construed by the unwary as a throwaway album, a cheery professional interlude between Some Girls and Tattoo You (although, unlike Goats Head Soup, the music here did not send me to the brink of slumber). Is it just THIS love that matters, rather than Mick’s daft ideas about love? Does Keith stare at Mick’s forays into disco and punk, and smile ruefully?

And, yet again, where the hell is this all leading?

Next: Synthesisers!!
Posted by Marcello Carlin at 16:57