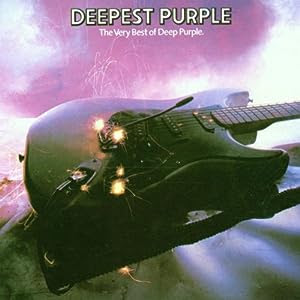 Subtitled The Very Best Of Deep Purple, the above track listing refers to 2010’s 30th Anniversary Edition, which preserves the original album’s running order but incorporates four extra tracks (these being “Hush,” “When A Blind Man Cries,” “Soldier Of Fortune” and “You Keep On Moving”) as well as a bonus DVD featuring much rare concert and television footage (“Speed King” is taken from a 1970 episode of The Vicky Leandros Show) and linking commentary from the late Jon Lord, and a cheery but informative sleevenote from Geoff Barton, of Sounds and Kerrang! fame. I have a lot of time for Mr Barton; he is the kind of music writer of which we could do with more these days – completely knowledgeable and totally authoritative within his specialist field; as persuasive as Dave McCullough, Garry Bushell or John Gill could be back in 1980, I always turned to Barton for guidance on things to do with heavy metal, and indeed Barton was almost wholly responsible for introducing, publicising and perhaps even naming that movement which was to be known as the New Wave Of British Heavy Metal (NWOBHM) which was in ascendance in mid-1980 and whose many practitioners must have regarded Deepest Purple as a sort of Bible; even though there is nothing on the record newer than 1975, the music still offers pointers to where rock could go.

I make no apologies for basing this piece on the expanded edition (as I have occasionally done with previous entries, for instance Hollywood musical soundtracks) since the CD/DVD package knocks the original, scratchy 12-track album out of the ballpark; while some 62 minutes of music were packed and compressed onto the original record, the extra 17 minutes of music here fill in some important gaps in the group’s history, the sound quality is naturally far better and overall, if you needed just one record to tell you what was so great about Deep Purple, this is the one, featuring practically everything they did that was interesting (and a few other things besides).

What maybe needs to be emphasised is the importance of the album as palpable physical package. Online ordering is in part a red herring; a CD obtained from Amazon is no less cherishable than one discovered in the average record shop racks. But, to take the theme of the previous entry a little further, I fear that the convenience of instant downloads – the minimal physical effort needed to obtain something that is (a) non-tangible and (b) not, strictly speaking, your property (unlike actual records and CDs, you are in truth renting these songs out from their providers) – is leading to a corresponding decline in the amount of emotional involvement devoted to listening to music. The less effort you have to make to find and get something, the less urgency you feel to lose yourself in the song’s fibres, to make your own sense out of a song. Or so it would seem.

Back to Deepest Purple, however, which in all probability is the best Purple record, almost filler-free and telling an easily traceable story through four different line-ups (as opposed to the two represented on the original release, whose catalogue number – Harvest EMTV 25 – tells us that this is another Golden Greats album in disguise). “Hush” remarkably didn’t make the original cut, nor (until 1988) did it chart at all in the UK, but was huge in the States, and it’s easy to see why; the Joe South song lends itself naturally to what I will call the group’s post-Nuggets approach - this is post-Mod garage rock (if that’s not a contradiction) with Lord’s organ and Ritchie Blackmore’s guitar already straining at pop’s leash, perhaps a little too much to take for a 1968 Britain accustomed to the more easily digestible likes of the Paper Dolls and Solomon King. Or possibly it’s down to Rod Evans’ lead vocal; though perfectly serviceable, Evans lacks a certain degree of individuality, and it was little surprise when, shortly afterwards, he and bassist Nick Simper were replaced by Ian Gillan and Roger Glover.

Thus began Purple’s golden age, and it’s good to see Deep Purple In Rock, about which I would not otherwise have written, represented here (although both “Black Night” and “Speed King” appear to be the single A and B-side edits). “Black Night” is still a mindblowing thing to have climbed to #2, even in 1970; Blackmore’s two extravagant solos taking James Burton out into Andromeda, while “Speed King” in both construction and delivery is a scratch-mix of rock ‘n’ roll history, with its quotes from Elvis, Little Richard, Chuck Berry, Johnny Horton and others, but Gillan squeals and roars the samples out with such carefree aplomb that you are carried along until the climactic post-Sonny Sharrock freakout ending.

“Child In Time,” represented here in its full ten-and-a-quarter minute form, however, is the business. Based in some part on It’s A Beautiful Day’s “Bombay Calling,” it’s an extended lament for Vietnam which sets up the standard rock passage from meditative quiescence to tortured elegy. In its procedurals, you can see how Blackmore and Gillan in particular are intent on gradually dragging the group, and perhaps even rock, away from the sixties and into the seventies. The song begins as though it were still 1969; heavily echoed Flamingo Club organ, the hint of a slow bossa nova tempo, the aroma of the Age of Aquarius, and then Gillan makes his sombre low entry, steadily rising, register by emotional register, via some tremulous “ooh ooh”s which make me think of early Bowie, finally climaxing with a series of terrible, extended shrieks which go beyond even the realm of Kate Bush or Diamanda Galas; there is a staccato Bolero sequence, and then Blackmore and Ian Paice double the tempo to rock out, in a passage which really couldn’t have been imagined in 1969. Just as Blackmore’s solo peaks, the music suddenly falls back into the beginning of the cycle, which encircles once again, reaching the same awful climax but somehow also reaching beyond, to a horror past the comprehension of Arthur Brown (whose Crazy World prefigures “Child In Time” to no small degree, and whose vocal style is definitely redolent in Gillan’s work). Everything works up to a psyched-out coda, Gillan screaming a dozen daggers as the band, now led by Lord, finish on a DEMONIC chord which rattles in one’s mind long after the song has ended.

Then the work about which I have already written; two tracks from Fireball and the non-album single “Strange Kind Of Woman.” There is definitely a trace of proto-Van Halen about the group at this point, not least the vocal resemblance between Gillan and David Lee Roth, but also with the decidedly non-apologetic way in which the group goes about its business, even – in “Strange Kind Of Woman” – incorporating a slow, drugged-out, drifting middle section heralded by Gillan’s oddly poignant whisper of “Oh my soul, I love you.” “Demon’s Eye,” meanwhile, might almost be Muse (complete with “Uprising” schaffel synth bass riff) but owes its power chiefly to Gillan’s remarkable performance; with Gillan, it’s all in the intonation (“You KNOW you’re insane!,” the way he can onomatopoeically represent things slipping and sliding in his brain).

The three tracks from Machine Head you also likewise know about from what I previously had to say about them, to which I should add that “Highway Star” in its general structure put both Lena and me in mind of Sonic Youth (Lena thinks “Kool Thing” and I sense “Silver Rocket”; the mid-song guitar roll-and-tumble is very Thurston Moore). 1973’s Who Do We Think We Are, the final album from the Mk II Purple line-up (which peaked only at #4), confirmed that the meter was running on the formula but still provides one last classic in the very silly but highly enjoyable “Woman From Tokyo” wherein Gillan has great fun with his corny lines (“She turns me on like a fire”) and deliberately excessive stylings (his “I just don’t be-LONG!” howl morphs into an upward “Rocket Man”-style whammy bar whoosh). Mention should also be made of the overlooked “When A Blind Man Cries,” the non-album B-side to the relative flop single “Never Before” (here represented only on the DVD), a moody downtempo blues-folk lament that finds Gillan at rock bottom (“I’m not expecting people anymore”) although his good humour shines through even when he is at his supposedly most desperate: “Am I dead or drunk, I really don’t know” and the priceless “I had a friend once, in a room.” Of course you did, Ian.

When Gillan and Glover quit they took a lot of the band’s humour with them, and it’s telling that on the original album the David Coverdale/Glenn Hughes/Blackmore Mk III Purple is represented on only two of twelve tracks. It’s not difficult to see why; “Burn” and “Stormbringer” were the title tracks of successive albums, and while Ted Nugent appears to have listened intently to the former before coming up with “Cat Scratch Fever,” there is something missing. This is not to say that new singer Coverdale and singer/bassist Hughes are technically inadequate musicians – in fact, quite the reverse – but there’s a certain gruff, unarguable maleness in their joint approach that wasn’t always evident in the androgynous work of Gillan. Lord’s classical quotes on “Burn” are on the verge of turning passé, while Blackmore simply sounds disinterested. “Stormbringer” dispenses with the wry intensity that made “Smoke On The Water” stand out in favour of a heaving, humourless approach to a dodgy flight. “Ride the rainbow, rock the sky…time to die”??? Guys, it’s a thunderstorm. Coverdale, if anything, sounds like Tom Jones here; Blackmore clearly looking for a way out. “Soldier Of Fortune,” meanwhile, is a dreary ballad which Coverdale sings as though already shaping up for “Here I Go Again.”

Indeed, Blackmore quit after Stormbringer, and the doomed Tommy Bolin briefly took over on guitar; 1975’s Come Taste The Band, a record with a terrible cover which barely scraped into our Top 20, was not represented at all on the original Deepest Purple, and here only by the 45 version of “You Keep On Moving,” jointly sung by Coverdale and Hughes and coming across like…Sammy Hagar’s Van Halen, a joyless, dull affair which Bolin does nothing to distinguish with his very workaday guitar. We could be listening to anybody…and Lord and Paice, the only two originals left standing, presumably wonder whether this is what they had signed up for. All the more relief, then, as the record goes back out on a high; the group’s most famous song saved for last and sounding as good as it did last time I wrote about it. Programme out the later stuff, and concentrate on the Gillan-Blackmore-Lord-Glover-Paice model of Purple. Serious, and crucially also decidedly non-serious, rock indeed, and enough to fuel up the NWOBHM generation, of whom we will hear more in good time.