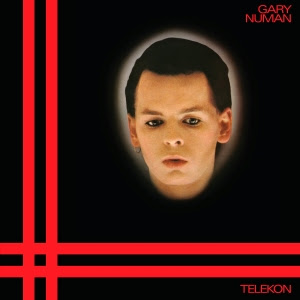 We haven’t had too many examples so far of “It’s Tough At The Top”-type albums, the self-pitying ones where highly moneyed superstars whine about how rich and famous they are and what a drag it is being a loved, acclaimed pop or rock star. Perhaps somewhere at the core of chart compilation is a safety valve that stops such records from getting right to the top.

With Gary Numan, however, there’s always something else, something deeper, or more painful, that stops him from veering onto the self-pitying superstar course. So, just as Telekon is the third part of his “Machine” trilogy of albums, I think it’s also the most convincing. Consider: on Replicas he fantasises about a violent dystopia that might be the near future or the present tense viewed through an opaque glass. On The Pleasure Principle he seemed to be getting more accustomed to being a machine. But on Telekon, the mirror cracks and he decides that being a machine isn’t as great a future as he once thought it was. Songs like “Sleep By Windows” and “Remember I Was Vapour” are directly aimed at his fans, or devotees at any rate, and throughout the record there is the gruelling feeling that this idea of stardom wasn’t really what he signed up for, that he maybe feels emptier than he did when he was thrashing out punk guitar with Tubeway Army and earning only a crust. Daft Punk released an album called Human After All, and while it is not a very good album, its title could be equally applicable to Telekon.

As with other recent entries, there is an uncompromising savagery to this music which puts it far beyond 2013’s idea of mainstream, and its achievement in getting to number one is at the very least admirable. I have to warn you that we are now firmly entering “my time” as far as this tale is concerned and so there may be an unnecessary residual bias on my part towards these records. But it also has to be recognised that this 1980 run of albums is extraordinary to the point of staggering; qualitatively, it’s one of the finest sustained sequences in all of Then Play Long (and is by no means over yet) and maybe the best of its decade (those anticipating unalloyed brilliance through 1981 and 1982 may, I fear, be disappointed; 1981 is one of the downright weirdest years that we’ll do).

And, set against the varying degrees of darkness that its peer albums offer, Telekon really sets new standards for bleakness. The stark sleeve design – red ink on black backgrounds, white dry ice and an airbrushed, vaguely threatening “weapon” which turned out to be a tube from Numan’s mother’s Hoover – is heartbreaking in how much of the “future” it still entails. I think “heartbreaking” is an apt adjective to use here, since the songs are almost all about disappointment and alienation, moving away from who, or what, the singer might once have been.

There are no halfway houses with Telekon; neither of Numan’s mid-1980 singles, “We Are Glass” or “I Die: You Die,” is included – “We Are Glass” pops up on the CD version in between “Sleep By Windows” and “I’m An Agent” and sounds awkwardly out of place, whereas “I Die: You Die” works much better as a bonus track afterthought – and although the music is texturally thicker and fuller than on The Pleasure Principle, with guitars returning to some form of prominence (particularly noticeable on the crunch of “I’m An Agent”), the gloom is also enlarged, and a sort of sustained poignancy is achieved by the use of the ARP Pro-Soloist analogue synthesiser, which provides the “weeping” vibrato that crops up regularly through each track (and is logically reminiscent of Joe Meek).

Hence songs like “This Wreckage” – a strange and backfiring choice for third single - sound both fuller and emptier, Numan’s voice wreathed in greater echoic resonance but virtually empty of any feeling (“Wipe off my face/Erase me…/It’s all just show”) with endlessly wandering and vacillating whole tone chord changes. There is a vastness of nothing about these songs; I am reminded of when I first listened to them, on a train rushing down from Glasgow, through a darkened, storm-tossed, uncaring post-industrial North towards the oasis of Oxford, just a couple of months after the album came out; in between these two cities it felt as though Britain were collapsing, and this was the collapse’s non-erasable soundtrack. The chorus is Japanese for “leave you soon,” sung wistfully over triplicate descending raindrops. You’d never think there was a future beyond this song.

Nor does the rest of Telekon offer much in the way of a future, at least not intentionally – note how this is the third album in this 1980 sequence to feature the head of its artist on the cover, looking somewhat startled and afraid. But where Peter Gabriel solved his dilemma by turning himself, or his self, towards the wider world, Numan seems keener to shut out any notions of “the wider world.” “The Aircraft Bureau,” for instance, focuses on a ghost D-day pilot, warning anyone thinking about getting on his ‘plane to take care they don’t end up like him. Musically, gentle piano filigrees play against fulsome Minimoog and Polymoog melancholy; Simple Minds “et al” are credited with the handclaps towards song’s end (who would have thought Simple Minds, of all groups, would make such a discreet, sideways entrance into this tale?). As with a lot of Numan’s other work of the period, the singer himself is hardly present, instead giving prominence to a bright, Japanese electro melody played by synths and strings (violin and viola are used with greater architectural grace and logic than on The Pleasure Principle).

The title track, presumably inspired in part by Aladdin Sane – both concept and song - is so fearlessly avant-garde that one seriously, albeit briefly, wonders what went wrong with consumers of music after 1980; the exclamation “This was a number one album??” makes yet another appearance. The music is stealthy, wary, the lyrics random (“My dog went AWOL, I blame you all”) but uncomfortable (“It’s hard to breathe, it’s hard to breathe”). Chris Payne’s piano seems to fight against the rest of the song; atonal, sparse, out of tempo or key, as though Misha Mengelberg had dropped into a Yellow Magic Orchestra session. The effect is most disturbing.

Numan fans say that he was daft not to release “Remind Me To Smile” as a single; it’s the catchiest song on the record, with especially adventurous bass playing from Paul Gardiner, but there’s an element, perhaps of distrust, which prevents it from being a singalong. Numan’s barked “We must laugh” sounds like “We are glass,” and the call-and-response tug-of-war with the backing vocalists (the rest of his band) becomes stranger and more claustrophobic as the song proceeds. “Sleep By Windows,” however, ticks along malevolently (particularly on the part of Ced Sharpley’s quietly threatening percussion) and here Numan sounds as though he wants to block everybody, and everything, out of his life; the fans who camp outside his house or his dressing room, whom he will never let in (“Do you cry?/Do you dream?/Do you…did you?” – although he eventually did marry a fan). The risk is of course that he closes down the whole world as a result.

Side two begins with the very rocky (not rockist) “I’m An Agent,” the closest the record comes to 1980 Ultravox. Then comes the great whale of melancholia: “I Dream Of Wires,” covered later that year by Robert Palmer, which may well be about the good, vanished times when nobody knew who Numan was but he was happy (“New ways, new ways…/I dream of wires, the old days”) but also carries an element of apocalypse aftermath; there are several occasions on this side when Numan sounds like the last man alive, and on “Wires” he addresses this explicitly. “The last electrician alive” he sings, or intones, and this is not the album’s only reference to the Walker Brothers song (on “This Wreckage”: “My mirrors tarnished with ‘no-help’“). Yet, singing it, he hardly seems bothered, as if dozing off for an afternoon nap; the song fades out with a dolorous whistle superimposed on a post-Low funk rhythm track. “Remember I Was Vapour” is what BS Johnson might have called (if he’d had the sense to live to hear it) Numan’s “You’re Only Human Like The Rest Of Them” song, but again looks towards a post-human future, where nothing is left but receptors and signifiers (and doesn’t Numan sound curiously cheerful chanting out his “Remember I had reasons” lines?).

“Please Push No More,” which I remember carried quite a sizeable resonance as a performance piece, sounds, however, like the last song ever recorded. Over nothing much beyond Denis Haines’ piano, Gardiner’s quiet bass and Numan’s own delicate Minimoog, the singer once more muses on the album’s themes of faces, glass and identity; he is shutting out his audience as gently and irreversibly as the Roger Waters of 1980, putting the last brick in that wall (from “Sleep By Windows”: “I could talk about my programme/Where everything is white”). “I Was Only Joking,” to put it mildly, isn’t even on the same continent (literally). Nor does the closing “The Joy Circuit” give much, if any relief; Numan sings about reasons, pain, crying and dying as though this is all that life, and perhaps fame, have left him with. As the track reaches its climax, Payne’s violin and Rrussell Bell’s viola turn manic and hyperactive, cruising an asteroid hoedown like Fairport Convention on a spaceship. The music, and its artist, fade into silence.

And it’s possible that the silence, the loneness (as opposed to solitude), is all that the Gary Numan of 1980 wanted. In this instance, the bonus tracks on the CD edition are instructive. The original concept for the album was a man who could move any object just by thinking about it but who, intoxicated by his power, eventually destroys both the world and himself. But Numan seems to have reshaped that notion into a more person-specific idea of wanting to be left alone; and so the CD trails off with three instrumentals, the last being a moderately respectful reading of the first of Satie’s “Trois Gymnopedies”; placid (but not unthreatening) electronics, a plaintive piano, no vocals, no need to explain or apologise for one’s self.

Before this decade is out, another Then Play Long entry will come along with a similar theme, including a track entitled “Leave Me Alone.” At the other end of this decade, the twenty-three-year-old Trent Reznor will listen doggedly to Telekon every day while putting together Pretty Hate Machine. In the next decade, another exhausted superstar will scream with dissatisfaction at fame, recognition and compromise – and he, who presumably would have heard Telekon in his youth, will, like the performer of “Leave Me Alone” but unlike Numan, not survive. This record foresees all of this, and comes with its own inbuilt warnings. Is this really what he wanted when he looked down at the park, and didn’t yet realise that he was gazing into a mirror?
Posted by Marcello Carlin at 13:22